At Auschwitz, Francis quietly begs God's forgiveness 'for so much cruelty' 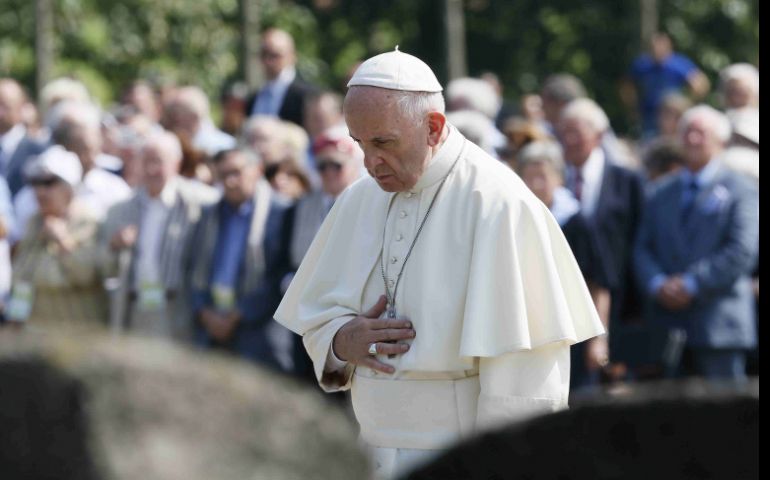 Pope Francis prays at a memorial to victims at the Birkenau Nazi death camp in Oswiecim, Poland, July 29. (CNS photo/Paul Haring)
This article appears in the Francis in Poland feature series. View the full series.

OSWIECIM, Poland — Pope Francis silently begged God for mercy on humanity's behalf in a symbol-laden visit to the World War II concentration camps of Auschwitz and Birkenau Friday, asking forgiveness "for so much cruelty" in the place where at least 1.1 million were killed in the Nazis' inhuman extermination program.

Entering the Auschwitz camp alone on foot, the pontiff passed under the infamous arch of metalwork that declares Arbeit macht frei ("Work sets you free") as the sun caused several of its letters to appear in shadow over his white cassock.

The pope then traveled in a small vehicle to a red-bricked area of buildings inside the barbed-wire enclosed camp that was built solely to torture prisoners. He stopped and exited the vehicle to sit near what is known as the "Death Wall," where the condemned were led by soldiers before being shot and executed.

Francis sat in the spot, head bowed low in prayer, for more than ten minutes. Getting up slowly, he walked towards one of the buildings, touching its outer brick wall with both of his hands.

The pope came to the camps as part of his Wednesday-Sunday visit to Poland, where he is staying in Krakow, 30 miles away, for World Youth Day. He chose not to speak publicly during Friday's visit, wanting instead to remain silent in the face of such tragic history.

In his only words of the two-hour trip, the pontiff wrote in Spanish in the museum's commemorative book: "Lord, have mercy on your people. Lord, forgiveness for so much cruelty."

Historians say the total number killed at the camps could have reached 4 million. It is estimated that ninety percent of Poland's nearly 3.5 million Jews at the time were killed by the Nazi regime.

During the visit, Francis met individually with about a dozen survivors of the camps, taking several moments with each and offering an embrace and kisses on the cheeks. The last survivor to greet Francis gave him a lit candle that he then placed inside a lamp set near the Auschwitz wall.

Francis then went to the cell where martyr St. Maximilian Kolbe, a Franciscan held at the camp who offered himself in place of another person chosen to die, was starved for weeks before he was killed by lethal injection.

The pope entered the cell alone, kneeling before a small image of the saint and remaining there for five minutes.

Francis then traveled to Birkenau, the nearby camp that was built as the Nazi regime expanded its detention and extermination program.

Set inside a several-mile-wide open field, the camp is bounded by layers of barbed wire and wooden guard towers and marked by long brick buildings that housed the prisoners in squalid conditions. As you walk through the area, your field of vision is filled with wire, brick, and grass.

The pontiff visited Birkenau's International Monument to the victims of Fascism, set among the ruins of where the camp's two largest gas chambers were located. A stark stone platform of various levels, the monument is bounded on one side by 22 large plaques stating in 22 separate languages that the place should be "a cry of despair and a warning to humanity."

Francis walked slowly along the line of plaques, holding his right hand over his chest as he paused at each for several moments. At the end of the line, he placed another small candle on one of the platforms.

As the pope bent to put the candle on the stone, a Rabbi slowly sang aloud the Hebrew words of Psalm 130: "Lord, hear my cry! May your ears be attentive to my cry for mercy."

"If you, Lord, keep account of sins, Lord, who can stand?" the song continued. "But with you is forgiveness and so you are revered."

Vatican | At Auschwitz, Francis quietly begs God's forgiveness 'for so much cruelty'

Vatican to form commission on abuse