Skip to main content
News
A version of this story appeared in the June 3-16, 2016 print issue under the headline: "Mercy behind prison walls" . 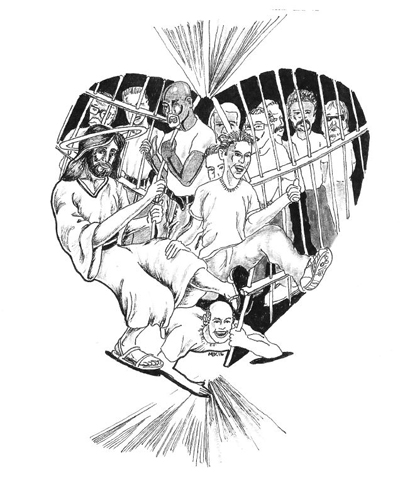 The cover art for Mirrors of Mercy, a book created by the Catholic Bethany Community in Massachusetts' Norfolk State Prison

On the corporal works of mercy "to do" list, the one least likely to be fulfilled by countless Catholics during the designated Year of Mercy is that of visiting those in prison.

"There are no prisons in my vicinity."

"What good would it do; they deserve to be locked up."

The list for avoiding this Jesus-recommended and Pope Francis-encouraged activity is as long as some criminals' rap sheets. But "fear not," the inmates at Norfolk State Prison are reaching out to the community in their own way during the Catholic church's proclaimed Year of Mercy, which runs to Nov. 20.

The answers she received came in the form of essays, poems, letters, litanies and drawings from 27 contributors -- most of them inmates, but including a few men and women volunteers, and a chaplain. All of the respondents are members of the Catholic Bethany Community, the first lay chapter of the Dominican Order to form inside the walls of a prison and one dedicated to God's mission of mercy. The result of their contemplation and handiwork has been the publication of the book Mirrors of Mercy. The writers use only their first names in the book.

The Bethany Community takes its name from the Dominican Sisters of Bethany, formed by Blessed Jean-Joseph Lataste, a Dominican priest who ministered to women prisoners in Cadillac-sur-Garonne, France, in the 1860s.