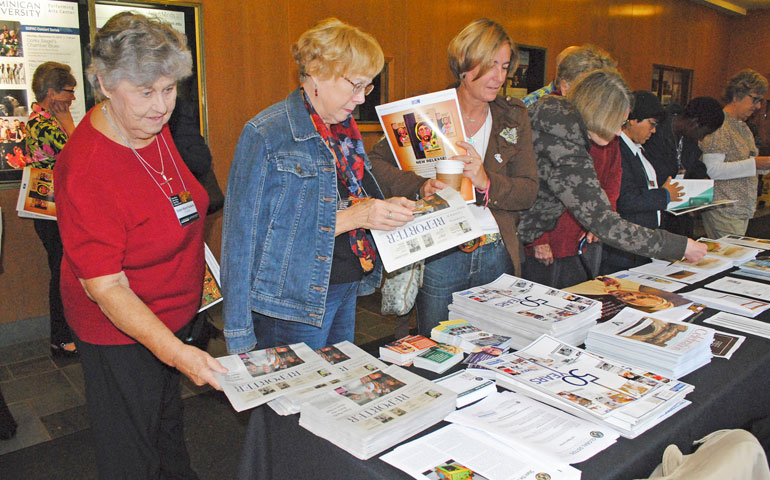 The Lund Auditorium of Dominican University, co-sponsor of the conference, was filled to near capacity for the daylong event in River Forest, a western suburb of Chicago.

The conference was closed with a rousing "call to action" delivered by Benedictine Sr. Joan Chittister. Using the text of the Gospel reading for Mass for the 30th Sunday in Ordinary Time (Mark 10:46-52), Chittister challenged participants to rise up and answer the call of Jesus as the blind man Bartimaeus had done.

She offered reflections on six other Scripture passages in which the faithful of the Old and New Testaments were called to "rise up."

Her conclusion was: "The work of real renewal is ours. We cannot blame God for what we do not do to save ourselves ... and unless we care enough about life to risk our own for it, the entire community is in danger. Unless there are those here who are willing to think anew, to begin again, in situations [of crisis and change] the people cannot be saved -- unless some rise up."

The full text of the talks will be available on the NCR website.

At the event, NCR board chairman Tom Bertelsen announced the launch of a new fund for independent Catholic journalism named to honor the work of longtime NCR editor and publisher Tom Fox. (See story)

A version of this story appeared in the Nov 6-19, 2015 print issue under the headline: NCR readers challenged to 'rise up'.