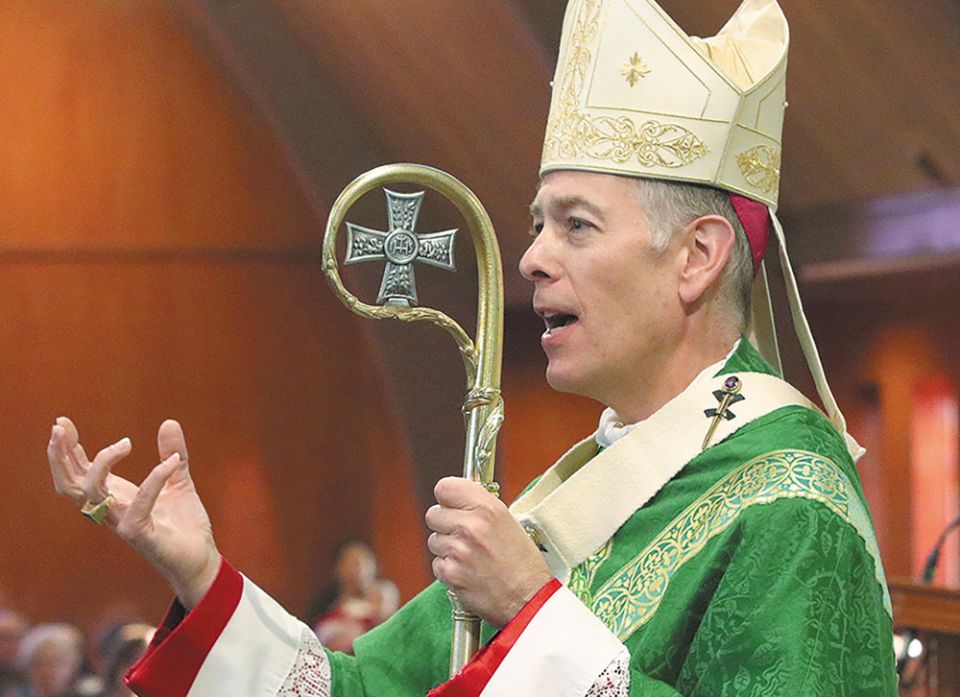 Archbishop Alexander Sample of Portland, Ore., pictured in a 2017 photo, issued a letter Aug. 20 on clergy sex abuse. He called for a lay-led investigation into the church abuse scandal and for more prayer among clergy. (CNS/Ed Langlois, Catholic Sentinel)

Portland, Ore. — Portland Archbishop Alexander Sample issued a letter Aug. 20 to western Oregon Catholics in which he expresses shock, anger and discouragement over revelations of clergy sex abuse in other parts of the country.

"I have been shaken to the core of my soul over them," Sample wrote in the five-page letter, which includes a call for renewed care of victims, reinvigorated prayer life among priests and an outside lay-run investigative body. Sample also said that bishops should be held to the same standards as priests.

A grand jury investigation about decades of sexual abuse claims in six Pennsylvania dioceses followed revelations about crimes and misdeeds alleged against Archbishop Theodore McCarrick, a former cardinal and retired archbishop of Washington.

Abuse scandals, including cover-ups by bishops, also have shocked and saddened Catholics in Chile, Ireland and Australia in the past year.

"These horrific revelations are particularly painful in light of what victims in our own archdiocese have suffered and the impact that sexual abuse has had on the church here in western Oregon," the archbishop wrote in the five-page letter. "I am sorry beyond words for the harm that has been done."

The archbishop urged Catholics to read a letter from Pope Francis, which was issued the same day. The pope called what has happened part of the "culture of death."

"These most-recent accusations and details expose — yet again — certain systematic and profound failures of episcopal leadership in our church," Sample wrote. "These failures are both institutional and spiritual in nature, and date back many decades."

Sample said that McCarrick was entrusted with pastoral responsibility and care but instead acted "in a heinously sinful and criminal manner."

"It is also an institutional failure that someone like this could rise to such a high level unimpeded and without being challenged or held accountable," Sample wrote. He also was critical of the cover-ups the Pennsylvania report said were carried out by church leaders.

"All of these allegations should have been brought to light much sooner; and then dealt with swiftly, justly and transparently," the archbishop wrote.

He called clerical sex abuse a spiritual failure in that men called to be good shepherds instead act "in such a gravely sinful, evil manner."

The archbishop wrote that when clergy and religious lose their personal relationship with God, careerism, clericalism and "ways of life at odds with the Gospel" often result.

Those who committed the sinful and illegal acts, or covered them up, are culpable, and at the same time their deeds are the work of Satan, the archbishop wrote.

"In the history of the church, whenever there was a moral or spiritual crisis, God has raised up saints who became agents of reform. This is a time for saints," the archbishop wrote.

Saying he will get more serious about prayer, penance and sacrifice, he called for a "profound spiritual renewal" among clergy. He urged priests every day to pray the Liturgy of the Hours, spend an hour with the Blessed Sacrament and pray the rosary.

"We who are clergy must reject all tendencies toward a worldliness and secularity that is inconsistent with our vocation," he wrote.

He also asked the lay faithful to pray, acknowledging that they are not responsible for the scandal.

The archbishop offered a plan of action that begins with caring for and supporting victims of abuse.

"Whatever we do as a church to address these atrocities, we must keep in mind those who have been seriously harmed," Sample wrote. "They have suffered greatly at the hands of those they should have been able to count on for spiritual care and support and in whom they should have experienced the love of the Good Shepherd."

He urged that bishops be held to the same standards as priests in matters of improper behavior or abuse, with amendments to the charter that guides policy.

He also called for an outside investigation process with the "substantial involvement" of lay experts. "A body investigating itself does not inspire confidence in the objectivity of the outcome," he wrote. Those who knew about abuse and did little or nothing should be held accountable, Sample said, adding that all reports of misbehavior or abuse should be properly investigated.

The archbishop called the Archdiocese of Portland's child protection policies, forged after a scandal more than a decade ago, "solid and extensive."

The archbishop urged anyone who has been abused by a church worker to come forward to the archdiocese's Office of Victim Assistance. "We want to help you," he wrote.

"In dealing with all of this some are quite understandably tempted to give up on the church," the archbishop concluded. "Yet our faith is finally in God, not in individuals who fail to live up to their calling in Christ."

A Mass of healing for victims of sexual abuse is scheduled for St. Mary Cathedral of the Immaculate Conception in Portland Aug. 26.

Langlois is managing editor of the Catholic Sentinel, newspaper of the Archdiocese of Portland.

US Catholic bishops adopt process for reviewing misconduct of bishops