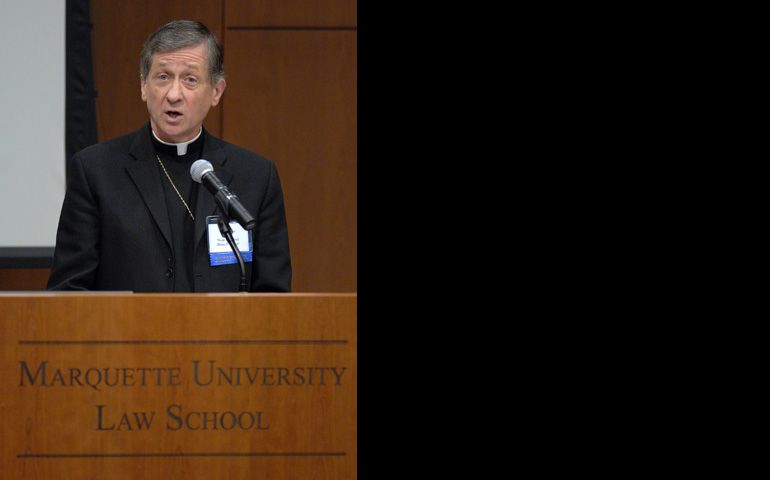 Chicago Archbishop-designate Blase Cupich speaks at Marquette University Law School in Milwaukee during an international conference on the clergy sex abuse scandal in April 2011, when Cupich was chair of the bishops' Committee on Protection of Children and Young People. (CNS/Marquette University Law School/Mike Gryniewicz)
This article appears in the Cupich to Chicago feature series. View the full series.

During the introductory press conference Sept. 20 of the next leader of the Chicago Catholic church, Blase Cupich was, unsurprisingly, asked about the sexual abuse of minors by clergy.

The archbishop-designate responded that he is committed to protecting children and bringing "healing to people who have been victimized by clergy."

Cupich then added: "I am not asking people to say that all of a sudden they find me a credible individual because they really don't know me. I will just say that I will work hard at this and make it an important part of my ministry."

To better understand whether Cupich might fulfill that pledge requires an examination of his track record on handling allegations and instances of clergy sexual abuse, one that includes stints in national positions as well as a lawsuit against former diocesan lawyers and a mediated settlement for future claims.

From 2002 to 2005, he served on the U.S. Conference of Catholic Bishops' ad hoc Committee on Sexual Abuse. That position placed him among those who in June 2002 drafted the Charter for the Protection of Children and Young People, otherwise known as the Dallas Charter.

It also placed him in a working relationship with the National Review Board, a group of 11 laypeople selected by the bishops at their June 2002 meeting in Dallas. Their task required they oversee the implementation of the charter in all dioceses and the Office for Child and Youth Protection, commission studies about the nature and scope of the sex abuse problem, and offer recommendations to the bishops' conference.

Among the inaugural members was Illinois Supreme Court Justice Anne Burke, at the time an appellate court judge. Burke recalled her stint with the review board (2002-2004) as one of struggle in arranging bishops' cooperation for interviews and to provide diocesan files for the board's mandated work. In one instance, New York Cardinal Edward Egan declined to meet or celebrate Mass with board members during a January 2003 visit, his spokesman stating: "Their offices are in Washington and he will meet with them in Washington."

In contrast, Burke said Cupich urged cooperation and "tried to get his brother bishops to work with us."

"He happened to be the only bishop at that time for our board that actually said 'Thank you' to us for our work, and understood the complexity of the issue," she told NCR.

From 2008 to 2011, Cupich served as chair of the bishops' renamed Committee on Protection of Children and Young People. In May 2010, he wrote in America magazine about the 12 things bishops have learned from the abuse crisis. Among them:

9. Bishops need to resist the defensiveness that institutions often fall back on in crisis moments. Resorting to a conspiratorial interpretation of attacks and adopting a "circle the wagons" approach only prolongs a problem and does nothing to settle it or heal the victims.

Since Cardinal Francis George submitted his resignation in 2012, Burke, like many others, speculated with friends and colleagues who might replace him as shepherd of the nation's third-largest diocese.

"My first pick was Cupich," she told NCR, adding that his selection has strengthened her "cautious optimism" in Pope Francis and "emboldens me to think that his conduct now is also matching his words."

Others have not been as optimistic.

"The proof still remains in the pudding," said Kristine Ward, chair of the National Survivor Advocates Coalition, in a Sept. 22 statement.

"No matter what descriptive label is affixed to this choice, or parallel peering into the motivations of Pope Francis, or turn in the road that may be imagined or real, we think it suffices to say only these two words: we'll see," she said.

Likewise, the Survivors Network of those Abused by Priests expressed skepticism and criticized Cupich's tenure as child protection committee chair for not further strengthening the charter and not taking action in 2011 related to a Philadelphia grand jury report and the failure to report in Kansas City, Mo.

"In each case, evidence showed that the bishops' abuse 'charter' was ineffectual. Yet Cupich said and did virtually nothing," Kate Bochte of SNAP said in a statement.

Bochte also challenged Cupich to provide explanations why his current Spokane, Wash., diocese lists 28 priests (both diocesan and religious order) as credibly accused while other records suggest the number closer to 39.

Cupich arrived in Spokane in September 2010 after spending a dozen years as bishop of Rapid City, S.D. A month later, he entered the diocese into mediation in an attempt to fund future claims of sexual abuse and stave off possible foreclosures.

A 2007 bankruptcy reorganization plan, arranged under Bishop William Skylstad, paid out $48 million to settle claims and placed an additional $1 million in a future claims fund, with 22 parishes offering their properties as collateral should awards exceed that figure. By Cupich's arrival, the fund was nearly exhausted and legal fees in ongoing appeals draining finances further.

Mediation resulted June 2012 in a $1.5 million settlement, a withdrawal of all appeals, and no foreclosures. Cupich told NCR a month later he drew four lessons from the two-year process: "Understand that you are not going to control the outcome ... understand that this is going to take a long time to accomplish ... You cannot get mad ... revisit your goals."

Others involved in mediation credited Cupich for his openness and candidness as a negotiating partner. That included victims' attorney Tim Kosnoff, who told NCR on Monday that the bishop "didn't hide behind his lawyers. He talked to us, and he made an effort to try and build lines of communication ... That's sort of rudimentary, but so many bishops don't understand that."

Kosnoff also acknowledged that Cupich took an "unprecedented" step later that year in suing the law firm that represented the diocese for malpractice during its 2004 bankruptcy proceedings.

According to The Associated Press, the diocese's suit alleges the firm employed a faulty strategy by underestimating the number of future claims and had a conflict of interest by representing the diocese in bankruptcy while simultaneously defending Skylstad against abuse-related negligence and cover-up accusations. It is set for trial in February.

Still, Kosnoff said he gives Cupich a mixed grade on handling abuse, largely because of his position related to ongoing litigation that the diocese was not responsible for monitoring and supervising abusive religious-order priests.

Looking ahead to Chicago, the archdiocese has paid in excess of $100 million in the last 25 years. In January, it released 6,000 pages of documents related to 30 priests, half of whom have died; 95 percent of their cases predated 1988. The archdiocese has stated numerous times no priest with a substantiated allegation of sexual abuse of a minor remains in ministry.

Burke said what the archdiocese needs going forward is greater dialogue among its leaders, priests and parishioners on the abuse issue.

"You can't not talk about things. Every family has to talk about issues. Why shouldn't we as a church being talking about this with the laypeople? And never once in the diocese in Chicago was this done," she said.

SNAP has encouraged Cupich to relocate his installation Mass from the Holy Name Cathedral to one of the parishes where former priest Daniel McCormack sexually abused children.

"We beg Cupich to prod his flock to aggressively seek out others McCormack may have assaulted and who may still be suffering in silence, shame and self-blame," the group said in its statement. "(That kind of outreach is effective, but we have rarely seen a bishop do it.)"

Cupich at installation Mass: Jesus invites all to take risk 'of being more'

Sydney archbishop: Despite reports, no link between celibacy, abuse