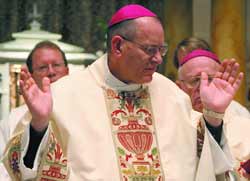 Allegations in a lawsuit recently filed against the Baker, Ore., diocese might sharpen focus on the core reason the diocese is only one of two in the United States currently not in compliance with the U.S. bishops’ Charter for the Protection of Children and Young People.

According to the 2009 audit by the bishops’ Secretariat of Child and Youth Protection, the Baker diocese did not meet the requirements of the charter’s Article 12, which deals with safe-environment training. The diocese declined to be audited in 2010.

In its 2009 report, the secretariat said that Bishop Robert F. Vasa “feels it’s inappropriate to provide any type of sex education to any prepubescent child.”

The report stated that Vasa, who was named coadjutor bishop of Santa Rosa, Calif., in January, “continues to feel strongly that it is the parents’ responsibility to provide safe-environment training to their children and not the church’s responsibility.”

“We do not disagree that parents are the primary educators of their children,” the executive director of the secretariat told NCR, “but we do not see that as a conflict” with sex-abuse-avoidance training provided by other sources as required by the charter.

“It is only in that very narrow thread of how to deliver training to the children” that Vasa and the charter conflict, said executive director Teresa Kettelkamp.

“We have had to agree to disagree,” she said, adding that she has no doubt about the bishop’s “passion for the safety” of children in care of the church.

A January court complaint against Vasa as corporate sole of the diocese and against St. Francis of Assisi Parish in Bend, Ore., seeks damages for the sexual assault of twin 5-year-old girls by a 12-year-old boy May 29, 2009, during a retreat at the parish. (See related story.)

Then-associate pastor Fr. Luis Flores-Alva is quoted in the complaint as asking the mother of the girls during a meeting at the rectory shortly after the molestation why her 5-year-old daughters “would allow a boy to touch them.”

In a remarkable coincidence of timing, a guest editorial in the Bend daily newspaper the day after the incident harshly criticized the Baker diocese and Vasa for not meeting safe-environment training requirements for youth.

Written by St. Francis parishioner Thomas Dolezal, the commentary charged that Vasa “has refused to provide this training because he feels that ‘teaching children about sexual predators instills fear in them.’ He is also quoted as stating that ‘empowering kids to keep themselves safe’ is not appropriate because predators are ‘bigger and smarter.’ ”

William Skylstad, retired bishop of Spokane, Wash., and apostolic administrator of the Baker diocese until a new ordinary is named, told NCR on April 19 that he had recently spoken with Kettelkamp.

He said he plans to meet soon with the Baker review board overseeing charter implementation and clergy sexual abuse matters. “We will continue to address the issues and look to compliance,” he said.

“Some have thought the charter was too strict,” said Skylstad, who was vice president of the U.S. Conference of Catholic Bishops when the document was ratified in Dallas in 2002. “But I think it has been a great document for the church, and we will continue to refine its implementation and make sure we are all accountable to it.”

While Skylstad led the Spokane diocese, it became the third U.S. diocese forced into bankruptcy by the weight of sex abuse lawsuits. The diocese filed for Chapter 11 in 2004, reached a $48 million settlement with victims of sexual abuse and re-emerged from bankruptcy in 2007.

[Dan Morris-Young is a West Coast contributor to NCR.]