Francis convenes religious institute treasurers for summit on use of money 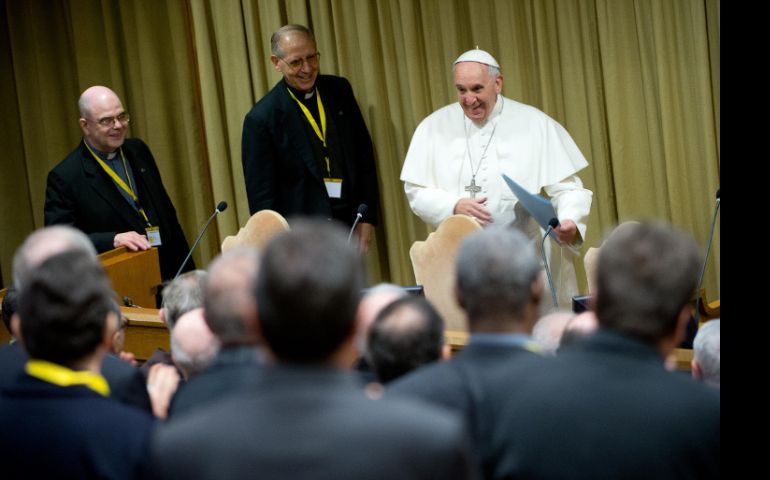 Pope Francis arrives for a meeting with 120 superiors of men's religious orders at the Vatican Nov. 29, 2013. Standing next to the pope is Fr. Adolfo Nicolas, superior general of the Society of Jesus. (CNS/L'Osservatore Romano)

Vatican City — Pope Francis has asked the treasurers of the thousands of Catholic religious orders around the world to meet in Rome this weekend to discuss how they can use their orders' financial assets "for the service of humanity."

The first-of-its-kind summit puts an unusual focus on the wealth of the orders. Last fall Francis pointedly asked leaders of religious orders to reevaluate management of their assets, especially empty monasteries and convents which in recent years have frequently been turned over to non-religious pursuits, such as hotels and restaurants.

The event, to be held near the Vatican March 8-9, has not been announced publicly but is expected to draw hundreds of representatives of the estimated 900,000 men and women religious globally. It is to have 15 talks on issues ranging from the use of church property, to financial debts, to economic solidarity.

"The economy often plays a defining role in human history and in religious history, and particularly in the culture of this present day," states a letter sent from the Vatican's Congregation for Religious to superiors of orders around the world announcing the meeting.

"On the one hand, within this culture, religious men and women are almost induced or forced to be involved in the mechanisms of the laws of modern economics," the letter continues. "On the other hand they are aware that they can run the risk of losing their true identity."

The letter, dated Jan. 1, is signed by Archbishop Jose Rodriguez Carballo, the secretary of the congregation, known formally as the Congregation for Institutes of Consecrated Life and Societies of Apostolic Life.

The letter — sent in Italian, English, and Spanish, depending on the working languages of the separate orders — states in bold type that the meeting was “requested by the Holy Father.”

While the meeting has not been made public, NCR obtained copies of the announcement letter and the schedule of the event, which is titled: "The management of the ecclesiastical goods of Institutes of Consecrated Life and Societies of Apostolic Life, for the service of humanity and for the mission of the Church."

Although it is unknown how many treasurers are coming to Rome for the event, one religious order member expecting to take part said on background that the congregation had to close registration for the meeting because of space concerns.

Included among 19 speakers at the event are three from the U.S.: Dominican Sr. Peggy Ann Martin, senior vice president for sponsorship and governance for Denver-based Catholic Health Initiatives; Kerry Robinson, executive director of the National Leadership Roundtable on Church Management; and Indianapolis Archbishop Joseph Tobin, a member of the Redemptorist order.

Tobin, who preceded Carballo as secretary of the Vatican congregation from 2010-12, is to speak Sunday on "The charism and goods of an institute and their relationship to the local church."

Francis has critiqued the global economic system numerous times during his papacy, even questioning the capitalist system altogether in his apostolic exhortation Evangelii Gaudium ("The Joy of the Gospel").

Mentioning specifically "trickle-down theories," the pope wrote in the exhortation that such theories express "a crude and naïve trust in the goodness of those wielding economic power and in the sacralized workings of the prevailing economic system."

Speaking at an assistance center for foreign refugees in Italy in September, Francis called on religious orders specifically to reevaluate their asset management.

"Empty convents do not serve the church so that they can be turned into hotels for earning money," Francis, a member of the Jesuit religious order, said then. "Empty convents are not ours, they are for the flesh of Christ, who are the refugees."

Among other presentations listed for the Vatican event:

Among others taking part in the event: Cardinal João Braz de Aviz, head of the Vatican congregation; Jesuit Fr. Adolfo Nicolás, the head of the Jesuits; Msgr. Alberto Perlasca, an official at the Vatican's secretariat of state; and Marco Impagliazzo, president of the Comunità di Sant'Egidio.

Martin is to speak Saturday on advantages and disadvantages for institutes of having ministries recognized as a "public juridic person," a formal arrangement that allows religious order ministries such as healthcare to be ultimately overseen by the Vatican and not individual orders.

The weekend meeting is to occur with simultaneous translation in Italian, English, and Spanish.