by Joshua J. McElwee
Accountability
Vatican
This article appears in the Francis in Morocco feature series. View the full series. 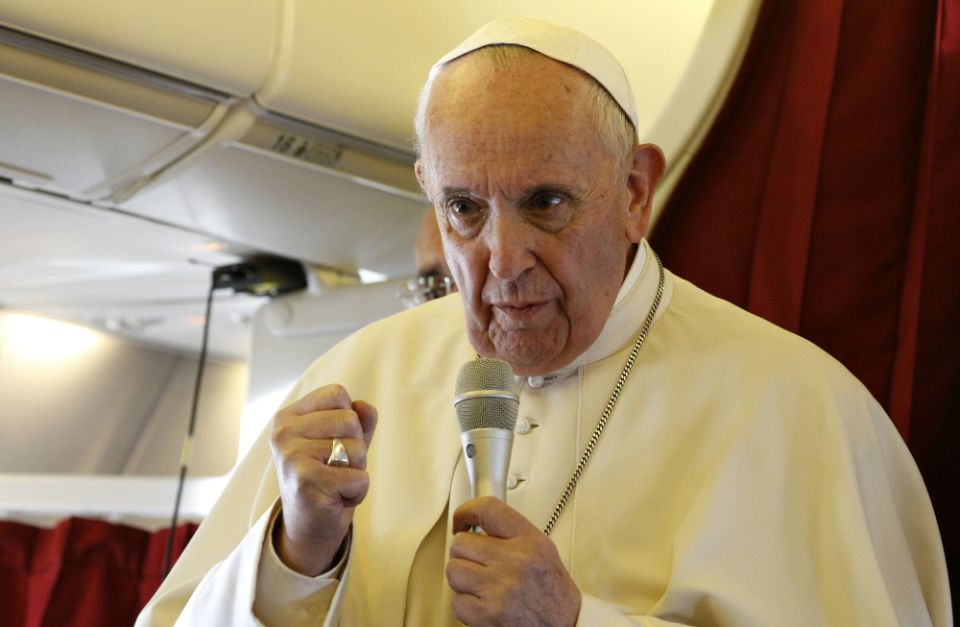 Editor's note: This story was updated March 31 at 4:20 p.m. to include additional comments from the papal press conference

Aboard the papal flight from Morocco — Pope Francis has indicated he will reconsider his decision not to accept the resignation of a French cardinal convicted of covering up sexual abuse after the prelate's appeal is heard.

In a press conference aboard the papal flight back to Rome after a two-day visit to Morocco, the pontiff also admitted that Lyon Cardinal Philippe Barbarin may be guilty, but asked for the continued observation of presumption of innocence during the appeal.

"In classic global jurisprudence there is the presumption of innocence during the time that the case is open," the pope said.

"When the second court gives its sentence, we will see what happens," he said. "Maybe he is not innocent. But there is the presumption."

Barbarin, who maintains his innocence, was convicted by a French court earlier this month of covering up for the notorious abuser Fr. Bernard Preynat. The cardinal, who received a six-month suspended sentence, met with Francis in Rome March 18 to hand in his resignation, which the pope refused.

The French prelate announced afterward that two agreed that he would instead take a leave of absence from his duties as he appeals.

Francis is facing unprecedented global scrutiny over his handling of clergy abuse cases. Barbarin is one of three cardinals, historically the Catholic Church's highest and most respected officials, who are facing legal proceedings.

George Pell, who for decades was considered Australia's most influential prelate, is serving a six-year prison sentence after being convicted in December of sexually abusing two boys decades ago. He maintains his innocence and is expected to try to appeal the verdict.

Ricardo Ezzati, who resigned as the archbishop of the Chilean capital of Santiago March 25, is under investigation by authorities in his country for possible efforts to cover up abuse cases.

Although the pope did not speak about the two other cases in his remarks aboard the papal flight, his comments appear to reveal that he will refrain from accepting resignations of bishops convicted of abuse or cover-up until they exhaust their appeals.

Francis said he felt he could not yet "ethically accept" Barbarin's resignation. He said it was important to protect the presumption of innocence so there would not be "convictions in the media."

The pope said that such media "convictions" had "ruined the lives of some priests, who were then judged to be innocent."

"Before making a conviction in the media, think twice," he advised the journalists on the flight.

Francis' remarks on Barbarin's case came in a 40-minute press conference in which the pope likewise renewed his criticism of governments that seek to build walls to keep out refugees fleeing violence and famine, and praised Morocco's Muslim authorities for their pursuit of interreligious dialogue with Christians.

The pope also made his first direct comments about his decision last year to delay a series of votes by the U.S. Conference of Catholic Bishops on proposals intended to address aspects of the clergy abuse crisis.

Francis said the proposals, which included the creation of a new commission to review allegations of abuse made against bishops, were "too much" like those that could be expected from a nonprofit organization and "neglected" the spiritual dimension of fighting the evil of sexual abuse.

"How do you take responsibility?" asked the pope. "With disciplinary measures, with prayer, penitence [and] self-evaluation."

Francis had previously alluded to his decision to delay the proposals, but had not directly addressed it. In a January letter to the U.S. bishops, he said the prelates would not be able to regain their credibility by "simply creating new committees or improving flow charts."

Some American prelates have also criticized the conference's proposals.

Chicago Cardinal Blase Cupich has noted that the conference has no authority to mandate that bishops participate in the suggested new commission, and has proposed instead that the Vatican empower metropolitan archbishops to review cases against bishops in their regions.

The bishops' conference is expected to vote on the two separate proposals at a special assembly in July.

During the flight, Francis said that while Catholics must evaluate all the ways to address clergy abuse, they must also acknowledge that "there is a point at which it cannot be understood without the mystery of evil."

Francis spoke about border walls in response to a question about the barbed-wire fencing that separates Morocco from the two Spanish enclaves of Ceuta and Melilla that sit on its northern shores, and U.S. President Donald Trump's threat last week that he might close the U.S.-Mexico border.

A version of this story appeared in the April 19-May 2, 2019 print issue under the headline: Francis may reconsider convicted cardinal's resignation .