Turn away from sin and be faithful to the Gospel 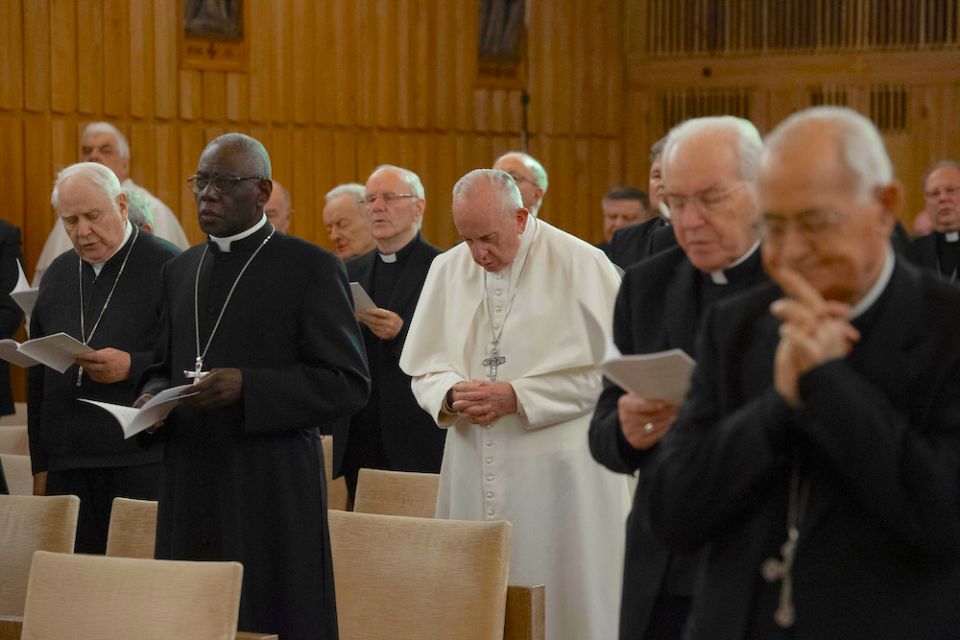 We've heard it so many times we don't even hear it anymore. "Turn away from sin and be faithful to the Gospel."

The Holy Father resumed the Lenten theme just a few days ago. He called corruption a "plague." He stressed the gravity of fighting corruption, the necessity of controlling expenses, and the importance of paying attention to the poor. He urged his listeners to render their service "with serenity and seriousness," and to see Christ as a "witness of truth and justice."

He was speaking to a bunch of accountants. He met in formal audience members of the Italian Court of Audit, the government agency that oversees public finances.

You don't have to be a complete cynic to transfer Francis's advice to the Catholic Church.

That's the heartbreak of it all. Francis is one of a multitude of bishops living simply, properly managing his responsibilities, honestly preaching the Gospel. But when there are thousands of bishops — some 5,100 at last count — chances are that every day something will happen someplace to tar the story and obfuscate the Good News. Which of the world's more than 3,000 dioceses, vicariates, prefectures, ordinariates or abbacies will let out the next scandal? It's like waiting for wisdom teeth: you know they are coming, you know they will be big, and you know for sure they will hurt.

Yes, French Cardinal Barbarin (found guilty of cover-up) handed in his resignation, but the pope won't accept it until his appeal runs out. Yes, Australian Cardinal Pell (found guilty of sex abuse) is in jail. Yes, U.S. ex-cardinal Theodore McCarrick is laicized and in a monastery in the middle of Kansas.

But there are other stories in the news every day, mostly involving sex and money. It does save folks the trouble of reading medieval history. There is nothing new going on, it's just we find out about it quickly and, often, in living color.

Leaving all the rest aside, there is a focus on priests and bishops "credibly accused" of abusing minors. Lately, vulnerable adults have been added. So, diocese after diocese, religious order after religious order, is rolling out list after list.

The point: Are the lists complete? Is the focus on the right criteria? The majority of the students and women religious, of the many unfortunate women either raped or who thought they were in love with a priest, have not had their stories told.

Where their stories are told, it is always their fault. They seduced the good father. They caused his downfall. Yes, there are "consensual" situations. But, given what most of the world has done by accepting priest-on-a-pedestal clericalism, can anyone really consent to sex with a priest?

Nearly every day, since the sex summit convened at the Vatican in late February, one or another writer has let loose with more hard news. It is not going to stop. As canon lawyer Thomas P. Doyle, who began working on working on the topic 35 years ago, pointed out, "The reality, whether the pope likes it or not, is that the institutional church cannot fix itself."

I want to believe it can, but I fear the cost. I fear not the financial cost, though steep it is and steep it will continue to be. I fear the emotional cost to the hundreds of thousands of good people, the laity, the men and women religious, the deacons, priests and bishops and, yes, the pope. No matter what finger any preacher points, it can be pointed back at the institutional church. That is the pity of it. That is the tragedy.

Cardinal Peter Turkson, head of the Vatican dicastery for promoting human development, said recently: "It is the poor who pay for the parties of the corrupt."

We are all poor.

[Phyllis Zagano is senior research associate-in-residence at Hofstra University in Hempstead, New York. She will speak Saturday, March 30 at Holy Trinity Church, Washington, D.C., and on April 10 at the Catholic University of Portugal in Lisbon. Her books include Women Deacons: Past, Present, Future (recently published in France and Canada as Des femmes diacres). A study guide for each is available for free download at https://people.hofstra.edu/Phyllis_Zagano/.]

Column | Turn away from sin and be faithful to the Gospel