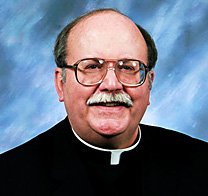 KANSAS CITY, Mo. -- Msgr. Robert Murphy, vicar general for the Kansas City-St. Joseph diocese and a key official in deciding how the diocese responds to cases of sexual abuse, has himself been accused of sexual misconduct, The Kansas City Star reported this morning.

Four years ago, Bishop Robert Finn received a letter from a local man alleging that Murphy had exposed himself and propositioned him for sex during a meeting at a parish rectory in 1984, The Star reported.

Finn wrote the man back saying the man’s allegations were unsubstantiated.

The revelation of the report comes as the diocese is dealing with criticism over the way it handled the case of Fr. Shawn Ratigan, a local pastor who was arrested May 19 on three counts of possession of child pornography.

NCR obtained a copy of the 2007 letter alleging misconduct by Murphy. It was written to Finn by Brian Heydon, a local licensed professional counselor. In it Heydon alleges that Murphy propositioned him for sex after the two met for dinner to discuss a possible vocation to the priesthood.

Upon returning with Murphy to the rectory of a local parish to continue their discussion, Heydon says Murphy changed into a tank top and gym shorts, sat down in a chair facing Heydon, exposed his genitals “out of the side of his gym shorts,” and asked if Heydon wanted to have sex.

In a May 4, 2007 letter responding to Heydon, also obtained by NCR, Finn wrote that while the accusation “has given rise to serious discussions and considerations,” it “does not square with others’ life-long knowledge of this priest.”

“As troubling as these accusations are, I cannot conclude that they are compelling in their most serious claims.”

Calls to Murphy and the diocesan spokesperson, Rebecca Summers, were not returned this morning.

“Bishop Finn’s letter will serve as our comment,” Summers was quoted in The Star report.

Heydon told Finn that he had written to Bishop Raymond Boland, Finn’s predecessor, in 2002 about the incident. Heydon also provided Finn with a copy of that letter, which NCR has also seen. While the 2002 letter makes some allegations, it does not provide any names.

In a press release this morning, the Survivors Network of Those Abused by Priests says Finn should have met with Heydon in person in 2007 to discuss his allegations against Murphy.

“That is what a true shepherd would do.”

Murphy, who has been the diocese’s vicar general since 2005, also serves on the diocesan review board, which is tasked with assessing allegations of sexual misconduct by priests.

Jim Caccamo, who serves at the chairman of that board, told The Star that he remembered Heydon’s claims from 2007, but that the board would not have responsibility in the case. In 2007, Caccamo was serving on the board but was not the chair.

“The review board’s charge is sexual abuse of minors,” said Caccamo, “so other than to know about it, which I do, it doesn’t go to the review board.”

The question of the review board’s actual involvement in cases of sexual misconduct by priests has also been raised in the case of Ratigan, whose computer was first found to have images of child pornography in December.

The principal of the elementary school attached to the parish where Ratigan served also wrote a letter a year ago, addressed to Murphy, detailing concerns teachers and parents had about Ratigan’s interactions with children.

Diocesan officials did not share that letter, or the fact that Ratigan’s computer contained possible images of child pornography, with the review board, Caccamo told NCR last month.

In a press conference May 27, Finn told reporters that Murphy briefed him about principal Julie Hess’ May 19, 2010, letter at the time but that Finn himself had not read it.

Last week a Kansas City candidate for the permanent diaconate withdrew himself from ordination because of the continuing developments in the diocese.

“Because of the recent disclosure of failures within the diocese to protect the people of St. Patrick Parish from harm, I cannot promise respect or obedience that is a part of the diaconate ordination,” wrote Jim McConnell on his parish Web site.

“To me this breakdown in the system that was put in place to protect God's children is inexcusable.”

Ratigan was arraigned May 23 in Clay County court, and he pleaded not guilty to three charges of possession of child pornography. He is scheduled to appear in court again June 16.

In a statement the diocese released May 20, the diocese said that it had sent Ratigan "out of state" for psychiatric care after a suicide attempt -- emergency workers found him Dec. 17 unconscious in his closed garage with his motorcycle running.

When the priest returned to the diocese, Finn said in the letter, Ratigan was sent to a community of the Sisters of St. Francis of the Holy Eucharist with instructions to not attend or participate in events where children were present. Finn also said the priest "did not have his computer or his camera in his possession during this period."

McCarrick report is one small step to dismantling clerical culture