Pope's preacher goes back to basics in talks to bishops 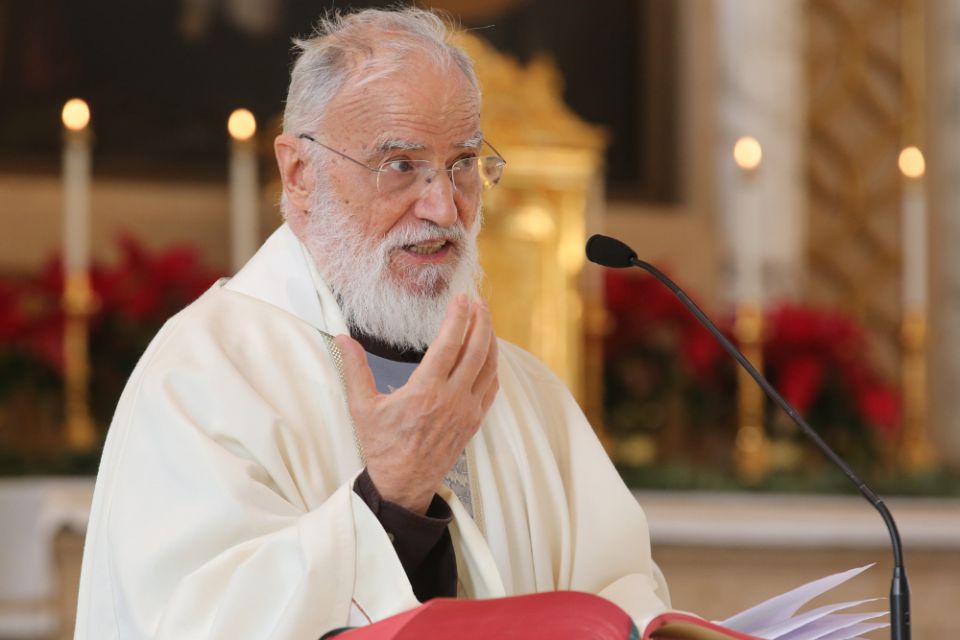 Capuchin Fr. Raniero Cantalamessa, the official preacher of the papal household, delivers the homily to U.S. bishops during Mass Jan. 3 in the Chapel of the Immaculate Conception at Mundelein Seminary during the bishops' Jan. 2-8 retreat at the University of St. Mary of the Lake in Illinois, near Chicago. (CNS/Bob Roller)

Editor's note: The texts of the talks delivered by Capuchin Fr. Raniero Cantalamessa, preacher of the papal household, to the U.S. bishops during their Jan. 2-8 retreat at Mundelein Seminary, outside of Chicago, are available at this link. Text of Talk No. 8 is found at the bottom of this page.

Texts of the 11 talks delivered to the U.S. bishops who gathered for a week's retreat at Mundelein Seminary outside of Chicago show a heavy emphasis on traditional themes, a robust defense of celibacy, a severe criticism of attachment to money and an endorsement of new lay movements as a replacement for declining numbers of clerics.

NCR obtained the texts, 84 single-spaced pages, and they can be seen in their entirety here. They were delivered during the Jan. 2-8 retreat by Capuchin Fr. Raniero Cantalamessa, preacher of the papal household.

The talks contain only passing reference to the sex abuse scandal that was the reason behind the unusual retreat, suggested by Pope Francis, and the omission was intentional.

"I am not going to talk about pedophilia or give advice about eventual solutions," Cantalamessa said at the outset. "That is not my task and I would not have the competence to do it. This is a time for taking a break, as the psalmist says 'away from the strife of tongues' (Ps 31:21), and to listen to the voice of the Lord of the Church. I am convinced that this approach is the only way to get to the root issues that the Church is facing, which are both different and deeper than the issues that usually come to mind." In fact, in one brief mention of the scandal, the preacher sees a positive result in the humbling of the church.

Cantalamessa begins with a fairly basic presentation on the need for a personal relationship with Jesus and prayer "as the indispensable means for cultivating a relationship with Jesus." In the talk he draws a distinction between the "'public Jesus who casts out demons, preaches the kingdom, works miracles, and is involved in controversies; and on the other hand, there's the 'private' Jesus who is almost hidden between the lines of the gospel. This latter Jesus is the praying Jesus."

He urged the bishops to "rethink … the relationship between prayer and action" moving "beyond juxtaposition to  subordination [italics in original]. Juxtaposition is when we pray first, and then we act. Subordination, on the other hand, is when we pray first and then do what emerges from our prayer!" He said the apostles and saints "prayed in order to know what to do," not just before doing something.

Cantalamessa mentions the scandal for the first time in the second talk and says that while the clergy sex abuse scandals "rightly" overwhelm the church "we fail to see how much more gospel-like and humble the Church of Christ has become, how more free from worldly power." Indeed, the preacher would term this period the "'golden age' compared to past centuries when many bishops were more concerned about governing their territory than caring for the flock. In the past, to be a bishop was an honor; today it is a burden."

In the same talk he emphasized the importance of the relationship between bishops and priests, urging bishops to spend time with priests "even at the expense of other engagements."

In a later talk, he said he believed he was inspired to do a reflection on the agony of Jesus in the Garden of Gethsemane "because, due to the scandals of pedophilia, many bishops in the Catholic church, starting with the Bishop of Rome, are experiencing right now exactly what Jesus experienced in Gethsemane. As we have seen, the ultimate cause of his suffering in the Garden of Olives consisted in taking upon himself sins that he had not committed himself and in bearing responsibility for them in front of the Father. There is a redemptive and expiatory power in doing this."

In the third talk, "To Be With Christ Means to Share His Celibacy for the Kingdom," Cantalamessa equates celibacy with "a more radical way of sharing in his mission" that Jesus revealed to his disciples. "For Catholic clergy," he said, "this is no longer an option but an integral part of our vocation." At the same time, he said, "Whether because of all the fuss surrounding it, or the thought that perhaps one day — who knows? — church law might change, celibacy today is not experienced with a sense of serenity." 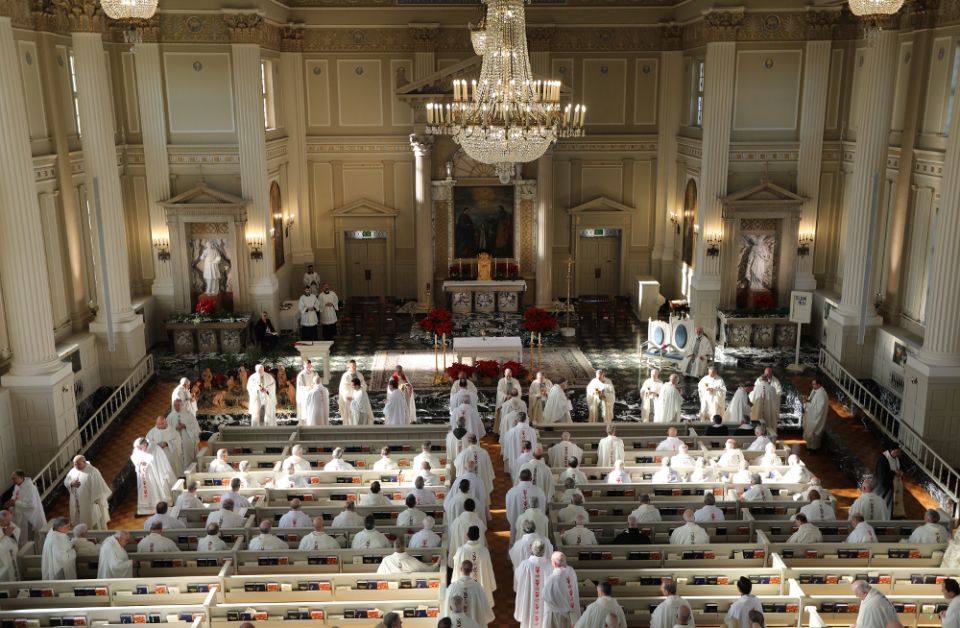 U.S. bishops receive Communion during Mass in the Chapel of the Immaculate Conception at Mundelein Seminary Jan. 3 at the University of St. Mary of the Lake in Illinois, near Chicago. (CNS/Bob Roller)

Celibacy, he said, will always "be part of Christ's design." Even if mandatory celibacy is abolished, he said, "celibacy itself, that is, the possibility of choosing to follow Jesus in this radical and beautiful way, can never be eradicated." He labeled as false "the claim that celibacy as a state of life is contrary to nature and hinders people from fully being themselves. He claims that such a view, expounded by "founders of modern psychology, was based on a materialistic and atheistic view of the human being."

He revisited debates of the past about whether virginity-celibacy constituted a "more 'perfect' state than marriage. I believe that celibacy is not ontologically more perfect: each state of life is perfect for the person who is called to it. Virginity-celibacy is, however, eschatologically more advanced in the sense that it more clearly approximates the definitive state toward which we are all journeying. Saint Cyprian, a married bishop, wrote to the first Christian virgins, 'What we shall be, already you have begun to be.' " [Italics in the original.]

Throughout history, he writes, "the proclamation of the gospel and the church's mission have in large part rested on the shoulders" of men and women who have renounced marriage.

And yet he also states: "Since it is not of divine origin, mandatory celibacy for priests can, of course, be changed by the Church, if at a certain point she thought it necessary."

The discussion of celibacy led to discussion of love, carnal and otherwise, and the acknowledgment that priests were attracted "to the other sex" as well as "to someone of the same sex," a "delicate matter" he said he would "completely avoid" because it "requires a pastoral discernment far beyond my competence and the scope of a retreat."

He offered, however, that while some clerics attracted to the same sex believed "they are permitted or at least excused to act out accordingly," the law of celibacy also applied to them.

"The Church is born of hope. If we intend to give new momentum to faith to empower it to conquer the world again in our age, we will need to rekindle hope. Nothing is possible without hope."

Sharing the poverty of Jesus, he said in talk four, doesn't mean giving up all earthy goods. "The Gospel never condemns earthly goods and riches in themselves," he said. "What Christ condemns is attachment to money and goods, trusting in them as if 'one's life depended on them.' "

For several pages, Cantalamessa uses severe language in condemning such attachment and he has especially harsh words for "the so called 'Prosperity gospel,' " which he termed a "total contradiction to the Gospel of Christ," a gospel that "far from being 'good news to the poor' becomes good news for the rich."

In one of his final talks, Cantalamessa said a contemporary challenge for the church is figuring out how to incorporate the ministry of lay people. "In various parts of the Christian world," he said, "the Parable of the Lost Sheep is being lived out in reverse: ninety-nine sheep have gone away and only one has remained in the sheepfold. The danger is that we spend all of our time nourishing the one remaining sheep and, due to the scarcity of clergy, don't have time to go out in search of the sheep who are lost."

His focus was not on incorporation of ordinary lay people but on "ecclesial movements" which, he said, have been the locus of many conversions "both of nonbelievers and of nominal Christians returning to the practice of the faith."

Ending with a reflection on the Resurrection, he said, "The Church is born of hope. If we intend to give new momentum to faith to empower it to conquer the world again in our age, we will need to rekindle hope. Nothing is possible without hope."

Editor's Note: Talk Number 8, posted below, was missing from those originally posted online on Jan. 11.

Accountability | Pope's preacher goes back to basics in talks to bishops

Listen to the Gospel message and become a disciple