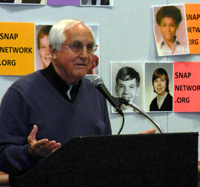 MILWAUKEE -- Because he violated "communio episcoporum" (the communion of bishops) and other canons by speaking in support of extending the statute of limitations for cases of sexual abuse by clergy, retired Detroit auxiliary bishop Thomas Gumbleton said he was forced to discontinue his role as pastor at a Detroit parish. It was the first time Gumbleton revealed details about his removal as a parish pastor in 2007.

Besides receiving the official notification that he had to resign as pastor, Gumbleton said none of his fellow bishops contacted him personally when he spoke in support of the bill and revealed at the bill's hearing that he was a survivor of sexual abuse by a priest.

Gumbleton spoke Nov. 4 at a session given by the Survivors Network for those Abused by Priests at the Call to Action national conference in Milwaukee.

During the session, he related what he said happened to him after he spoke in January 2006 in support of extending the statute of limitations for sexual abuse civil lawsuits in Ohio.

Talking to conference attendees about the graveness of sexual abuse and the attitude toward it, he said he hopes his story "might encourage some of you to be more active to work to end this, what even the Pope has called a cancer in the Catholic church, and to bring about healing for the survivors first of all and healing for our own church," he said.

In 2006, he gave a written testimony to the Ohio House Judiciary Committee that explained his support for a bill that would extend the statute of limitations to 20 years past the victim's 18th birthday. In that testimony, he also said a priest sexually abused him in the 9th and 10th grades.

The Ohio Catholic Conference and bishops had spoken out against the bill. They opposed one part of the bill, which would give a one-year look-back period that allowed people to come forward with allegations that had ran past the statute of limitations.

By speaking in support of a bill that the Ohio bishops spoke against, Gumbleton had violated "communio episcoporum," Gumbleton said. He was notified of that violation in a letter from the Vatican sent to the then-Detroit Archbishop Adam Maida, which was then given to Gumbleton.

A direct consequence of this violation, Gumbleton said, was that he was forced to give up his position as pastor at St. Leo Parish in Detroit, where he had been since 1983.

After he had given his testimony, revealing he was abused and voicing his support for the bill, no bishop personally called him, he said.

At that time, Gumbleton had been a bishop for more than 30 years.

“I know all these [bishops],” he said. “I've met with them many times. … Not one of them called me up to talk to me about it. Now, if they were angry, they could call me up and holler at me and scream at me if they wanted. Or they could have asked, 'Why did you do it?'"

Within 10 days, Gumbleton said he received a call from Maida, now a cardinal, saying the Vatican had contacted the Papal Nuncio, who had then contacted Maida about Gumbleton.

"They reacted against it very publicly," Gumbleton said.

The letter given to Maida and then to Gumbleton outlined the canons of canon law that Gumbleton had violated, Gumbleton said. The main thing, he said, was that he had broken "communio episcoporum." The letter demanded that he resign immediately as bishop and resign as pastor of the parish, he said.

Gumbleton turned 75 in January 2005, the year before the Ohio hearing, but did not send in his letter of resignation to the Vatican, as most bishops do at that age.

Instead, he wrote to the Congregation for Bishops asking that he be allowed to serve as long as he was healthy. The congregation deemed the request unacceptable, and after a year of correspondence with the congregation, Gumbleton submitted his resignation “from the office of auxiliary bishop to Cardinal [Adam] Maida” on Jan. 21, 2006, 10 days after his testimony in Ohio.

Gumbleton, widely known as an advocate for the poor and for pacifist causes, has a weekly column of his homilies on the NCR website.


Editor's Note: This story is part of NCR's coverage of the Call to Action conference this weekend. Check back at NCRonline.org for more over the coming days.

Nashville deacon removed from ministry for speaking out about sex abuse