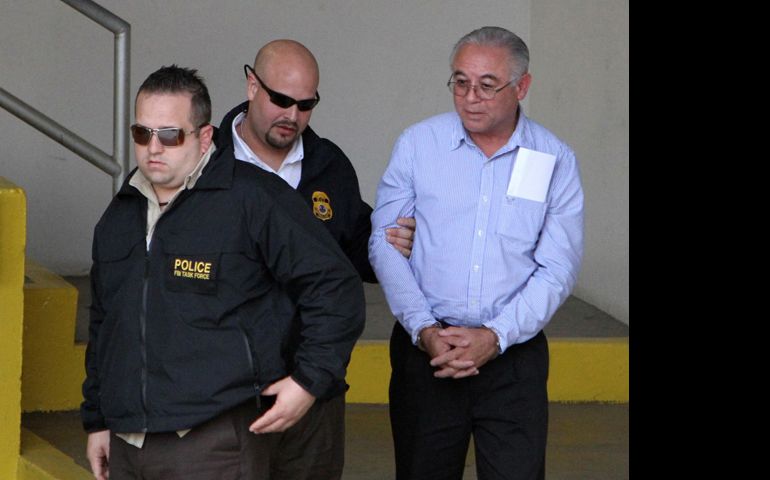 Agents with the FBI and the U.S. Immigration and Customs Enforcement arrest Fr. Israel Berrios on Tuesday in Guaynabo, Puerto Rico. (CNS/Reuters)

San Juan, Puerto Rico — A suspended priest of the diocese of Caguas, Puerto Rico, was arrested Tuesday by federal authorities for allegedly transporting a minor with the intent to engage in criminal sexual activity and sexual trafficking of minors.

Fr. Israel Berrios, 58, was arrested at his home in Naranjito without incident, according to a press release Wednesday by U.S. Immigration and Customs Enforcement's Homeland Security Investigations unit, which conducted the investigation.

The Associated Press reported that Berrios has been accused of sexually abusing an altar boy from the time he was about 8 until he turned 17, according to Puerto Rico Justice Secretary Cesar Miranda.

If found guilty, he could face at least 10 years in prison, and as much as a life sentence if convicted on all charges.

In a statement Wednesday released to Catholic News Service in Washington, Bishop Ruben Gonzalez Medina of Caguas called the abuse of a minor "unjustifiable, intolerable, reprehensible" and a criminal act that "cannot, in any way, go unpunished."

He asked for forgiveness "especially from the youth involved" and his family and from "all those who in one way or another have been affected by the actions that led to the arrest and imprisonment" of Berrios. He urged others who may be victims of abuse to come forward.

Gonzalez said he suspended Berrios last year when the allegations first surfaced and followed the protocols established by the Puerto Rican Episcopal Conference. He said the Caguas diocese has fully cooperated with the criminal investigation and the case "has been elevated to Rome" to begin the process for Berrios' laicization by the Vatican.

The bishop urged Catholics to pray that "justice and mercy can heal the deep wounds" of "this painful situation."

Until his suspension, Berrios was pastor of St. Andrew the Apostle Parish in Barranquitas. He also served as a diocesan consultor, a member of the priests' senate, and was on the diocese's vocations team.

According to the ICE indictment, from 2007 through 2008, Berrios allegedly transported the minor to his Naranjito home in an automobile owned by the San Jose Parish in Aibonito to engage in a commercial sex act.

The indictment further alleges that in July 2008, Berrios transported the minor to Miami, where together they took a four-day cruise to the Bahamas for the purposes of engaging in a commercial sex act.

The minor in question is now a 21-year-old university student, according to AP.

The investigation is part of Operation Predator, an international initiative to protect children from sexual predators. Since its launch in 2003, more than 10,000 people have been arrested for crimes against children, including the production and distribution of online child pornography, traveling overseas for sex with minors, and sex trafficking of children. In fiscal year 2013, more than 2,000 individuals were arrested under this initiative.

Prosecutors have already charged one of six former priests from the diocese of Arecibo with committing lewd acts. Edwin Antonio Mercado was scheduled to appear in court in late May.

The Puerto Rico Supreme Court agreed to hear a case involving the Arecibo diocese and the Puerto Rico Department of Justice's effort to obtain confidential documents related to the probe. Diocesan officials argue they have already provided sufficient information and seek to protect the identity of those who made the allegations.

Reactions to new church abuse laws: a good step, but more are needed