After divorce, thereís still a pewful of love 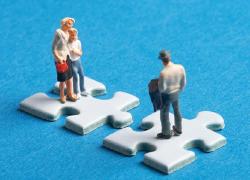 When I got to church last Sunday, the two grandchildren I expected to see were already there. Tom, 11, is always easy to spot because of his bright red, curly hair. He wore his cream-color altar robe and waited with the two other servers for the entrance procession. Blonde Barbara, 6, was busy filling baskets with cans of vegetables and boxed foods. The children of the church would carry the baskets in the offertory procession. It was the first Sunday of the month, time to replenish the church’s food pantry.

Our deacon greeted me and said Tom had told him his other grandma was there. I found a seat near the front with Donna, the children’s mom, and her mom, the Barbara for whom young Barbara was named. Donna’s sister, Diane, and her little ones, Ian and Mirabelle, joined us. We had a pewful -- lots of friendly eyes to watch the family’s new server.

When Tom’s dad came, also named Tom, he sat behind us. Young Barbara happily moved between her mom and dad during Mass.

Tom and Donna have been divorced for a year. They share the children. Tom has them Wednesdays for supper and every other weekend. The parents seem to work out with good grace whatever time problems crop up.

Our Sundays together in church remain a blessing. I appreciate Tom and Donna for continuing to participate in the church they joined earlier in their 13-year marriage. I know there are sadnesses, disappointments, hurts, scritches and scratches that stir anger and heartache and make each of them want to tear their hair from time to time. But somehow they seem to leave that behind when they come to church.

At the homily, our deacon said he found the readings for the day a challenge for the preacher. They included the reading where Jesus speaks against divorce. The deacon said he had contacted members of the Liturgy Committee and the Leadership Team to ask for guidance, but didn’t mention getting much beyond the comment, “Better you then me.” He said divorce was common in his family of origin, that a favorite aunt had been married five times and was looking to a sixth marriage at the time of her death.

Two of my aunts were divorced and remarried, including one that was helpful to me throughout her life. My parents were divorced, which seemed to me a great disgrace in the small town where I grew up. I, too, was divorced long ago. After a few years of hard feelings, my former husband and I have found each other as friends. One of young Tom and Barbara’s loving grandfathers, he sometimes joins us at church on Sunday.

I think most children would prefer to grow up in a home with two parents who loved them and each other. And despite the fact that we love those darling children, this may not be something we can give.

God knows the history of people attempting to live together and love each other is littered with failed hopes and dreams. But our God is a forgiving God. And a generous God who gives good things to married people, divorced people and single people.

Perhaps the best a grandparent can do is to continue to love our grownup son or daughter and the partner he or she chose, though that relationship has changed. And, of course, to love and care for when we can those darling grandchildren whose every move delights us and speaks to us about how much God loves the world and its people.

At the end of the homily, Barbara, the grandmother, whispered to me, “The deacon should have asked people to pray for those living with divorce.”

After divorce, thereís still a pewful of love