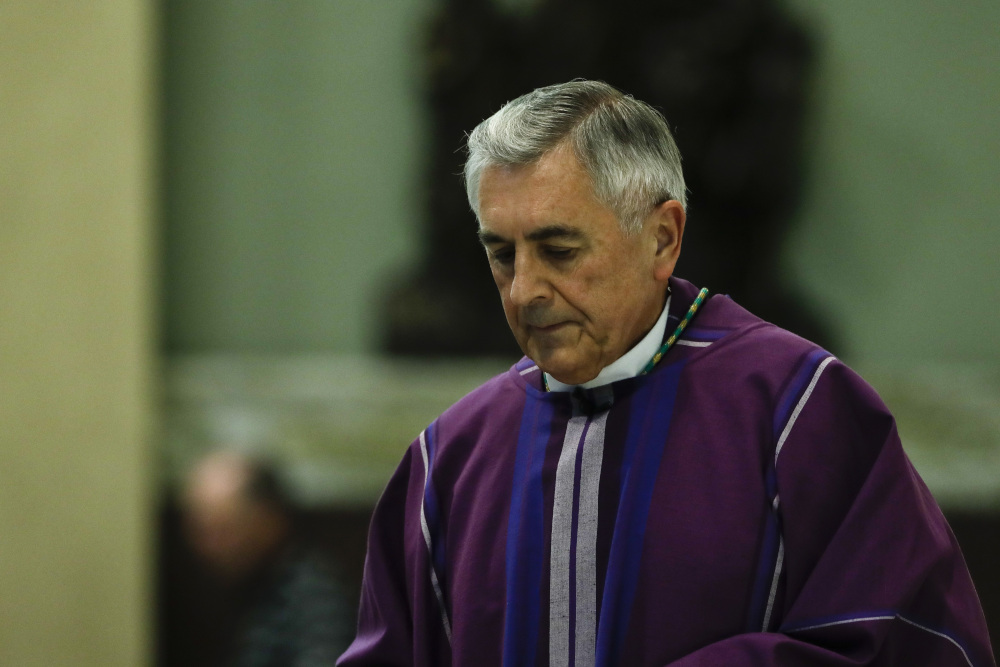 In this Friday, Aug. 17, 2018 file photo, Bishop Ronald Gainer of the Harrisburg Diocese celebrates Mass at the Cathedral Church of Saint Patrick in Harrisburg, Pennsylvania. On wednesday, Feb. 19, 2020, the Diocese of Harrisburg filed for bankruptcy, six months after disclosing it had paid millions of dollars to people sexually abused as children by its clerics. (AP/Matt Rourke)

The Roman Catholic Diocese of Harrisburg, Pennsylvania, filed for bankruptcy Feb.19, six months after disclosing it had paid millions of dollars to people sexually abused as children by its clerics.

The diocese joins at least 20 others across the United States in seeking protection from creditors through the federal bankruptcy system, but it is the first diocese in Pennsylvania to take such a step.

In August, the diocese said it paid 106 people a total of just over $12 million to compensate for claims of sexual abuse they suffered as children from its clerics, deacons and seminarians. Six others did not accept payment offers from the diocese.

The filing in Harrisburg federal bankruptcy court said the diocese "faces potentially significant exposure from remaining claimants" and wants Chapter 11 reorganization to provide money for unresolved claims and perform its ministry and other operations.

The diocese told the court it has more than 200 creditors and estimated liabilities between $50 million and $100 million, with assets of less than $10 million. It listed creditors that include a $30 million loan from the Pennsylvania Economic Development Financing Authority and 12 blacked-out names that were represented by lawyers.

The diocese serves about 250,000 Catholics in 89 parishes, spanning 15 counties.

The filing could help shield it from additional claims, said Harrisburg lawyer Ben Andreozzi, who has settled about 20 claims against the diocese and has two pending lawsuits, all related to child sexual abuse.Andreozzi was listed in the court filing as the contact for six creditors.

"From the day they file bankruptcy, moving on into the future, if someone did not present their claim in that time frame, it is forever exhausted," Andreozzi said.

The Harrisburg diocese opened a temporary settlement program after a landmark grand jury report accused it and five other dioceses in Pennsylvania of covering up the sexual abuse of hundreds of children over much of the past century.

Many of those now-adult victims identified in the grand jury report are too old, under state law, to sue the dioceses.

The state Legislature last year took a crucial step toward amending the state constitution to give those victims a new opportunity to sue their abusers and institutions that may have covered it up.

The proposed amendment allowing such a lawsuit "window" must be passed by lawmakers again in the 2021-22 legislative session before needing approval by voters in a statewide referendum.

Lawmakers, however, have rejected changing state law to allow such lawsuits, as several other states have done.

Andreozzi said the diocese can resolve lawsuits at a much lower cost by going into bankruptcy before Pennsylvania opens a window for lawsuits.

A claim that goes to a jury in state court is typically worth several times as much in a cash settlement for a victim who sues, Andreozzi said.

Minneapolis attorney Jeff Anderson, who represents dozens of clergy abuse survivors in lawsuits against the Roman Catholic dioceses, said filing for bankruptcy can be used to hide assets or shield them during the determination of their liability to victims.

Filing for bankruptcy can also help dioceses avoid being forced under court order to divulge documents or testimony about how they handled reports of abuse in the past, Anderson added.

A handful of bishops had sought Vatican approval to file for bankruptcy protection prior to the early 2000s when abuse allegations in Boston brought the clergy child sexual abuse scandal into sharp focus, but none had ever followed through.

Facing several legal claims over alleged abuse, including one lawsuit seeking $130 million, the Archdiocese of Portland in Oregon was the first to file for bankruptcy protection in 2004. The archdiocese reached a $75 million settlement to address the abuse claims as part of that proceeding.

Twenty-two U.S. dioceses and religious orders, including one in Guam, have filed for bankruptcy protection, according to the group BishopAccountability.org. One, Minnesota's Diocese of St. Cloud, had announced bankruptcy plans but has continued negotiating with accusers to stave itoff.

All of the Catholic dioceses and religious orders that filed for bankruptcy in the United States are still in existence and carrying out their mission, said Marie Reilly, a Penn State University law professor.

[Associated Press writers Marc Levy in Harrisburg and Claudia Lauer in Philadelphia contributed to this report.]