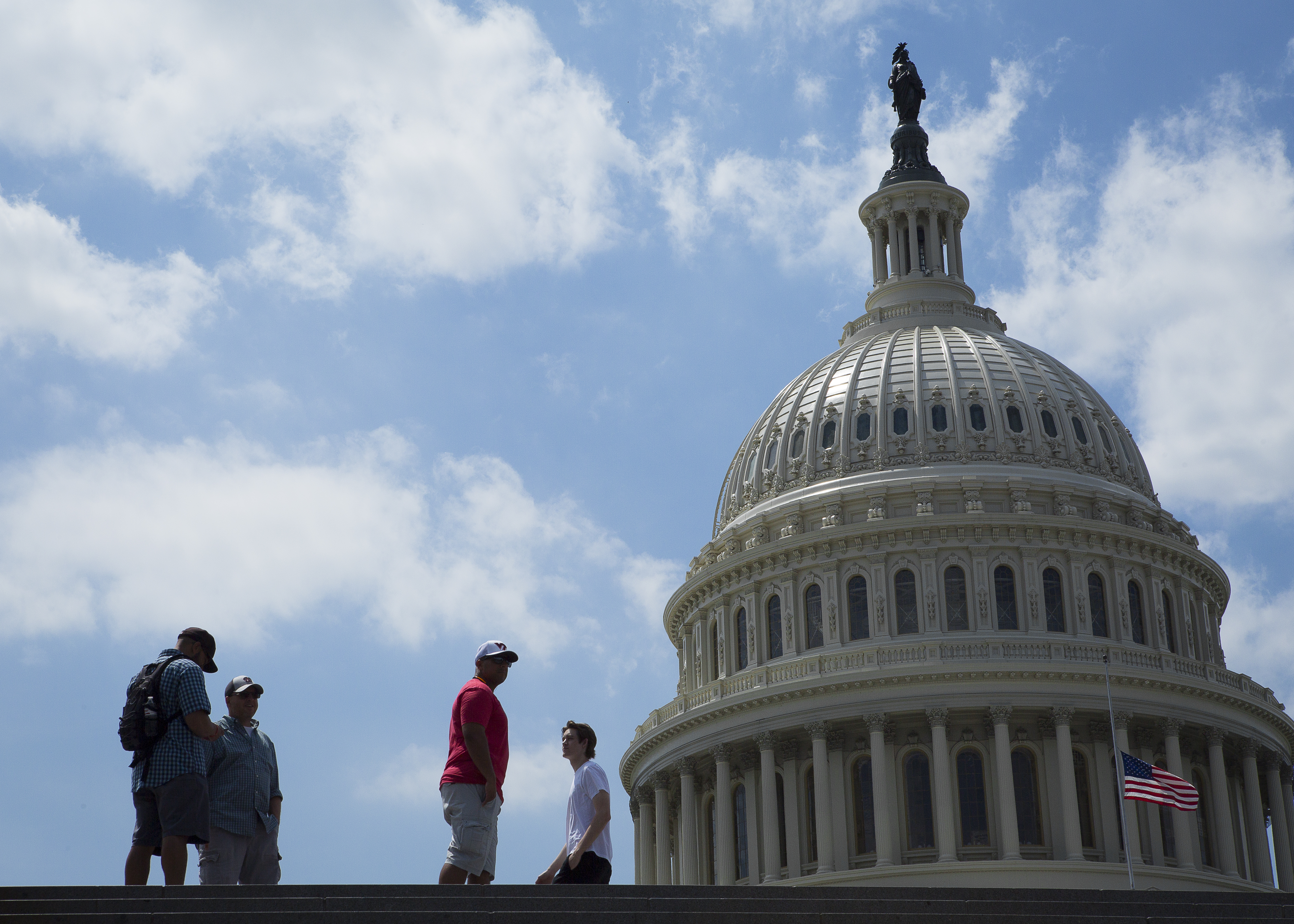 People are seen near the U.S. Capitol in Washington May 21. (CNS/Tyler Orsburn)

Vasquez said the bill would bring about "large structural changes to the immigration system that detrimentally impact families and the vulnerable." He said the new bill, still without a name or number, "contains several provisions that run contrary to our Catholic social teaching."

He made the comments in a letter dated June 18 and sent to each member of the House. It was posted June 19 on the U.S. bishops' website justiceforimmigrants.org.

Vasquez said this unnamed bill would "undermine asylum protections by significantly raising the hurdle applicants face during the 'credible fear' review, lead to increases in child and family detention … eliminate protection for unaccompanied minors through the proposed changes to the Trafficking Victims Protection Reauthorization Act, includes part of the DACA (Deferred Action on Childhood Arrivals)-eligible population but does not include same population eligible in the USA Act and the DREAM Act, make sweeping cuts to family-based immigration and unilaterally implement a safe third country agreement without a bilateral or multilateral treaty or agreement."

Nor would the bill "end the practice of separating families at the U.S.-Mexico border, he added. "Instead, this bill would increase the number of children and families in detention, which is not acceptable." Vasquez reminded House members the Trump administration can end its family separation policy, without the need for legislation, at its own discretion.

Vasquez added, "We believe that any such legislation must be bipartisan, provide Dreamers with a path to citizenship, be pro-family, protect the vulnerable and be respectful of human dignity with regard to border security and enforcement."

The Uniting and Securing America Act (USA) Act, which he referenced in the letter, would protect Dreamers and strengthens border security. The DREAM (Development, Relief, and Education for Alien Minors) Act, which he also mentioned, primarily would offer a path to citizenship for DACA recipients and other Dreamers.

In the letter, Vasquez reminded House members the Trump administration can end its family separation policy without the need for legislation through its own discretion, and that an immigration bill could secure the U.S. border and ensure humane treatment to immigrant families through alternative policies.

Given the newness of the bill, "we ask for timely consideration of our concerns," Vasquez said, "particularly the cuts to family-based immigration, as well as the harmful changes to the asylum system and existing protections for unaccompanied children. Without such changes to these measures, we would be compelled to oppose it."

House Speaker Paul Ryan, R-Wisconsin, has pledged to bring both the new bill and H.R. 4760, the Securing America's Future Act, to the House floor for votes. Vasquez, in January, wrote to the House opposing H.R. 4760. In the June 18 letter, he said, "we respectfully urge you to reject" it.