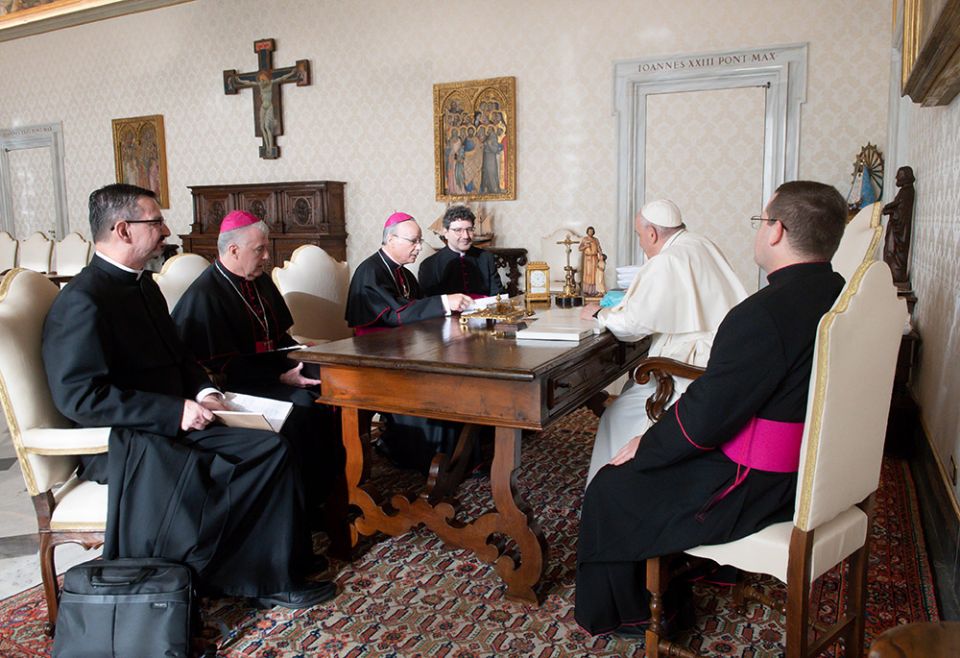 Pope Francis is pictured with officers of the Canadian bishops' conference during a meeting Dec. 9, 2021, at the Vatican. Among those pictured are Bishop William McGrattan of Calgary, Alberta, vice president of the conference, and Bishop Raymond Poisson of Saint-Jérôme and of Mont-Laurier, Quebec, president. (CNS/Vatican Media)

Toronto — More than two dozen Indigenous delegates, accompanied by a handful of Canadian bishops, plan to meet with Pope Francis the last week of March.

The trip to Rome, originally scheduled Dec. 17-20, was derailed by rocketing COVID-19 numbers, which were a particular threat to elderly residential school survivors, who will play a central role in meetings with the pope.

Though March 28-April 1 dates are firm enough to be announced, "the health and safety of all delegates remain our first priority," said a joint statement from the Canadian Conference of Catholic Bishops and the three Indigenous organizations that will send representatives to meet with the pope: the Assembly of First Nations, Métis National Council and Inuit Tapiriit Kanatami. The organizers said they would monitor COVID-19 conditions in Canada and Rome, consult with public health officials and travel "only when we feel it is safe to do so."

"We remain committed to walking toward healing and reconciliation and very much look forward to the opportunity for Indigenous elders, knowledge keepers, residential school survivors and youth to meet with Pope Francis," said the joint release.

Canadian bishops have acknowledged "grave abuses" perpetuated by the 20th-century residential school system, noting it "led to the suppression of Indigenous languages, culture and spirituality" and failed "to respect the rich history, traditions and wisdom of Indigenous peoples." Many of the government schools were run by Catholic religious orders or dioceses. 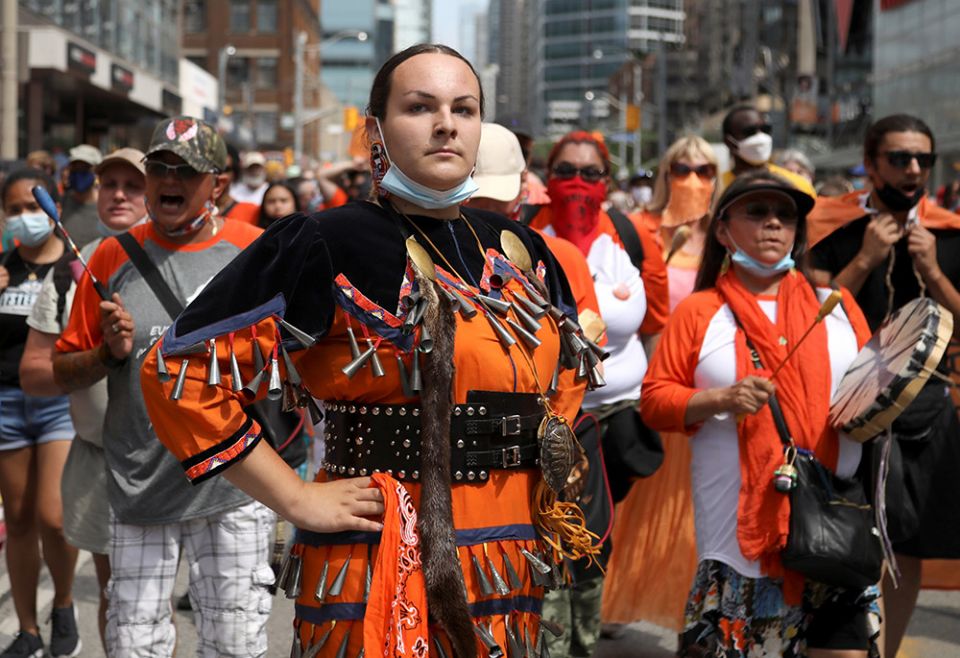 Indigenous performer Danielle Migwans attends a march on Canada Day in Toronto July 1, 2021, after the discovery of hundreds of unmarked graves on the grounds of two former residential schools for Indigenous children in Canada. (CNS/Reuters/Carlos Osorio)

Representatives of the Metis National Council and Assembly of First Nations confirmed to The Catholic Register that they planned to send the same delegations scheduled for December. Before the pandemic delay, the official delegates were to be accompanied by additional Indigenous people, mental health and spiritual support teams and a number of bishops and CCCB support staff.

At least five bishops were scheduled to represent the Canadian Conference of Catholic Bishops, but their role was to listen to the Indigenous delegates, not to direct the encounters with the pope, Archbishop Richard Smith of Edmonton, Alberta, said last fall. 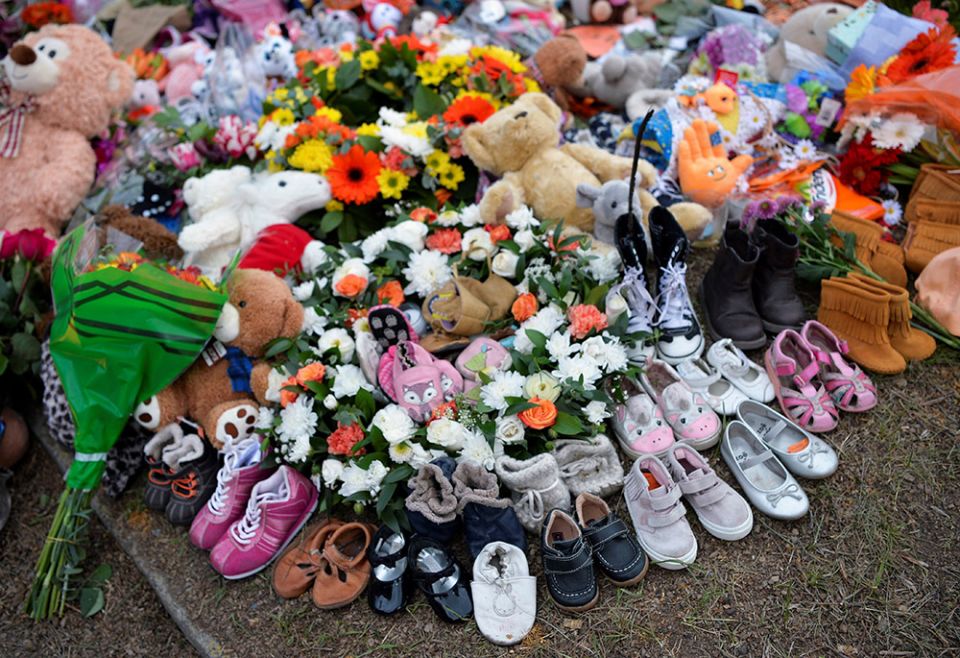 Children's shoes line a memorial on the grounds of the former Kamloops Indian Residential School June 6, 2021. More than two dozen Indigenous delegates, accompanied by a handful of Canadian bishops, plan to meet with Pope Francis at the Vatican March 28-April 1, and the residential school system is expected to figure prominently in discussions. (CNS/Reuters/Jennifer Gauthier)

Delegate meetings with Pope Francis are intended as a first step, leading to a papal visit to Canada. In October, the Vatican press office said Pope Francis is willing to travel to Canada as part of "the long-standing pastoral process of reconciliation with Indigenous peoples," but such a visit has not been scheduled.

In 2015, Canada's Truth and Reconciliation Commission — which created a historical record of the residential schools system — called upon the pope to visit Canada and make a formal apology to Indigenous survivors, their families and communities for the abuse suffered in Catholic-run residential schools.

The residential schools have long been at the heart of discussions and reconciliation efforts between Indigenous Canadians and the Catholic Church. The issue gained urgency in late May when the Tk'emlúps te Secwépemc First Nation reported that, with the use of ground-penetrating radar, an estimated 215 bodies had been found in unmarked graves at the site of the former Kamloops Indian Residential School, run by a Catholic religious order until 1969. Similar discoveries followed at the sites of other residential schools.