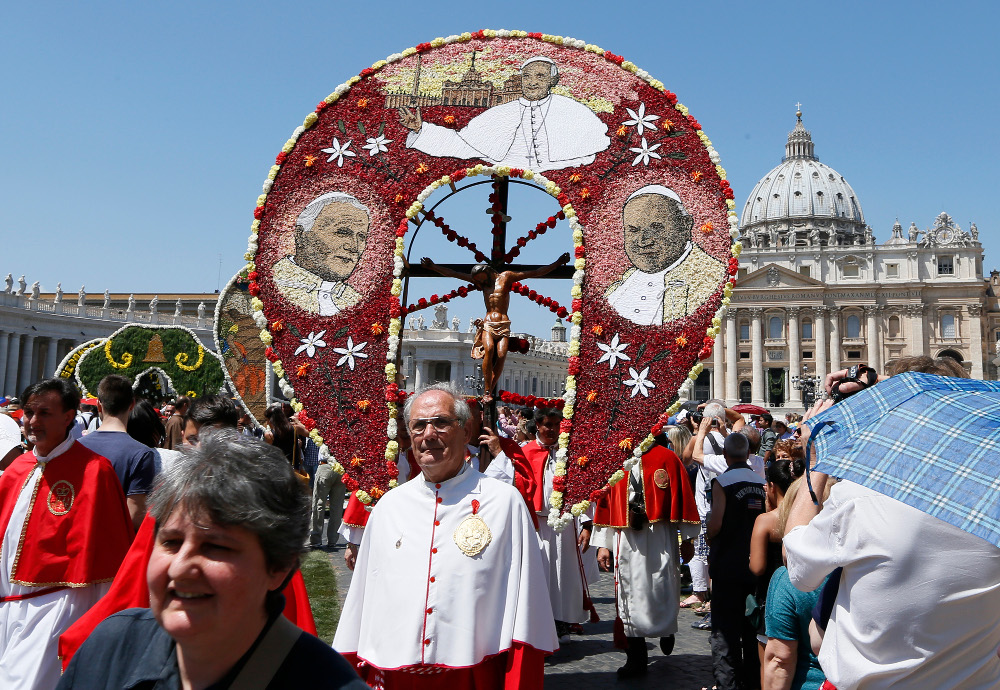 A floral banner featuring Popes John Paul II, Francis and John XXIII is carried outside St. Peter's Square prior to Pope Francis' recitation of the Angelus at the Vatican June 29, 2014. (CNS/Paul Haring) 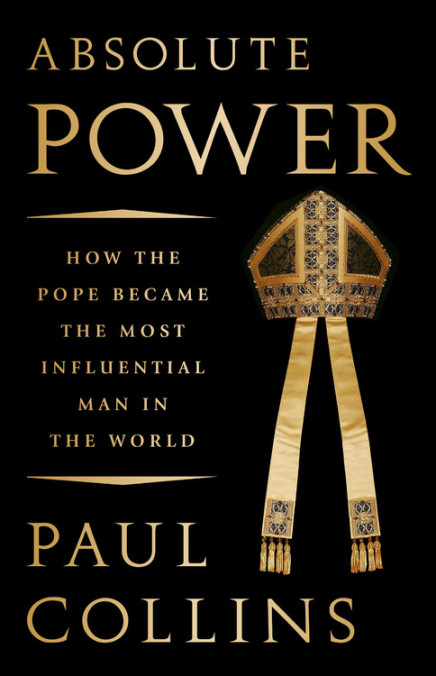 ABSOLUTE POWER: HOW THE POPE BECAME THE MOST INFLUENTIAL MAN IN THE WORLD
Paul Collins
384 pages; Published by Public Affairs
$28.00

Paul Collins' latest book returns to the twin topics of the power of the papacy and the need for structural change in the church that exercised him in his two previous books, Papal Power: A Proposal for Change in Catholicism's Third Millennium (1997) and Upon This Rock: The Popes and Their Changing Role (2000). With the election of Pope Francis, Collins evidently thinks that the time is right for a fairly trenchant review of two centuries of the papacy and that the papacy of Francis is illuminated by the historical discussion.

The first of these two tasks he performs in workmanlike fashion, though there is little if any new information and the thesis that the papacy went from weakness to strength is not especially enlightening.

The second objective seems to me much more questionable. In the first instance, and while one can never confidently accuse an author of responsibility for the title of the book (often a decision made by marketing professionals), Absolute Power: How the Pope Became the Most Influential Man in the World is distinctly misleading. The pope who became the most influential man in the world and raised the papacy to the apogee of global influence was by Collins' own judgment the first Polish pope, John Paul II. If the book had ended with the death of John Paul, the thesis behind the title would make more sense.

Pope Benedict XVI and Francis are not papal afterthoughts, far from it, but they do seem extraneous to the argument. Benedict was a poor leader who had the good sense to see it and retire. And Francis has a wholly different notion of how power should be exercised. Given his profound moral challenge to every aspect of neoliberalism, he certainly ought to be the most influential man in the world, but "absolute power" is not what he is about.

Another and perhaps more productive way to think about Collins' book is that it is written retrospectively. From the perspective of the current papacy, the 12 chapters then become a long historical sigh of relief that things have worked out for the better, if not for the best.

The early chapters on the tenures of Popes Pius VI and Pius VII, Leo XII and Pius VIII will be news to many non-specialist readers and they make Collins' case that the papacy at this time was weak and, frankly, lucky to survive the French Revolution and the Napoleonic era.

From that point on, the story is a familiar one. Pope Gregory XVI thought railroads were the work of the devil, Pope Pius IX went from liberal to conservative, convoked the First Vatican Council, became infallible and spent his last years as the prisoner of the Vatican. Pope Leo XIII began a movement toward modernization, scuttled by Pope Pius X, who for all his enthusiasm for frequent Communion gets here a thoroughly bad (and well-deserved) rap for the scandal of the modernist witch-hunt. 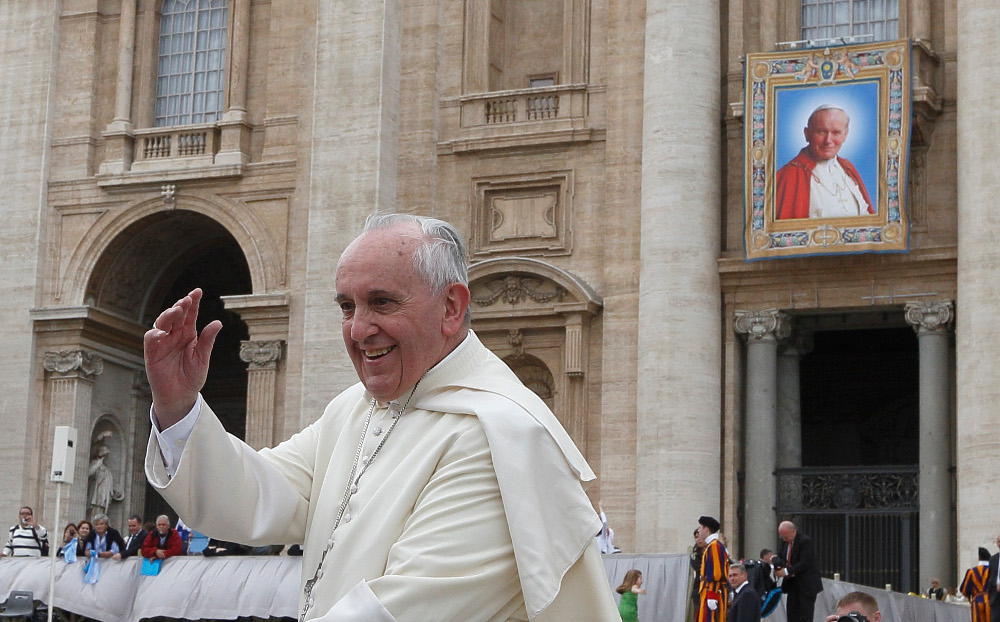 The banner of St. John Paul II hangs from the facade of St. Peter's Basilica as Pope Francis leaves his general audience in St. Peter's Square at the Vatican April 30, 2014. (CNS/Paul Haring)

Pope Benedict XV is a good guy, Pope Pius XI another good guy, but they were both still thinking very hierarchically. Pope Pius XII was highly autocratic but wrote well on Scripture studies and Christology, only to ruin it with a return to anti-modernism in Humani Generis. His 1950 letter attacked significant theologians like Henri de Lubac, Yves Congar and Marie-Dominique Chenu, people whom Pope John XXIII brought back into the fold just in time for the Second Vatican Council. John XXIII "was, without a doubt, by far the most important pope of the twentieth century and probably the most important since the Reformation."

Pope Paul VI was an intelligent and talented neurotic, while John Paul II "certainly embodied 'the fullness of supreme power.' "

Benedict XVI was shy and uncomfortable as pope, and entirely (if surprisingly) uninterested in curial reform, which explains in part why Jorge Mario Bergoglio became Francis. On matters of power and influence, "he has decisively changed the pattern established by his predecessors."

To be fair to Collins, his retrospective reading of the last two centuries of the papacy does not conclude with a judgment that we have now reached the promised land. Francis, he thinks, has pointed the church in the right direction, and if we share his vision, then we have to "trust the Holy Spirit — and keep our fingers crossed!"

His estimate of Francis so far is fair if unoriginal. In particular, he praises him for his approach to the Rome Synod of Bishops on the family and to the apostolic exhortation he wrote afterward. He loves "Laudato Si', on Care for Our Common Home," reserves judgment on curial reform and is skeptical of Francis' blindness on issues of gender and of the roles of women in ministry. All of these positions are fair enough and well-argued, but seem to add little if anything to what has already been said many times before.

So, if Absolute Power breaks very little new ground, can we justify it on the grounds that it speaks to a particular audience?

This book is valuable to those Catholics and non-Catholics who want to make sense of how different things seem to have become.

It is certainly not a book for specialist ecclesiologists or church historians. Nothing new here for them. And it can only arouse dyspepsia among more conservative Catholics who love John Paul II and Benedict, who sit comfortably with the slow but steady movement of Pius IX toward canonization and who are intensely suspicious of Francis' style and substance, even in some cases to the point of accusing him of heresy.

But it is valuable to those Catholics and non-Catholics who want to make sense of how different things seem to have become. While some of the earlier chapters are maybe more detailed than they need to be, and while Collins' personal perspective leads him to focus on some things more than others (modernism, in particular), this is a capable survey of changes in the papacy. It will change no minds about where we currently stand, whether those minds are more progressive or more traditional. It will irritate conservatives, if they read it, and it will for the most part confirm liberals in judgments they have already made.

Perhaps wisely, Collins does not prognosticate about what comes next. His history shows how serendipitous things can be, and often are.

[Paul Lakeland is president of the Catholic Theological Society of America. He teaches at Fairfield University in Connecticut.]

A version of this story appeared in the Sept 7-20, 2018 print issue under the headline: The fortunes of papal power.