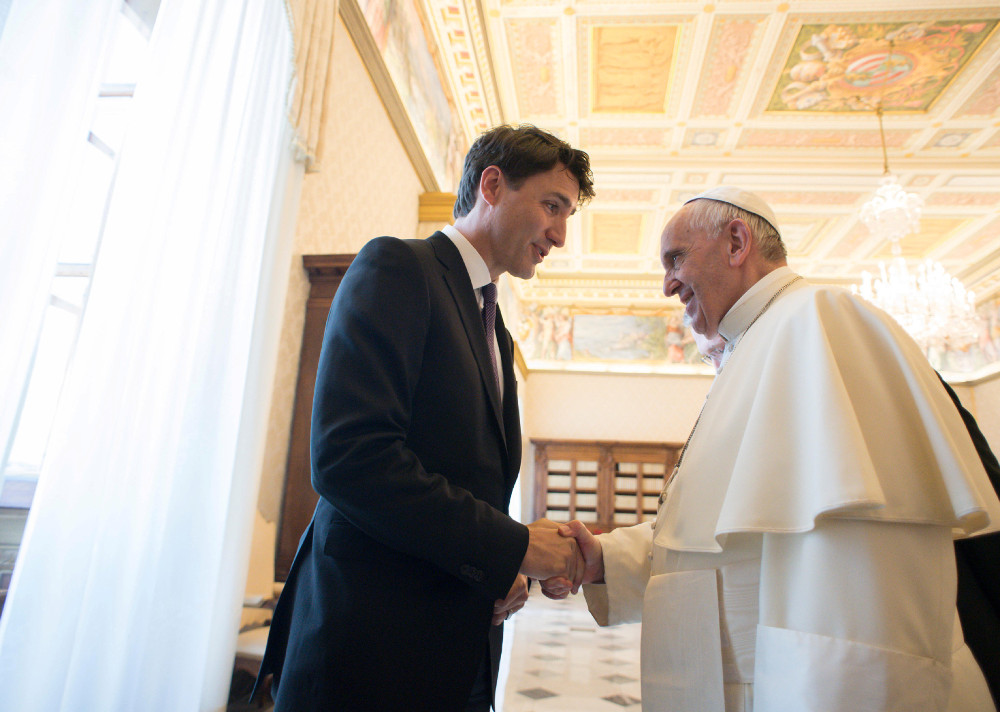 Pope Francis meets Canadian Prime Minister Justin Trudeau during a private audience in 2017 at the Vatican. (CNS/L'Osservatore Romano via Reuters)

Pope Francis will not be visiting Canada to personally apologize for the suffering endured by indigenous Canadians at residential schools, said the president of the Canadian Conference of Catholic Bishops.

A personal apology from the pope, delivered on Canadian soil, was one of 94 "Calls to Action" that came out of a five-year Truth and Reconciliation Commission review of the legacy of residential schools in 2015.

In a March 27 letter to the indigenous peoples of Canada, Bishop Lionel Gendron, CCCB president, said Pope Francis is not able to travel to Canada for the sole purpose of delivering the apology. "A future papal visit to Canada may be considered," Gendron wrote, "taking into account all circumstances, and including an encounter with the indigenous peoples as a top priority."

"Pope Francis, in fulfilling his mission as universal pastor, has spoken often and passionately about the plight of indigenous peoples around the world and the wisdom they offer, not shying away from acknowledging those injustices that have failed to conform to the Gospel and expressing regret for past wrongs," Gendron wrote. "He has pointed to indigenous peoples as critical dialogue partners to whom the church needs to listen."

The bishop also said Pope Francis was aware of the recommendation in the Calls to Action but, "after carefully considering the request and extensive dialogue with the bishops of Canada, he (Pope Francis) felt that he could not personally respond," wrote Gendron, the bishop of Saint-Jean-Longueil, Quebec.

While the idea behind the schools was to promote the greater integration of indigenous communities into modern Canadian life, the schools — many run by Catholic religious orders — led to a situation in which many children were torn from their families, lost their native language and cultures and often suffered abuse.

Gendron stressed that reconciliation with Canada's original inhabitants remains "a major pastoral priority" for Canada's bishops and the church from coast to coast.

"We look forward to a future where systemic injustices are meaningfully addressed, where we all discover new ways of living together through which the First Peoples of this land are honored and respected," he wrote.

In a May 2017 meeting at the Vatican, Prime Minister Justin Trudeau asked Pope Francis to visit Canada to issue the apology, as requested by the Truth and Reconciliation Commission. The bishops of Saskatchewan issued a similar invitation last December, asking the pope to make an apology on Canadian soil.

To the surprise of some, the question of a papal visit to Canada was not on the official agenda when Canadian bishops held their annual plenary in Cornwall, Ontario, Sept. 25-29.

Bishop Douglas Crosby of Hamilton, Ontario, then-outgoing CCCB president, said the matter had to be considered carefully "because it can be really expensive."

"That's why there is a lot of discussion with government and with other agencies," said Crosby.

When Gendron became president of the CCCB in October, he said the bishops were in a process of discernment regarding a papal visit.

In his March 27 letter, Gendron emphasized local and personal efforts to forge a new relationship between the church and indigenous Canadians.

"We have heard your invitation to engage honestly and courageously with the past, to acknowledge the failings of members of the Catholic Church, and to take active steps of solidarity with indigenous peoples toward a better future," he wrote. "... We wish to dedicate ourselves with you to reconciliation at the local level through concrete pastoral initiatives."

Indigenous issues are expected to be at the forefront of a 2019 Synod of Bishops in Rome on the environmental and cultural destiny of the Amazon basin. The CCCB has designated a young, non-Catholic Cree man, Jacob Jason Genaille-Dustyhorn, as a youth delegate to the October synod on young people.

Genaille-Dustyhorn was in Rome March 19-24 to contribute to a pre-synod meeting of young adults with Pope Francis and Vatican officials.

Swan is associate editor of The Catholic Register, Toronto.