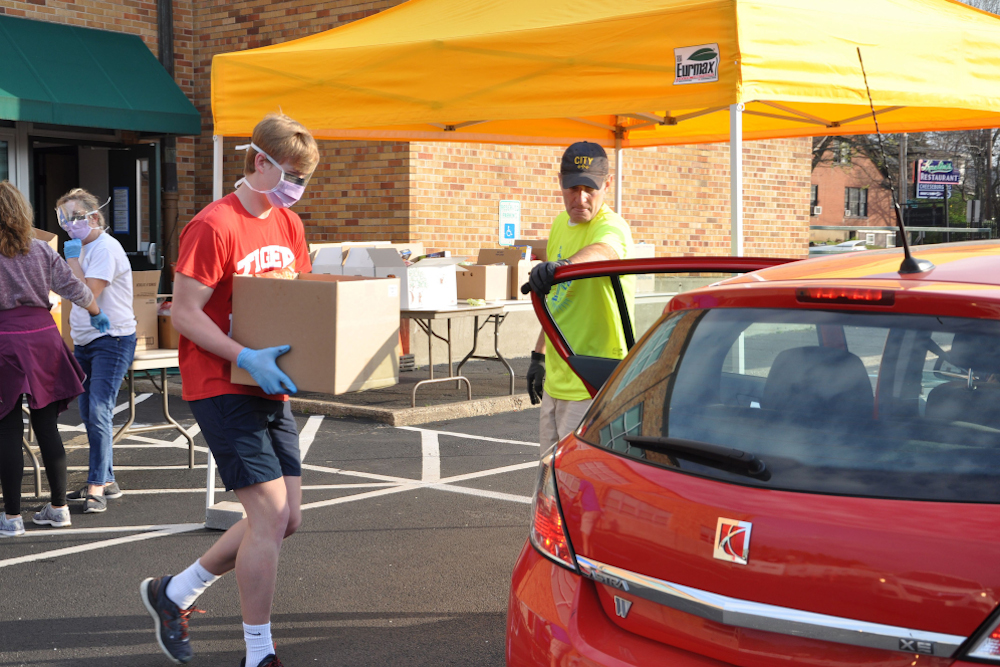 Feeding the hungry — one of the Works of Mercy described by Jesus in Matthew 25 — unfolds every day in the outreach of Catholic Charities of the Archdiocese of Washington.

But with the coronavirus outbreak and the resulting financial crisis impacting many individuals and families, the agency has seen a dramatic growth in the need for providing food to those in need in the nation's capital and in surrounding Maryland counties.

As an example, he noted, "I was working three weeks ago at the Spanish Catholic Center's food pantry in Washington, D.C., and we saw 54 families. This was just before the stay-at-home order (for D.C. residents)."

On April 8 at that food pantry, Lewis said they served 200 families and expected to distribute another 200 food packages the following day — which amounts to a nearly eight-fold increase in less than a month.

On Holy Thursday, April 9, Catholic Charities held a Virtual Food Drive to encourage Catholics to make online financial donations to help the agency meet the growth in the need for food assistance. 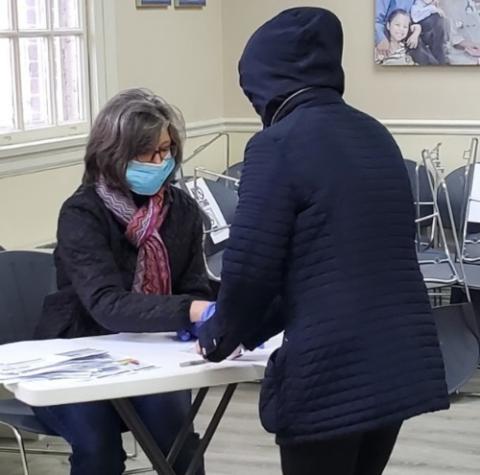 For the agency, which is on the front lines of the fight against hunger in the Washington region all year round, the Virtual Food Drive, "is really important," Lewis told the Catholic Standard, Washington's archdiocesan newspaper. Without it, "we wouldn't have funding to support all this extra purchasing we needed to do and all the food distributions," he said.

In 2019, Catholic Charities provided more than 2.5 million meals to those in need and distributed more than 1 million pounds of food to local pantries.

As of April 9, 10% of the U.S. labor force was out of work because the pandemic has forced the closure in most states of all but the most essential businesses for weeks on end. As a result, food banks and pantries are seeing what some have described as a "tsunami" of people in need.

Across the Potomac River from Washington, in the Diocese of Arlington, Virginia, on a recent cold, rainy morning, a line of cars started at the back of St. Anthony of Padua Church in Falls Church, hugged the outline of the parking lot and stopped at the entrance. Those on foot formed a shorter line parallel to the cars.

Volunteers wearing face masks and gloves worked under tents, putting dried beans, canned fruit and other goods into grocery bags. They urged recipients to stay in the cars as they themselves loaded car trunks with food. Those walking were asked to quickly grab the prepared bags lined up on the table.

Other volunteers loaded boxes of pears and apples into metal trailers on the property. In the middle of the food distribution, the line of cars halted as a huge Capital Area Food Bank truck unloaded its wares.

St. Anthony parishioners hold a food distribution every Monday and Wednesday morning, serving an average of 120 families per day, about 1,000 per month. But that number has jumped since the coronavirus pandemic began.

"At the present time, we are having three or four times (that many people come)," said Ubaldo Cisneros, parish social ministry coordinator. "Last Wednesday, we served 522 families with every family taking between 30 and 40 pounds (of food)."

"Requests for food at Catholic Charities St. Lucy Food Project pantries are at an all-time high," Catherine Hassinger, director of community services, told the Arlington Catholic Herald, the diocesan newspaper. "At our Leesburg Regional Office, requests doubled from 45 households in an average week to more than 80. At Christ House, usually we help about 53 households in two days. (Recently,) we helped 124 households, representing 370 people, in two days."

Cisneros said that "all of the people who come to pick up food mention being affected by the coronavirus. Many (are) unemployed, many (have) fewer hours. People are terrified because they do not see how they are going to pay their rent and bills."

Food pantries all over the area are seeing increased demand due to coronavirus-related business closures, and are asking for more food for their clients.

"Our pantries are becoming inundated with requests for food and this demand is expected to increase the longer people are out of work and funds begin to become scarce," he said. Their volunteers are no longer making home visits, but are still checking their helpline and aiding where they can."

In the Archdiocese of Louisville, Kentucky, about 150 families rely on St. Agnes Church's Dare to Care Food Pantry to supplement their nutritional needs each month.

Because of the coronavirus pandemic, organizers recently turned the farmers-market-style food pantry into a drive-through to help protect volunteers and guests.

Meg Schuler, a St. Agnes parishioner and one of the pantry's organizers, said she was "excited" the parish was still able to offer the pantry and "grateful" people were still willing to volunteer.

"I had a lot of people email me asking if they could still come and help. It was heartwarming in this time when no one knows what to do but still wants to help," Schuler told The Record, Louisville's archdiocesan newspaper, in a phone interview.

Guests were asked to remain in their cars and form a line in the parking lot between the school and church. Volunteers had their temperatures checked upon arrival, wore gloves and masks and respected the 6-foot social distancing guideline.

"It's been really neat to see the community rally and come up with creative ways to address the situation," Siegwald told The Record.

Dare to Care has close to 250 distribution partners, including St. Agnes, in the area and only 13 have had to close due to the coronavirus, he said. By late March, Dare to Care food sites had already seen about a 15% to 20% increase in need.

In an April 8 news release, Catholic Charities Brooklyn and Queens, New York, in the Diocese of Brooklyn, said it has seen a 50% increase in the need for hot meals to be delivered to isolated seniors. On average, the agency distributes 5,000 meals, but as a result of the coronavirus outbreak, Catholic Charities is delivering 8,000 meals weekly.

Food pantry distributions also have increased. On average, the agency said it distributes 83,000 meals per month within its food pantry network. During the week of March 30, Catholic Charities saw a 20% increase across its 20 parish-based food pantries.

The agency hosted a pop-up food distribution event April 8 in Corona in Queens, a community that has been severely impacted by COVID-19.

The grab-and-go style event served 750 families and individuals with bags of food to feed a family of three for three days. The bags included an array of fresh fruits and vegetables, beverages and nonperishable goods.

On April 7 the Knights of Columbus, based in New Haven, Connecticut, announced it is launching a multimillion-dollar food drive and delivery operation to support the nation's food banks.

The fraternal organization also said it plans to mobilize its 1.25 million members in the U.S. to help in over 20 cities in 16 states and the District of Columbia.

A version of this story appeared in the May 15-28, 2020 print issue under the headline: Catholic Charities is on front lines.