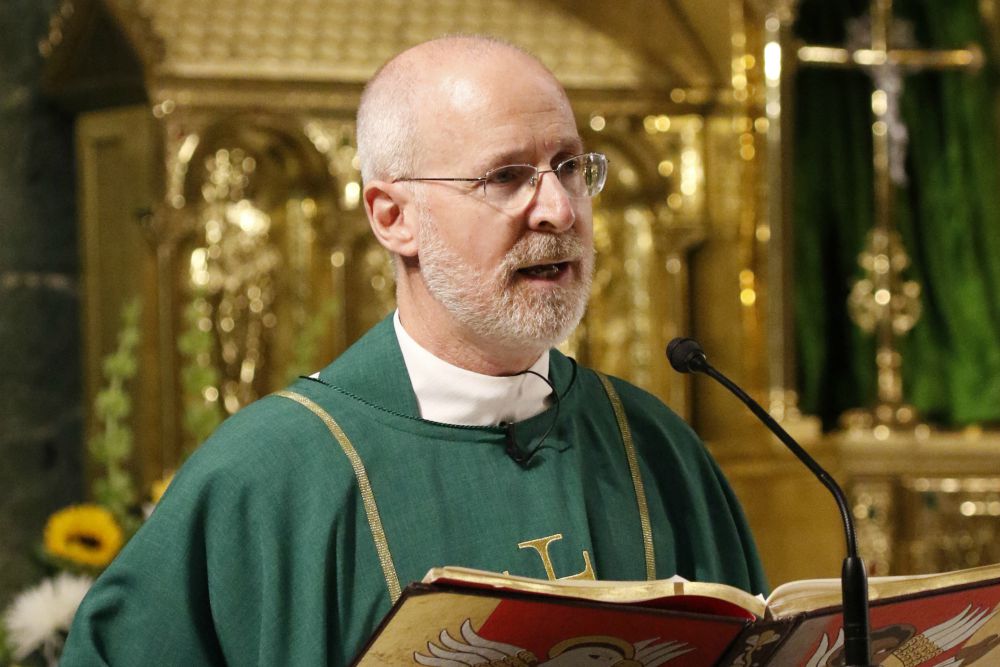 Pope Francis met Sept. 30 with Jesuit Fr. James Martin, an editor at America magazine who has become known for his ministry to LGBT Catholics in the U.S. and his support of advocacy groups such as New Ways Ministry.

The meeting, which took place in the Vatican's apostolic palace and lasted about a half hour, was announced by the Vatican press office on the pope's daily schedule, released each day at noon in Rome.

In a tweet following the papal encounter, Martin called it "one of the highlights" of his life and said it was "a clear sign of [Francis'] deep pastoral care for LGBT Catholics and LGBT people worldwide."

An accompanying Vatican photo showed Martin and Francis sitting together at the pope's desk, smiling at one another.

Francis meets with individual priests, bishops and members of religious orders on a daily basis, but only some of those encounters are publicly announced. Usually the Vatican only announces the meetings the pope is holding in an official capacity, such as with world leaders or heads of religious orders.

Martin's ministry to LGBT Catholics has sparked severe criticism online and from some U.S. bishops. Last week, for example, Philadelphia Archbishop Charles Chaput criticized what he alleged was a "pattern of ambiguity" in Martin's work.

Martin responded that he has clearly enunciated the Catholic Church's teachings on same-sex relationships.

Martin is the author of the book Building a Bridge: How the Catholic Church and the LGBT Community Can Enter into a Relationship of Respect, Compassion, and Sensitivity, which was based on a lecture he gave when he received an award from New Ways Ministry in 2016.

The group, which was co-founded by Loretto Sr. Jeannine Gramick, said in a statement that Martin's meeting with Francis "refutes the unjustified barrage of criticism he has received from a minority of church leaders and other anti-LGBTQ sectors of the church."

"It is a clear signal that Pope Francis is calling the church to conversion away from the negative messages it has sent in the past about LGBTQ people," said the statement. "It is a day of celebration for LGBTQ Catholics who have longed for an outstretched hand of welcome from the church that they love."

Martin is a consultor to the Vatican's Dicastery for Communication and has been in Rome for the office's annual plenary assembly, held last week.

Francis' meeting with the Jesuit comes just days after the revelation of the pope's unusual interaction with another priest engaged in ministry towards LGBT Catholics.

In an article in the British Catholic newsweekly The Tablet Sept. 26, English theologian James Alison said he had received a supportive phone call from Francis about two years ago.

Alison had been a Dominican priest but was dismissed from the order after expressing disagreement over the church's prohibition of same-sex sexual relationships. He said he had also been involuntarily laicized when a bishop in Brazil, where he was ministering, pursued the matter with the Vatican's Congregation for Clergy.

Alison said he had passed along a note to Francis to appeal his laicization through another bishop in 2017. He said he then received an unexpected phone call a few months later.

"I want you to walk with deep interior freedom, following the Spirit of Jesus," Alison recounted as the pope's words. Alison added that the pope said he would give Alison "the power of the keys," in an apparent reference to the papal prerogative to overturn decisions of the Vatican congregations.

A version of this story appeared in the Oct 18-31, 2019 print issue under the headline: Catholic LGBT advocates praise pope's meeting with Martin.