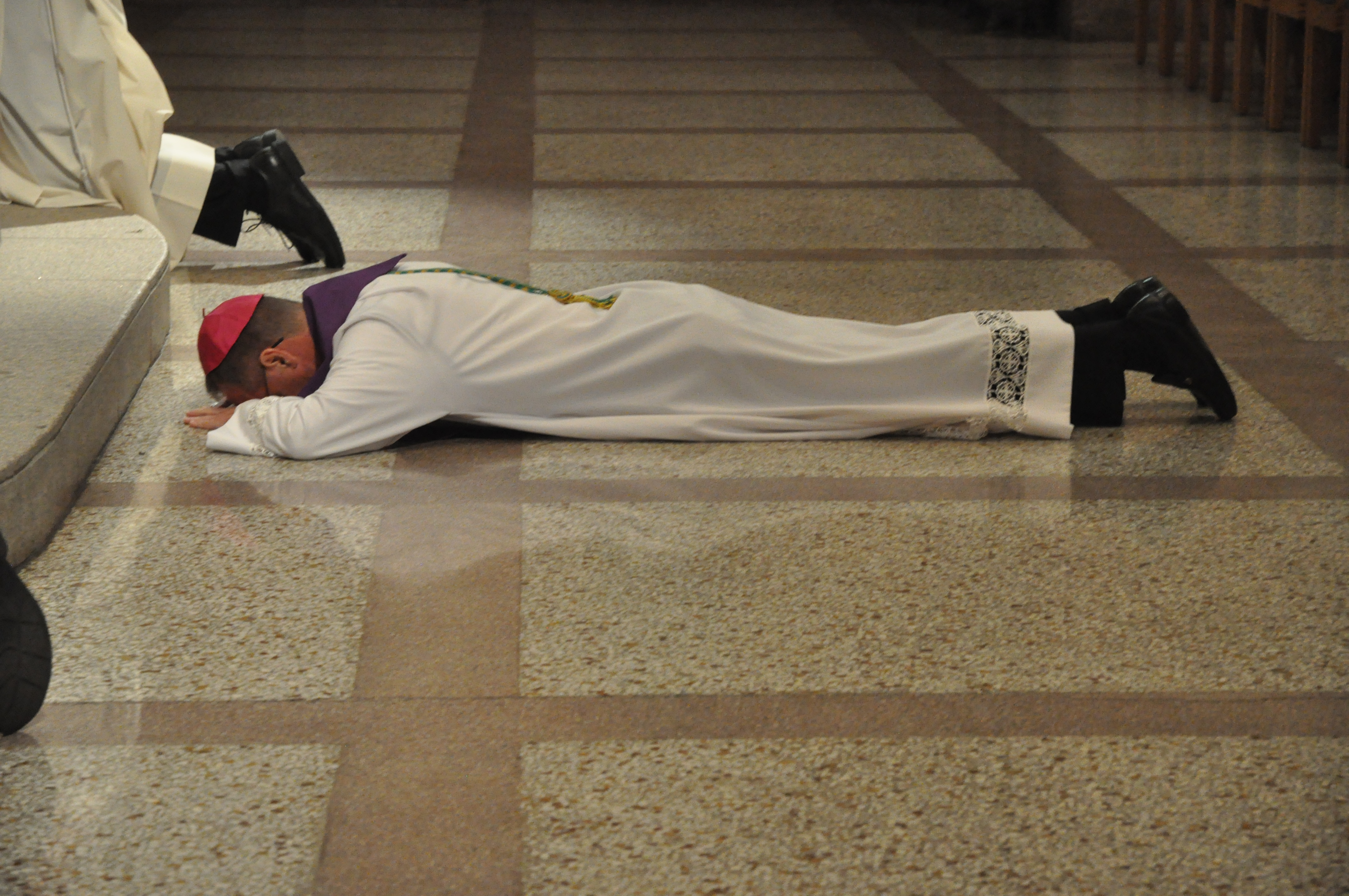 Archbishop Charles Thompson of Indianapolis lays prostrate on the floor of SS. Peter and Paul Cathedral in Indianapolis Sept. 15 during a "Holy Hour for Prayer, Penance and Healing" for victims of sexual abuse. (CNS/The Criterion/Sean Gallagher)

Several hundred participants gathered at the Cathedral Basilica of SS. Peter and Paul Sept. 14 for a prayer vigil organized by the Archdiocese of Philadelphia in response to the ongoing clerical sexual abuse crisis.

The seven-hour event, titled "Have Mercy on Us, O Lord," centered on both communal and private prayer during an evening of eucharistic adoration. Fr. Dennis Gill, director of the archdiocesan Office for Divine Worship, presided over the vigil, which began at 5 p.m. and ended with benediction at midnight.

The sacrament of reconciliation was available throughout the service, which was designed as "a prayer vigil of reparation and petition," according to Gill.

"The members of the church, the body of Christ, are in real pain from sexual abuse, the failure of leadership and the sense of betrayal," he said. "We need healing. Many things are required for this healing, and one of those things is for Catholics to come together and pray."

In a statement to local media, archdiocesan spokesman Kenneth Gavin said that "as a Catholic faith community, prayer and a personal relationship with Jesus Christ is central to all that we do."

At the same time, he added, prayer is "only one aspect" of the archdiocesan response to the "societal scourge of child abuse."

Four counselors from the archdiocese's Office for Child and Youth Protection were on hand from 7 to 8 p.m., along with two additional counselors.

Terence Sweeney and Jessica Ferro, both of St. Francis de Sales Parish in West Philadelphia, said the vigil offered a constructive outlet for their grief and outrage.

"It gives us the opportunity to come together and to actually bring things to the Lord instead of just dwelling on them," said Ferro, who serves as the program and communications coordinator for the Collegium Institute, a Catholic intellectual foundation based at the University of Pennsylvania.

Sweeney added the gathering should serve as a model for similar services throughout the archdiocese.

"The cathedral is the place where leadership is supposed to radiate out," he said. "I think our parishes should host these vigils too."

Several seminarians in attendance expressed their support for all those affected by clerical abuse.

The vigil drew one protester who stood facing the cathedral's front doors with a poster of a young man's face and declined to speak with CatholicPhilly.com, the news outlet of the Archdiocese of Philadelphia.

Phong Le, a seminarian who stayed until the conclusion of the vigil, said that the evening had imbued him with a sense of the Lord's presence.

"I have a feeling of hope that God will purify our church," said Le.

Gill stressed that the vigil was ultimately an expression of confidence in Christ.

"This prayer is not a camouflage to distract from the evil and sin that surround us," he said. "Jesus is with us through all of this. He will not fail us, and we cannot fail him."

A similar service was held Sept. 15 at SS. Peter and Paul Cathedral in Indianapolis called a "Holy Hour for Prayer, Penance and Healing."

Archbishop Charles Thompson laid prostrate in prayer on the floor for several minutes on at the start of the service. During his homily, he said this was "an act of penance and a pledge of doing everything in my power to do what is right, just and holy in eradicating the great scourge of sexual abuse and sexual harassment of all persons, most especially children and young people, making every effort to prevent it from happening again."

The Holy Hour, which was attended by approximately 175 people, took place on the Memorial of Our Lady of Sorrows, which recalls the suffering that Mary experienced at the foot of the cross in witnessing the crucifixion.

One of the participants was Christen Havard, 24, a member of St. John the Evangelist Parish in Indianapolis. She said the seeing the archbishop laying prostrate in penance and prayer was very powerful and that prayer, sacrifice and penance was needed as the church moves forward.

The archbishop said the service was "merely an initial step in the long road of recovery and it must begin with my deepest apologies for the atrocious sins of abuse, neglect and omission by those who have been entrusted with the mission of caring, loving, respecting, protecting, defending, honoring and healing."

He also emphasized the need for action.

"The U.S. bishops are being called upon to provide more independent reporting of concerns involving bishops themselves and greater lay involvement in the process of oversight among other things," he said. "I am confident that these will be put in place."

After the Holy Hour, Benedictine Sister Nicolette Etienne said she felt very emotional about the crisis in part because she is the sister of Archbishop Paul Etienne of Anchorage, Alaska, who was ordained a priest for the Indianapolis Archdiocese, and two priests of the Evansville Diocese.

"I know that they've worked really hard to help bring people closer to the heart of God and I know the pain they're experiencing right now," she said.

Her concern extended beyond her family to the rest of the church and especially the victims of abuse.

Like Etienne, Fr. Jude Sahayam has also been challenged emotionally by the clergy abuse crisis. Because of that, his first inclination was to stay away from the holy hour.

"I didn't want to go," said the priest, who is associate pastor of St. Christopher Parish in Indianapolis. "It was hard. But I said, 'I have to be there,' both for the victims and for the priests who abused. That's how we become one body. Sexual abuse really puts us apart from another. But the Blessed Sacrament brings us together."