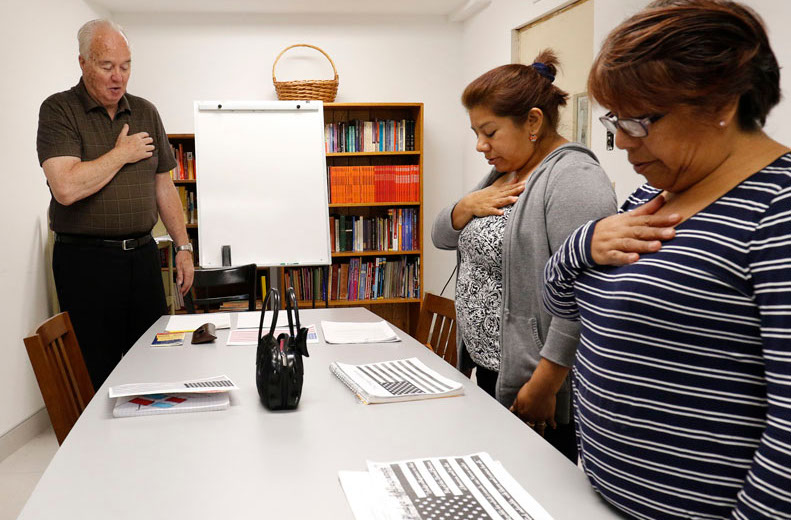 Volunteer instructor Jack Carroll and students recite the pledge of allegiance in October 2016 during a class at St. Luke Church in Brentwood, New York, for immigrants who are preparing to apply for U.S. citizenship. (CNS/Gregory A. Shemitz)

The U.S. Census may not be at the top of a typical list of social justice issues, but it is a "stealth issue" crucial to apportionment for everything from seats in the House of Representatives to federal funding for safety net and disaster relief services.

That's why a number of Catholic and other religious organizations are opposing a proposal by the Department of Justice to add a question about citizenship to the 2020 short-form survey. Critics argue the move could have a "chilling" effect on immigrants with or without documentation, and could result in a "failed census" with inaccurate and incomplete data.

A question about citizenship is unnecessary — since the census measures citizens and noncitizens alike — and would be costly, argues a Jan. 10 letter from the Leadership Conference on Civil and Human Rights, which represents 200 organizations.

"In addition, adding this question would jeopardize the accuracy of the 2020 Census in every state and every community by deterring many people from responding," said the letter. "The question is unnecessarily intrusive and will raise concerns in all households — native- and foreign-born, citizens and non-citizens — about the confidentiality of information provided to the government and how that information might be used."

Anti-immigrant sentiment since the 2016 election has already led to heightened fear in immigrant communities, which concerns Catholic social justice advocates.

"To add a citizenship question to the census short form will exacerbate some very real fears and lead to faulty census results," said Lawrence Couch, director of the National Advocacy Center of the Sisters of the Good Shepherd. "Here again, the vulnerable will suffer since they most likely will be under-counted. As Catholics, our faith calls us to action [and] to the public square to speak for those whose voices are not being heard."

The Sisters of the Good Shepherd were one of several Catholic groups among 168 signers of the letter to Commerce Secretary Wilbur Ross, urging him to reject the justice department's request to add the citizenship question.

Other Catholic and religious signers included Franciscan Action Network, Bread for the World, Interfaith Worker Justice and Network, a Catholic social justice lobby, among others.

Immigrants are already an undercounted group in the census, and federal agents knocking on doors with questions about legal status would only exacerbate the problem, said Sinsinawa Dominican Sr. Quincy Howard, a government relations fellow at Network.

"In the current political climate, there are a lot of fearful immigrants, no matter what their status is," Howard said. "There's a real and palpable fear that [the census data] would be used against them."

And the implications of undercounting are serious.

"States and cities that have immigrant populations would receive less funding from the federal government to provide critical human services," said Howard. "Also, [those] states are going to have potentially less representation in Congress and less voice."

Although data about immigrants' experiences have been collected as part of what used to be called the "long-form" survey (now administered by the American Community Survey to 1 percent of Americans), the short form, which goes to all Americans, has not included a question about citizen status since the enactment of the Voting Rights Act in 1965.

Franciscan Action Network signed the letter because of the potential for unfair representation, which would fall under their "Faithful Democracy" work on money and politics.

The concern is that political parties will attempt to win, not based on the issues, but by limiting who can vote, said Patrick Carolan, executive director of Franciscan Action Network.

"That's not democracy," he said. "As Catholics, if we believe in Catholic social teachings, we have to believe in protecting our democracy."

Network has already been lobbying about lack of funding for the census, which is rapidly approaching and constitutionally mandated to occur every 10 years. "This is the largest, most complex peacetime activity that our federal government undertakes," said Howard. "It's now or never, do or die."

Already, the funding for the census has been "woefully inadequate," she said. In addition, the department has been without a director since former director John Thompson stepped down in June.

Adding the citizenship question would cost money and time, in essence "throwing a monkey wrench into the process in the 11th hour," Howard said. "It doesn't make sense on a procedural level."

Nor does it make moral sense. "As Catholics, we believe that every person inherently has value in God's eye, and the census is the epitome of giving people recognition as a person," she said. "We believe that everyone who lives here should be included. And from the perspective of funding, it's very important that people who live in this country are able to get their very basic needs met."

Instead, the proposal to question immigrants about their citizen status through the census is, in effect, "a continuation of a war on immigrants and refugees," said Ian Pajer-Rogers, communications and political director for Interfaith Worker Justice, which also signed the letter.

"If there is a desire to do a full accounting of the undocumented population in the United States, Congress needs to engage in a process of immigration reform that puts people on a pathway to citizenship," said Pajer-Rogers. "That's the way to get an accurate count."

A version of this story appeared in the Feb 9-22, 2018 print issue under the headline: Critics caution against census question on citzenship.