Chittister: One of a kind at Call to Action gathering 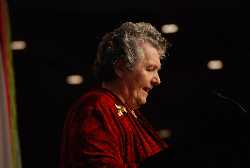 MILWAUKEE -- Benedictine Sr. Joan Chittister sat quietly at a small table Saturday morning sipping coffee in the lobby of the Frontier Airlines Center in Milwaukee where some 2,100 Catholics had gathered for the annual Call to Action weekend national pilgrimage. Call to Action Catholics are progressive misfits and come together because they believe with unyielding determination that at the center of their faith rests the twin pillars of compassion and justice. Yet they don’t find this taught or modeled by the leadership in their church today. What they say they find instead is too much condemnation, feminist exclusion, gay bashing and privilege.

Disappointed that their once youthful Vatican II dreams of renewal of structure have not taken hold as they had hoped they would, they come together to offer each other encouragement and to remind each other that each of them is church, and that they are living and forging church. So this is Call to Action, an organization, a movement, a dream: real Catholics who won't give up and are passing their dreams to the next generations.

As for Chittister, few are able to inspire hurting souls like she can. As a result, she is among the most sought after Catholic speakers on the planet. So it was a coup and a privilege for CTA to have successfully booked her for the Nov. 5-7, 2010 gathering.

I ran into her just after 7:30 a.m. while she was sitting with her fellow Benedictine community member, and assistant for 40 years, Maureen Tobin. Frankly, if it were not for Tobin’s work far fewer people would ever have heard about Chittister, who is the big picture person. Tobin fills in the details, scheduling her good friend’s professional life.

Chittister appeared peaceful enough, though she admitted she was up a lot the night before revising her talk. She said she goes all over the place addressing audiences, but still gets nervous before taking the stage. It sounded almost human-like. “The talk might end up being shoddy,” she told me. “But it will be very fresh shoddy.”

Chittister, of course, is a giant in the Catholic world and beyond, one of the most influential Catholic authors on the planet. Always cordial and gracious and present, she lives with a storm inside, spawned by a keen awareness of suffering and the insatiable desire to confront the causes of that suffering. At the center of this storm is remarkable Benedictine calm, a faith that pain and death and inhumanity don’t get the last word.

Chittister’s understands that hope requires vision and she is quick to remind her audiences that prophets have changed the world. She walks freely through the Old Testament where she finds ageless outraged friends. They fuel her Benedictine soul.

Few writers have their own publishing house. Chittister has Benetvision, run on a shoe string by other dedicated Erie, Pa., Benedictines. As Benetvision tells us, it exists to encourage the development of contemporary spirituality from a feminist and global perspective through Chittister’s writings. Feminist and global, two essential elements in the Chittister vision. While much of the Catholic hierarchy seems to insist on making the meaning of the word “catholic” smaller, Chittister insists on making it far larger. She believes that the entire People of God make up the church, as Vatican II said. Benetvision, meanwhile, keeps the world apace with Chittister’s reflections on the human condition -- with reflections graced by deeply Christian perspectives. Any doubt? Read Benetvision’s latest Chittister offering: God’s Tender Mercy: Reflections on Forgiveness.

At the core, Chittister is a 21st century evangelizer of the Christian faith. Her message and audiences cross generations. This is because she understands the deep spiritual longings of the human family, the changing nature of religions, their failings and possibilities, and the enormous potential contained in human liberation, especially in the historic shifts toward the liberation among women today.

She inspires and countless people want a piece of her time. Suitors sometimes have to schedule her up to three years out. In an uncommon development, the “secular” Stanford University got into line some months back, asking Chittister to deliver a student graduation convocation address in June 2012 -- though it’s still rare for a U.S. bishop to allow her to stand behind a podium on Catholic property.

In the lobby of the Frontier Center (formerly the Midwest Express Center), traffic has picked up as conference attendees began to consider where they needed to be for the first morning sessions. And there was Chittister, still sitting in front of the coffee shop. Walking by, some would notice her, slow down and stare. Others would simply stop in their tracks, causing brief pile ups. Still others would sneak a peek, trying not to be intrusive. They, too, would walk a few more feet and turn their heads, sometimes doing a full body spin -- just to be sure they saw who they thought they saw. For some the sight of Chittister was simply too much. They would stop and dart toward her, bubbling something like: “I just have to say ‘thank you’ for all that you do.”

Then there were the friends, the many friends. People she has known well through the years. They would stop for a greeting and hug. Pretty soon Chittister was popping up and down like a cork in water. The woman has remarkable recall and greeted scores by names. But there are limits to the brightest of minds. Chittister has written in her classic book, The Gift of Years: Growing Older Gracefully that forgetting names as one ages is not the result of some anatomical or neurological disorder. It’s simply that when you are in your 20s you might know 500 people, but when you are in your 60s or 70s, you know some 5,000 -- and the mind has more difficulties tracking those names.

A few hours later, beginning at 11:45 a.m. that Saturday and lasting until 2:00 p.m. CTA schedulers allowed a luncheon break during which conference authors could sign their books. A half dozen authors sat behind tables in the spacious third floor exhibit room. Most had one or two in front of them at any one time. Not Chittister. The line before her table extended 30 feet to 40 feet. Part of the problem was that she insisted on penning a page full of encouraging notes inside each book before signing.

Part of this Benedictine’s art form is the ability to be fully present before each person she meets. She is generous with both time and self, understanding the gift of charisma and how she can use it to further her causes. In other words, she accepts and uses her gifts. This first means being comfortable with herself. It’s never clear how any one person achieves this. In her case, it seems to come out of early childhood, a continued connection with her Irish roots, religious life and close friends within her Erie community.

All of this allows her to better weather the storms within her own church. It seems unbelievable -- and a total waste -- that she is not celebrated in every corner of every parish in America. She would be, of course, were she allowed to speak inside a Catholic church, but she threatens many male clerics, and episcopal dogma today holds that articulate women advocating church justice and inclusive ministries are tearing down church structures -- which, of course, is true. At the same time, the Catholic hierarchy doesn’t quite know what to do about her, it seems. Those that might be reading her quietly probably recognize her, in their most quite moments, as a once in a generation gift. Condemning her or, God forbid the thought, excommunicating her for advocating women’s equality in the church, would almost certainly cause a major Catholic rift beyond most peoples’ imagination. Prophets never make it easy for anyone.

On Sunday morning Chittister was to be the main speaker in the first floor ballroom, a huge room packed with more than 2,000 chairs. The morning session began with a Call to Action Leadership award presentation to Dominican Sister Jamie Phelps, another Catholic giant, and the dean of black Catholic theology in the United States. After 19 centuries Catholic theology has finally put the second leg to the ground, and is becoming more balanced through the works of women theologians. Their insights, however, will take some time to work their ways into official church teachings. People like Phelps and Chittister are relatively early Catholic pioneers in a world that no longer blinks an eye electing women as presidents and heads of state. That’s a huge church problem.

A few minutes after the Phelps presentation, as part of an inter-generational push this year, the youngish Michael Sweitzer-Beckman, NCR columnist and CTA youth activist, was chosen to introduce Chittister. He sheepishly admitted that introducing her at CTA was a bit like introducing John Lennon in Central Park. Within a few minutes Chittister was striding to the podium with a quick gait. If there had been any nervousness, at this point disappeared. She approached the mike and her expectant audience with an impish smile on her face as if to say: “Let’s have some fun.”

Any Chittister talk, no matter the subject, will almost certainly contain large doses of two elements: a presentation of hard reality, including portraits of injustice and suffering; and a gushing blast of hope. Down into the ashes and up again, soaring in faith. This would be no exception. She spoke of pain, prophets, and possibilities.

Following her rousing talk, Chittister left the stage, and was engulfed by freshly inspired friends and other admirers. The audience bolted to their feet. Sustained applause followed for minutes and across the ballroom one could hear a chant growing louder: “Joan for pope; Joan for pope; Joan for pope.” It’s unlikely she heard about the election or would ever accept it. Prophets go a different way.

Editor's Note: For more photos of Joan Chittister at the Call to Action conference see the photo slideshow below. The photos are a mix of those taken by David Gawlik and NCR's marketing manager, Sara Wiercinski.

| Chittister: One of a kind at Call to Action gathering