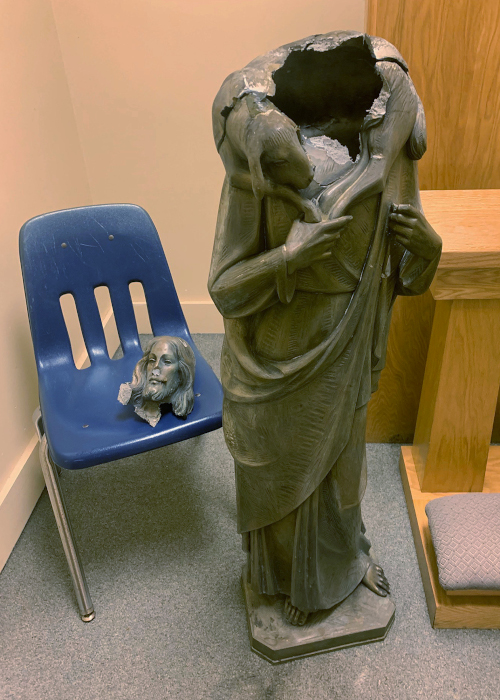 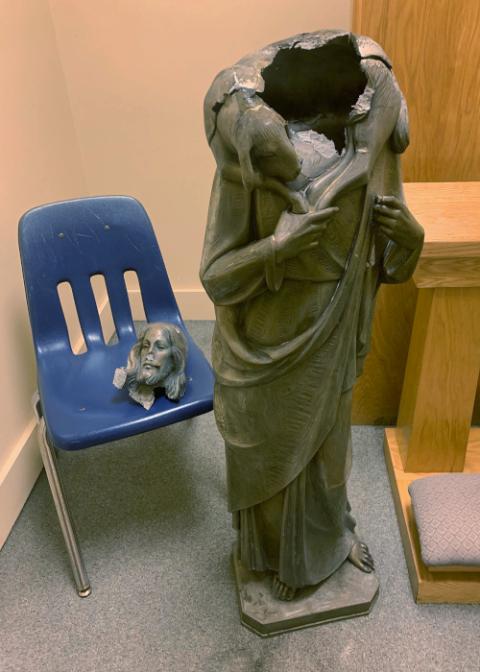 The beheading of a statue of Christ at a Catholic church in the Miami Archdiocese has saddened the parish community of Good Shepherd Church and prompted Miami Archbishop Thomas G. Wenski to call on law enforcement to investigate the incident as a hate crime.

On July 15, the statue at Good Shepherd Catholic Church in Southwest Miami-Dade was found with its head chopped off and knocked from its pedestal.

"It is too soon to arrive to any conclusion, but we have seen other churches vandalized around the country. We totally 'condemn' this action. We invite our community to pray for peace," parish officials said in a statement.

"The statue, located outside the church, was on private and sacred property," said Mary Ross Agosta, director of communications for the Archdiocese of Miami. She told the local Fox News affiliate Wenski requested investigators consider the vandalism "a hate crime."

The Department of Homeland Security is among the agencies investigating the case.

In recent weeks around the country, angry mobs have toppled statues of figures such as St. Junipero Serra, a Franciscan priest from Spain who founded several missions in California. Statues of historical figures, like Christopher Columbus, Gen. Ulysses S. Grant and Frederick Douglass, also have been knocked down and heavily damaged.

A wave of recent attacks on Catholic statues includes an unidentified person using red paint to deface a statue of Mary in front of St. Mary's Cathedral in downtown Colorado Springs, Colorado, July 15.

"It does look like a graffiti tag more than anything else," Fr. David Price, the cathedral's rector, told local reporters. "I'm not sure there was any sense or meaning behind it."

In the Diocese of Knoxville, Tennessee, Fr. Manuel Perez, pastor of St. Stephen Catholic Church in Chattanooga, found a statue of Mary on the parish grounds knocked over and beheaded. News reports said the 5-foot-tall statue was worth $2,000. The missing head has not been found.

As in Florida, the Department of Homeland Security is looking into the incident as a possible hate crime.

"Anytime something like this happens it is disappointing and concerning," said Diocese of Knoxville diocesan spokesman Jim Wogan in a statement. "We don't know if this was the targeted desecration of a sacred statue, or some kind of misguided prank, but it hurts.

"For whatever reason we are living in a very chaotic time and anger seems to be the default setting for people," he added. "Our bishop has asked that we live by the example set in the Gospel of Matthew, to treat others as we ourselves would want to be treated."

Knoxville Bishop Richard F. Stika tweeted about the incident July 13, saying "what a strange time" we live in. "Over the weekend, an outdoor statue of the Blessed Mother was beheaded at St. Stephen Parish in Chattanooga. This is occurring at various spots throughout the United States."

A statue of Mary was found defaced July 10 on the grounds of Cathedral Prep School and Seminary in the Diocese of Brooklyn, New York.

"Obviously, this tragedy saddens us deeply," he said in a statement, "but it also renews our hope and faith in the Lord as he has shown his goodness in the many people who have already reached out to us." He urged prayers "for those who committed this act of vandalism and hatred toward Our Lady and the church."

Police in Boston were likewise investigating a fire that damaged a statue of Mary outside St. Peter Church the evening of July 11. News reports said flowers in Mary's hands were set on fire, causing damage from her arms up to her face.

Fire also claimed much of two Catholic churches, one in Florida and one in California.

In the Diocese of Orlando, Florida, a man crashed his van through the doors of Our Lady Queen of Peace Church in Ocala early in the morning July 11. Once inside, he set the interior of the church ablaze. There were no injuries reported.

Police later apprehended the suspect who had fled the scene, identified as Anthony Steven Shields, 24, who was charged with several felonies, including attempted second-degree murder, arson to a structure and felony fleeing or attempting to elude.

In Los Angeles a fire ravaged Mission San Gabriel Arcangel church in the predawn hours of July 11. Investigators have not yet determined what started the blaze that gutted the 230-year-old church.