Creation care: A return of love for love 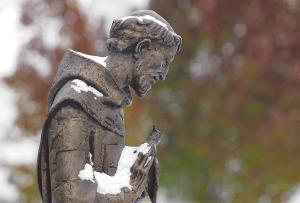 Modern science teaches us about the fundamental interdependence of all life on Earth -- an insight that St. Francis of Assisi grasped centuries ago, and his life and teachings offer Christians a spiritual grounding to help them respond to todays environmental crisis. So argue Franciscan Sr. Ilia Delio, Franciscan Friar Keith Douglass Warner and Pamela Wood in their recently published book Care for Creation: A Franciscan Spirituality of the Earth.

Each of the books four sections presents a facet of the threats to Earths ecosystems, then examines it from the point of view of Franciscan theology, and finally offers spiritual practices that focus on practical, hands-on approaches to reconnecting with the Earth and acting in right relationship.

After examining the issue of Earths declining biodiversity, driven by habitat loss and human exploitation, the authors ask: How can we humans, as one kind of creature, push so many other creatures of God to extinction? Why are we as a species unraveling the integrity of creation? At its deepest root, our ecological crises derive from our belief that humans are somehow above or fundamentally distinct from -- indeed, absolutely superior to -- the rest of creation. This conceit is incompatible with a Franciscan worldview.

The following excerpt from Care for Creation uses St. Francis Canticle of Creation as the basis of a theological reflection on biodiversity and the humans place in it.

The Canticle reminds us that we humans are as dependent on the elements of creation as they are dependent on us. With his marvelous respect for creatures of all kinds, for sun, moon, stars, water, wind, fire and earth, Francis came to see that all creation gives praise to God. Brother Sun and Sister Moon praise God just by being sun and moon. Brother wind and sister stars praise God by being wind and stars. Francis developed a deep sense of universal community because Christ became the center of his very being through the power of love. Love enabled Francis to let go of control and to allow that which exists to be itself, and in that being to realize the radiant goodness of God. Love gives being to being; it gives more being to what is loved so that what is loved can become truly what it is. Such love is the fruit of contemplative union with God but not a union exclusive of God. As we see in the life of Francis, union with God is union with all other beings, whether humans, animals, plants or the elements. There can be no true love of God without true love of all creatures; thus, full union with God must include all creation. Eric Doyle says:

To love is to be in relation with another, creating a bond between the self and a part of the world, and so ultimately between self and all creation. If one person can love one other person, one unique animal, one flower, one special place on this earth, there is no reason in principle why that love cannot stretch out to embrace every single creature to the furthest reaches of space.

There is no doubt that Francis discovered his interrelatedness to the cosmos through compassionate love by which he came to experience a unity of all things in Christ.

Peace is the fruit of love, and Francis lived peacefully in the family of creation. After he had composed the first part of his Canticle, a conflict arose between the bishop and mayor of Assisi. Although Francis was ill, he was moved to help the situation and intervened by composing a verse of praises, included in the Canticle: Praised be You, my Lord, through those who give pardon for Your love, and bear infirmity and tribulation. Blessed are those who endure in peace, For by You, Most High, shall they be crowned. To be a peacemaker is to accept the gift of peace given to us in Christ, a gift that flows out of the wounds of the crucified Christ. To accept this gift, we must accept our own woundedness and then acknowledge our wounding of others, including the trees, the forests and rivers and all creatures of creation. The love that brings peace is accepting woundedness or sacrifice for the sake of others, ultimately, loving others by way of self-gift.

Francis believed that peace begins in the heart. As you announce peace with your mouth, he said, make sure that you have greater peace in your hearts. ... Let everyone be drawn to peace and kindness through your peace and gentleness. Yet he recognized that violence also begins in the human heart because the heart joined to the will has the freedom to choose to love or not to love. Peace is not just the absence of conflict or the tranquility of order, but the peace the Gospel speaks of; peace at the core and center of ones being. Francis simple act of praying with attention, turning his mind and heart to God, helped him grow in awareness of who God was and who he was, and in this awareness he found the energy of transformation both for himself and the world around him. Such awareness lessened his need for frantic control and manipulation. He accepted himself as part of the problem of sinful humanity and strove to realize his dependency on his brothers and sisters and all of creation.

In the Canticle Francis speaks of peace only after he sings of the harmony of brotherhood and sisterhood with the cosmic elements. Creation is reconciled space, Kathy Warren claims, and is in relation as brother/sister. Humans do not appear in the first nine verses of the Canticle because they do not enjoy this harmony. We might say that humans live in the space of sin and thus separation. They live in division with each other and with nature. When they do appear, it is in the context of pardon and reconciliation. Humans are part of the harmony of creation only when they pardon and bear their sufferings, that is, when they can live in a spirit of love that can bridge the distance between divisive persons or between humans and creatures. To be part of the song of creation is to pardon, forgive and accept the weaknesses of others by allowing them to be what they are and loving them as they are. Forgiveness is an excess of goodness given to another for the sake of a new future. This superabundant goodness bridges the separation between human persons or between persons and nonhuman creation. Those who follow the path of peace and reconciliation are liberated from the blindness of heart and can see the presence of the Most High in the simple things of creation.

Peace and reconciliation require a depth of love and it is the centrality of love that leads Francis to address Sister Bodily Death in the last part of the Canticle: Praised be You, my Lord, through our Sister Bodily Death, from whom no one living can escape. Woe to those who die in mortal sin. Blessed are those whom death will find in Your most holy will, for the second death shall do them no harm. Francis tribute to death, calling it Sister, was composed shortly before his own bodily death in 1226. However, he prefaces bodily death by extolling a first death, saying that for those who endure a first death, the second death shall do them no harm. What does Francis mean by this second death? All of Francis life was a death, we might say, because it involved a continual letting go for the sake of the other, a constant dying to self so that Christ might live in him. Francis first death is a death to the self-centered ego, the selfish self who refuses the poverty of existence and the dependency on others, the isolated self who desires to exert itself through power and control over others. This self, in Francis view, must die, for once the self learns to let go of everything that prevents it from being its true self, it finds itself in a web of life, a family of creation. The second death, the death of the body, then becomes a complete participation in the cosmic community of life.

Francis praise of death is a return of love for love. In his own way he tells us that the world is not blindly hurtling itself into extinction but is moved by Christ to Christ that God may be all in all. Perhaps Francis understood that what happened in the death of Jesus anticipated the future of humanity and the cosmos itself. The death of Jesus was not the annihilation of creation but its radical transformation through the power of Gods life-giving Spirit. Jesus resurrection is the beginning of the transformation of the world and this includes the world of nature. That is why in his sermon on the transfiguration Bonaventure could say all things are transformed and transfigured in Christ, for as a human being Christ has something in common with all things: With the stone he shares existence; with plants he shares life; with animals he shares sensation; and with angels he shares intelligence. Thus all things are transformed in Christ since in his human nature he embraces something of every creature in himself when he is transfigured.

But the path to transformation and transfiguration is through self-surrender; it is the path of the crucified Christ. It is giving up isolated existence for the sake of greater union. The death of Jesus is not the end of cosmic history but the beginning of union and fullness of life for all humanity and creation. Death is the passage into lifes fullness. It is the tearing of the veil and the removal of boundaries that prevent us from engaging as relational beings in the unity of love. Death is the release into a deeper, more comprehensive relationship with the whole universe. The human spirit surrenders its limited bodily structure and becomes open toward the universe and, in some way, a true brother and sister to the elements of the universe. What we see in the life of Jesus and in the song of Francis is that God does not create for death, annihilation or frustration, but rather to perfect his creatures unto fullness of their participated being. Just as the human person, soul and body will be transformed in the Resurrection, so too will the cosmos. The whole universe is created by God for a purpose so that the whole created order will be brought into the glorification of the full body of Christ. All of nature is cruciform, Holmes Rolston writes, this whole evolutionary upslope is a calling in which renewed life comes by blasting the old. Life is gathered up in the midst of its throes, a blessed tragedy, lived in grace through a besetting storm. We are called to let go and enter into the storm, to love passionately and extravagantly as God has loved us. We are called into the fullness of life in the universe through the outstretched arms of crucified love.

Creation care: A return of love for love