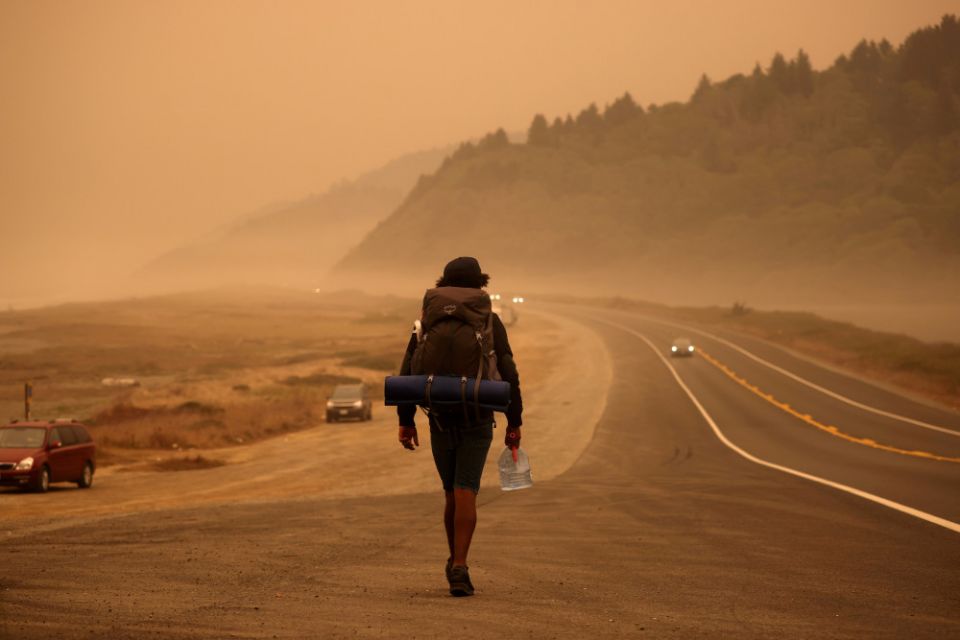 A man in Orick, Calif, walks along the Redwood Highway by the Pacific Ocean Sept. 9, 2020, as smoke from wildfires fills the air. (CNS photo/Reuters/Carlos Barria)

Editor's note: This story originally appeared in CBS News and is republished here as part of Covering Climate Now, a global journalism collaboration strengthening coverage of the climate story.

California's iconic coastal redwoods, some standing since before Julius Caesar ruled Rome, are in a fight for their lives. They are increasingly threatened by wildfires that are larger and more intense due to the impact of human-caused climate change.

And it's not just the redwoods — giant sequoias and Joshua trees are also in trouble. These majestic trees are unique to the West Coast and are an integral part of the fabric of California's storied landscape. But the experts who know and love these trees are genuinely worried about their future.

Last year, 4.2 million acres burned in California's worst fire season on record. Scientists say as the climate warms these fires will grow bigger at an accelerating pace. And although the giant redwoods and sequoias have been historically resilient to natural wildfire, these unnaturally intense fires are starting to overwhelm their defenses, with fires reaching higher up into their crowns.

It is estimated that 10% of the ancient redwoods that burned during the 2020 fire season in places like the Big Basin Redwood State Park, 50 miles south of San Francisco, will die.

A couple of hundred miles to the east, in the Sierra Nevada mountain range, 350 giant sequoias were killed as flames shot hundreds of feet high, burning far up to the canopy. To the south, in the Mojave Desert, about 1.3 million Joshua trees burned as firenadoes tore through invasive grass.

"This fire was on a scale and of an intensity that there are no records of fires that have been that big in this vicinity," Kerbavaz said of the August fire which raged through almost the entire park, engulfing 18,000 acres.

It started as part of a lightning siege of 14,000 strikes which sparked 350 fires statewide. Lightning events like that are almost unheard of in California; this one was a result of a surge of moisture from a decaying tropical system off of Baja California.

While that lightning event can be considered just weather chance, it coincided with a sweltering summer heat wave which was undoubtedly made worse by climate change. This heat, on top of a long-term climate-driven drought, dried out vegetation, turning it into a tinderbox just waiting for lightning bolts to spark fires.

In her 22 years at Big Basin, Kerbavaz says she has witnessed a shift: a once nurturing climate has experienced significant change.

She is concerned that in the coming decades, if the fog continues to shrink, the habitat suitable for redwoods that live further away from the ocean will also shrink.

Since 2000, the western U.S. has been experiencing a megadrought, one of its worst droughts in 1,200 years. On top of that, since 1970, summers in California have warmed by 2 to 3 degrees Fahrenheit. These types of climate conditions, warmer and drier, set the stage for a longer fire season with larger, more intense fires.

For the redwoods — despite their extensive root system, bark 12 inches thick, and having survived repeated fires over their thousands of years of existence — these recent intense fires are overwhelming their natural defenses.

Keeler-Wolf has the duty of surveying the wreckage from the August fires. Pointing up at a huge ancient redwood, he talks about the immensity of the fire.

"It affected the entire tree right up to the very top. This one is a candidate for being pronounced dead, but we haven't pronounced it yet," he said.

Both scientists agree that these coastal redwoods are very resilient. Even when they are heavily damaged from fires, they can re-sprout new trees from their trunks and even their roots.

Kerbavaz explained, "There's also dormant buds by the base that can re-sprout and actually form new trees. Even before the flames were out the plants were starting to come back. Redwoods were re-sprouting at the same time as adjacent areas were still burning."

Although approximately 1 in 10 of the burned redwoods will not make it, historically speaking, Kerbavaz says 90% should survive. But the loss of so many ancient trees, some of which had been standing for thousands of years, means that things will never look quite the same.

"I am hoping for a long lifetime, but realistically, in the next 40 years it may not look like it looked in the 40 years before. A lot of the trees have been burned. So, we do expect the trees to come back, but in some cases they will look quite different," said Kerbavaz.

Sequoias posses many of the resilient qualities of the redwoods, but unlike the redwoods they cannot re-sprout with ease. That, combined with the fact that they live much further inland, away from the moist marine layer of the Pacific Ocean, makes them even more vulnerable to wildfire.

Park Williams is a Columbia University scientist and expert on the connection between fires and climate change. Through is research, he has observed an unprecedented difference in the climate and its impact on the forests. At a meeting in New York City in mid-January, I asked Park what his research has revealed.

Jeff Berardelli: It seems to be happening to the Joshua trees, to the sequoias and to the redwoods. And those are all different microclimates. So what is going on?

Park Williams: Well, there are a lot of things going on, but the one thing that all forests across the western U.S. are experiencing is warming. And so as we warm up the atmosphere, these forests are more likely to burn.

Jeff Berardelli: These fires are able to burn higher up on these trees, causing these trees to die where they wouldn't have died years ago. Is that right?

Park Williams: We know that fires were very common in these forests over the last millennia. These trees are designed to be able to tolerate fire, but they can only tolerate fire if these fires aren't giant catastrophic events. These giant fires with flames that are hundreds of feet tall managed to kill many hundreds of these ancient majestic trees.

As giant as these fires are, Williams says this may be just the beginning. As the region continues to warm, wildfires will get worse at an accelerating pace.

"The really important connection between heat and fire is it's actually exponential. And that means that for every degree of warming that you have in California, the amount of extra forest fire you get goes up more than it did in the previous degree of warming."

All of the scientists interviewed for this story agree that if we don't stop warming the planet, these majestic trees will be facing a losing battle.

"We do fear that there might be some thresholds that are crossed. So that some of the species, some of the things that live here, will no longer be able to be sustained," said Kerbavaz.