Climate change is shifting the goalposts for global sport 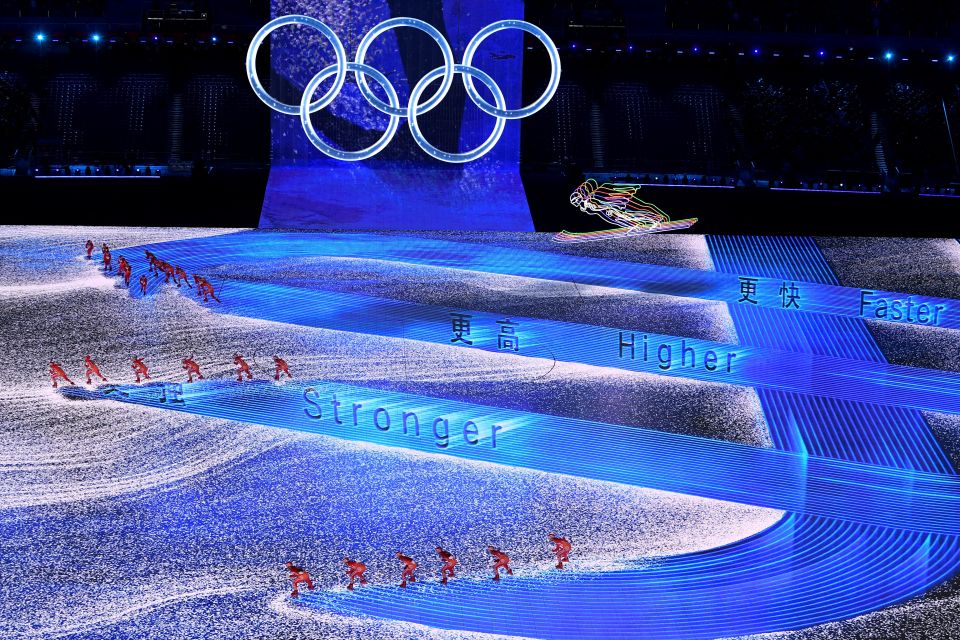 Performers are pictured under the Olympic rings during the opening ceremony of the Winter Olympics at National Stadium in Beijing Feb. 4. (CNS/Reuters/Toby Melville)

Editor's Note: This story originally appeared in Daily Maverick and is published here as part of Covering Climate Now, a global media collaboration strengthening coverage of the climate story.

The 2022 Beijing Winter Games made Olympic history this month by becoming the first Winter Games to be held on 100% artificial snow.

A recent report found that climate change is threatening the Winter Olympics and the future of snow sports, with the dependence on artificial snow changing the nature of the games and the warming climate decreasing potential venues.

And this isn’t just an issue for snow sports. At the 2021 Tokyo Summer Olympics, dubbed the "hottest Games in history,"  athletes battled to compete in high temperatures and humidity and events were rescheduled to earlier hours of the day.

The latest report from the International Panel on Climate Change (IPCC), the Sixth Assessment, published in August 2021, stated: "It is indisputable that human activities are causing climate change. Human influence is making extreme climate events, including heatwaves, heavy rainfall, and droughts, more frequent and severe."

Willem Landman, professor in meteorology at the University of Pretoria and specialist in seasonal to decadal forecasts, told Daily Maverick: "When climate changes in the way that they project, and I believe that projections are reliable, it may lead to having more heat and less rain. And when there’s more heat, obviously, there’s going to be problems for people running marathons, for example, and less water would have a serious impact on all water sports."

Dr. Pedro Monteiro, Chief Oceanographer at CSIR, told Daily Maverick: "The rise in the incidence, magnitude and persistence of extreme events (heat, water cycle, storms) as a result of the continued emissions of greenhouse gas emissions will increasingly constrain our social choices, including sports."

"This is likely also to be felt in the planning of large sports events such as world cups and Olympic games that require long lead times and conditions that accommodate large numbers of people comfortably."

"It is these increasing costs of adaptation and damage recovery in general, and for sports events particularly, that also makes it essential to rapidly cut greenhouse gas emissions and stay under the target of 1.5°C."

Climate variability is when aspects of the climate (such as heat or rain) are different from the average — for example, one year having a hot summer and the next a cooler summer. The key is that this occurs because of natural causes. Climate change is an adjustment in the climate anthropogenically — change caused by humans.

Rainfall, heat, droughts are naturally occurring phenomena, and Earth has variations when there are years with more or fewer of these events.

Climate change doesn’t cause this; however, what the scientific community is telling us is that there is a very strong likelihood that climate change will increase the frequency and intensity of these events.

"And when we have more extremes — like bigger storms and more heat days — those things will impact on sports," said Landman.

Piotr Wolski, senior climate researcher at the ​​Climate System Analysis Group at the University of Cape Town, agreed, saying: "We’re not able to say that event wouldn’t have happened without climate change. … So what we do, for instance, is talk about the changing probability of an event, [i.e.] how often does that event happen."

Wolski says the important thing to focus on is how we expect the climate to change, such as intensification and increased frequency of rainfall, droughts and heatwaves.

Rower Jake Green, who represented SA in the 2021 Tokyo and 2016 Rio Summer Olympics, said the national squad has faced issues with lack of rainfall, explaining how dam levels affected their high-altitude training camps in Lesotho. 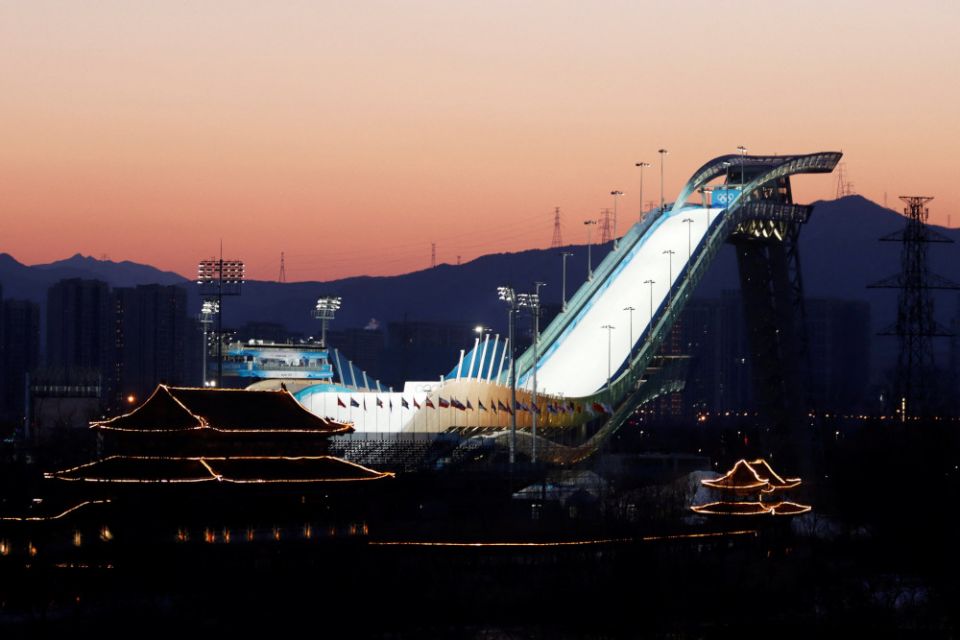 Big Air Shougang, a competition venue for the Beijing 2022 Winter Olympics, is seen at the Shougang Park during sunset in Beijing Feb. 2, 2022. (CNS/Rueters/Florence Lo)

"We’ve had to launch like 20km further up the river because there’s no water left in the dam, which is crazy. When we first went to Katse Dam in 2013, it was like 80 to 90% full. And to actually look at the water receding, it’s really, really scary."

Green and his teammates said, in recent years, rowing camps in Tzaneen and Ebenezer in Limpopo had to be canceled or rescheduled because dam levels were too low.

Wolski said: "Every single situation has different drivers and it might or might not be [influenced by climate change] … It’s tricky to say that a drought is linked to climate change because there’s many things that might influence it — there might have been a mismanagement of water resources."

However, it is worth noting that the IPCC Sixth Assessment reported: "Human-induced climate change is also contributing to increases in droughts in some regions."

Tetelo Maphaka, cricketer for the Central Gauteng Lions Academy and Wits University first team, said effects were seen more at club level. "There’s a lot more moisture in the air, there’s a lot more rain, and those club fields — the drainage isn’t as great as a professional field — so you’ll find a lot of games getting canceled or rescheduled because the field was waterlogged."

The IPCC report stated: "Heavy rains will become more frequent and intense with more warming. At a global scale, extreme daily rainfall events are intensifying by about 7% for each 1°C of global warming."

Wolski said, unlike changes in temperature, which show an almost consistent upward trend, changes in rainfall are variable.

The IPCC report said that "since the 1950s heavy rainfall events have become more frequent and intense over most land areas where there is sufficient data to see a trend."

In line with this, the study Historical rainfall trends in South Africa: 1921–2015 demonstrated how rainfall events have increased over the past several decades.

"Perhaps anthropogenic climate change?" he said. "But that cannot be said with certainty without a dedicated study."

George Bradley, who has been an athletics coach for 34 years and coached his athletes to more than 50 national titles, said: "The more extreme climates and climate- or weather-related incidents and events over the years seem to have gradually had more impact on sporting events."

In athletics, events have had to be cut short, postponed and even canceled in the face of such occurrences, he said.

Climate change has required a more focused approach to training, such as considering weather patterns when doing altitude training and scheduling competitions more carefully around hot and cold conditions, he said. "An example is the extreme ultra running event in China in 2021, when some runners lost their lives due to the extreme cold."

Cian Oldknow, SA female pro track, road and cross-country athlete, said: "I think maybe a big thing that we’ve noticed is there’s been a lot of late-afternoon thunderstorms, and while it’s fine to train in the rain, running in a thunderstorm, you can’t because of the lightning."

Oldknow said four or five consecutive sessions were canceled in December because of non-stop rain and thunder.

The IPCC reported: "With more global warming, we will continue to see intensification of the global water cycle. Rain and water flows are expected to become more variable within seasons and from year to year. Average annual rainfall on land is expected to increase with greater warming."

"Heat is a tough one, because it gets really, really hot with some training. But it’s hard to say if it’s because of climate change or if it’s just summer," said Oldknow. 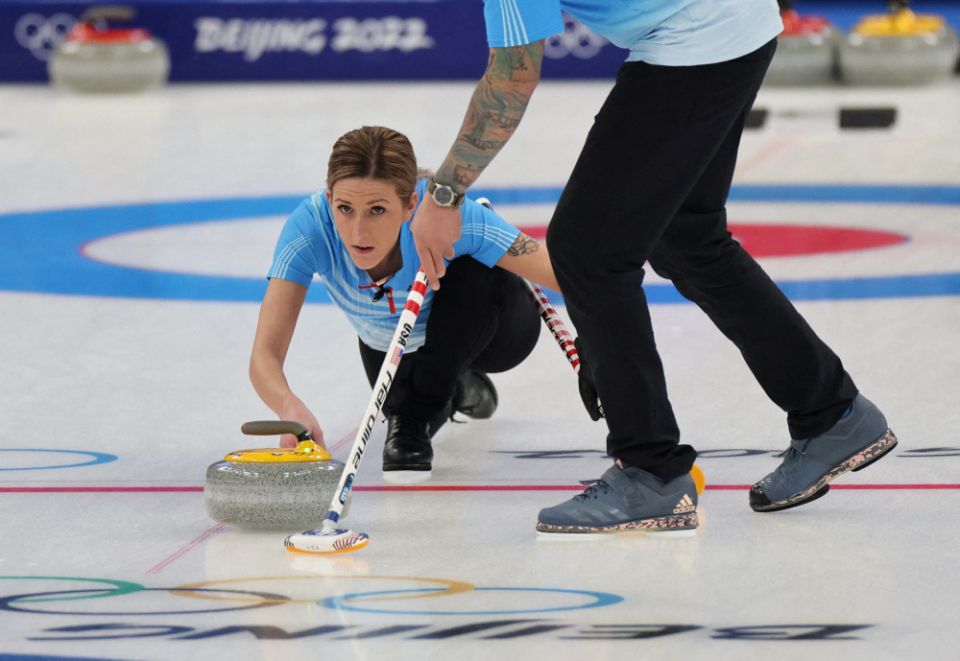 Christopher Plys and Victoria Persinger of the United States are pictured in action during a curling mixed doubles round robin session at the Aquatics Center ahead of the Beijing 2022 Winter Olympics Feb. 2, 2022. (CNS/Rueters/Evelyn Hockstein)

A report from the Global Change Institute at Wits called Climate impacts in southern Africa during the 21st Century stated: "The number, intensity and duration of heatwaves in South Africa will increase steeply in future as a result of global warming. The capacity to perform manual labour out of doors decreases dramatically as the occurrence of heatwaves increases."

Mike Schlebach, big-wave surfer and CEO of Protect the West Coast, told Daily Maverick that the most prolific ways he’d seen climate change affect surfing in the Cape were changes in storm sizes and the wind shifting more south and changing the swell. The predominant wind now has changed from a southeasterly to a southerly, or at least a south southeasterly.

"Which I know doesn’t sound like a big difference, but … [even a] five- or 10-degree difference can make the difference between being onshore or offshore."

Wolski said we could possibly link the changes in wind and swells conceptually or by association to climate change.

"The whole region of Cape Town is affected by the so-called mid-latitude westerlies — [these are] our fronts," explained Wolski.

"And that’s the large circulation pattern that is essentially from 30 degrees south to 60 degrees south. As a result of climate change, what is happening is that you have an expansion of the tropics and shift of those systems southwards."

Landman said: "Even if we haven’t seen anything about climate change in our current life, there is a very strong indication that it’s going to shift."

"And if we don’t start preparing for this … we may be caught offsides."

EarthBeat | Climate change is shifting the goalposts for global sport