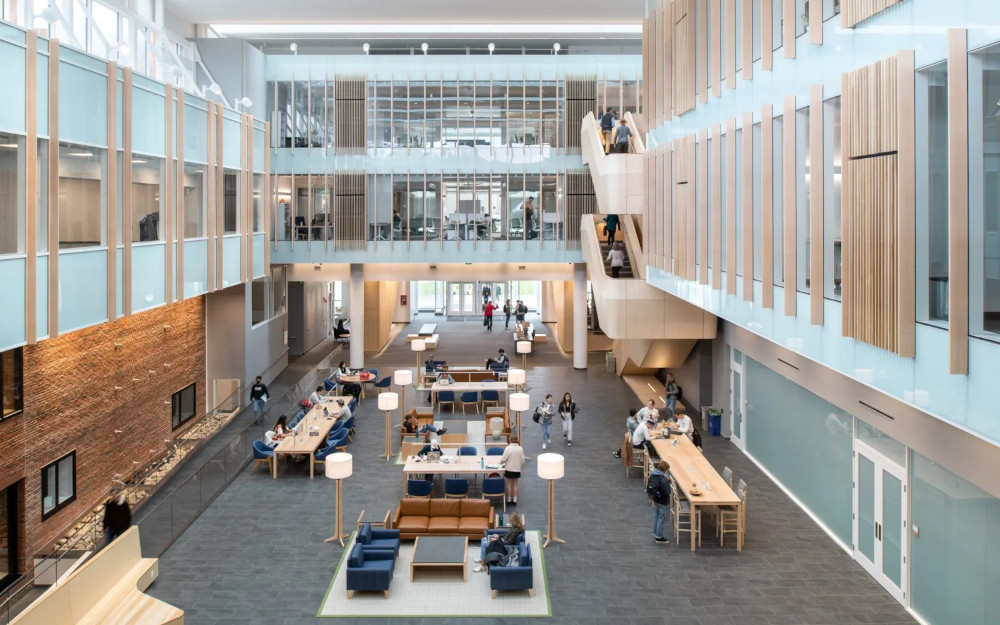 Dartmouth College is one of the largest greenhouse gas emitters in New Hampshire, but at an innovation and technology festival last month, the Ivy League institution showcased its efforts to reduce that footprint.

Students and alumni toured the new $160 million Arthur L. Irving Institute for Energy and Society, a 53,000-square-foot, glass-fronted building that sustainability director Rosalie Kerr says embodies the college's "sustainability ethos." Tucked between the college's schools of business and engineering at the campus's western edge, the four-story building is designed to use a small fraction of the average building's energy demand.

"Dartmouth is really good at what I call flinty sustainability," Kerr said. "We focused on the less-glamorous things, like the building envelope. It's a kind of Yankee frugality focus."

Improving efficiency on the 200-plus-year-old campus is a cornerstone of the climate plan announced by Dartmouth's administration last October. There are at least six LEED-certified buildings on campus; another four, including Irving, are pursuing certification. The administration also said the college would increase funding for research and education on the climate crisis, and would not make any new investments in fossil fuel extraction, exploration and production funds.

"As an academic institution, the greatest impact we can have to address the climate crisis is through our core mission," Dartmouth President Philip J. Hanlon said in a statement at the time.

But some would like to see the Ivy League institution moving more quickly. The college's central heating plant continues to burn No. 6 fuel oil. That made it the 10th highest emitter of greenhouse gasses in the state in 2020, when it emitted the equivalent of 39,351 metric tons of carbon dioxide, according to the U.S. Environmental Protection Agency's Greenhouse Gas Reporting Program.

Plans to replace that heating system with a wood-burning biomass plant were abandoned in December 2020 after three alumni, all accomplished climate researchers, circulated a letter of objection explaining that burning wood instead of oil would increase, not decrease, overall carbon dioxide emissions.

In 2017, the college committed to cutting its greenhouse gas emissions in half by 2025. Kyle Spencer, a junior at Dartmouth majoring in environmental studies, says while the college may be sincere in its desire to hit that target, at this point, it doesn't appear likely.

"There are two prevalent issues," said Spencer, who recently wrote an op-ed for the student newspaper bemoaning the lack of progress on fossil fuel emissions. "One is a lack of clarity with the student body and alumni. And second is urgency."

The new Irving Institute has a natural ventilation system that relies on the glass facade in front to act as a "solar chimney," drawing heated air up and out of rooftop exhausts. Radiant heating and cooling regulate room temperature by circulating water through tubes, either in ceiling panels or beneath the floor.

Nearly all of the work and laboratory spaces are flooded with natural light. Exterior shades automatically lower when the sun is heating up the building, while the triple-glazed windows open automatically when conditions are right to invite in fresh air.

The glass front has two layers, helping to insulate the spacious central atrium just inside. The roof supports 90 kilowatts of solar panels.

"It's not anything super new or different," said James Pike, senior project manager at Dartmouth. "We just tried to maximize energy efficiency throughout." 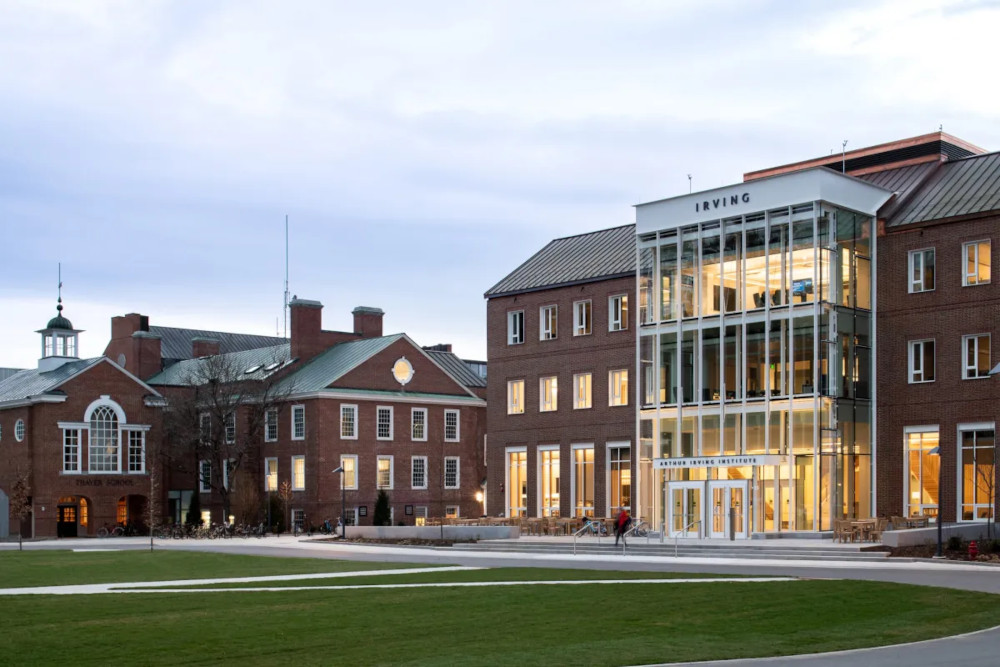 The building is a step in the right direction for the school's emission goals, but its namesake — the chair of Canadian fossil fuel giant Irving Oil — highlights a fundamental tension behind the school's recent climate moves. While the institution is divesting its endowment from fossil fuels, it is accepting tens of millions of dollars from fossil fuel industry leaders to fund the Irving Institute, as well as the Tuck School of Business' Revers Center for Energy, Sustainability and Innovation, also housed in the Irving building.

The Revers Center is named for Daniel Revers, a Dartmouth alum who is a founder of ArcLight Capital Partners, a Boston-based private equity firm that is heavily invested in fossil fuel infrastructure.

Meg Sheehan, an environmental lawyer in New Hampshire who was a vocal critic of Dartmouth's biomass plant proposal, said she doesn't believe either institute can operate without influence from their fossil-fuel funders.

"It's an example of the corporate takeover of the so-called clean energy industry by big corporations trying to greenwash themselves," Sheehan said. "I don't know how it passes the straight-face test, frankly."

The college acknowledges the seeming incongruity on the FAQ page of the Institute's website. Among the questions are, "How will the Irving Institute ensure the independence of its research?" The reply says the Irving family has affirmed their commitment to academic freedom by written agreement with the college. 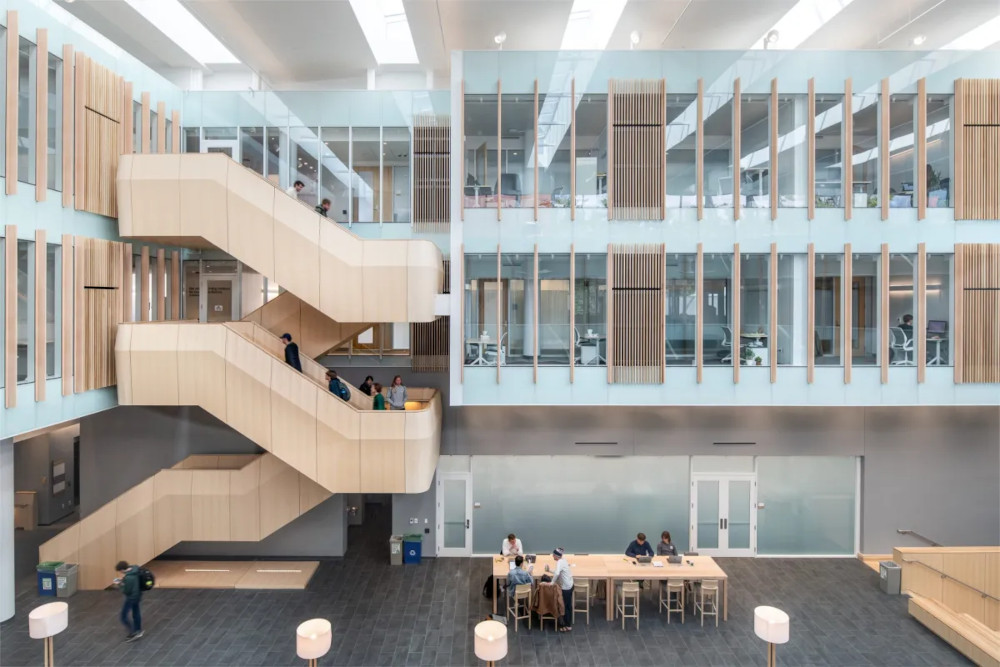 Kerr, the sustainability director, said it is her hope "that the people who own and run fossil fuel companies are thinking about how to transition into non-fossil fuel companies. By activating those people and letting them know we are interested in talking about these things, Dartmouth can help with what needs to be a bigger pivot."

She said the college is working on transforming its heating system, but it is a "massive" project that will likely take 10 years. They are gradually shifting from the central fossil-fuel steam heating system to a more efficient low-temperature hot water heating system. That requires putting in a new piping system throughout campus, which in many cases also requires significant building renovations. About a third of the campus's 5 million square feet is connected to the hot water system so far, she said.

They are also studying and testing low-carbon ways to heat the water, such as ground-source heat exchange or solar thermal.

"Dartmouth is kind of a microcosm of anywhere — our infrastructure is as much as 200 years old, and then there are buildings of varying ages since then," she said. "So transitioning to a more modern system is a process; it's not something you can flip a switch on."

Jock Gill is part of a group of Dartmouth alumni that lobbied the college to divest from fossil fuels for years. Now that it has, some members are talking about the next steps: how to get the college to move more aggressively on electrification and decarbonization.

"The college is clearly looking at the issues — the question is, what's the overall sum of the effort?" Gill said. "Dartmouth is basically a conservative institution. Those of us who believe there's a climate emergency are not sure that a conservative approach is what's called for."