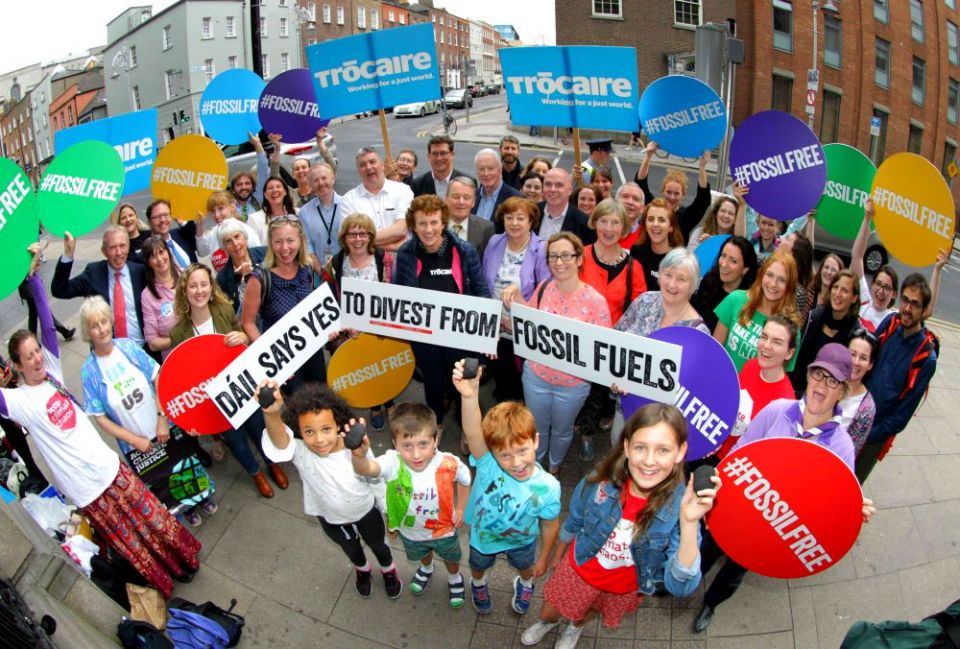 People celebrate July 12, 2018, after the passage of the Fossil Fuel Divestment Bill in Ireland. (Mark Stedman)

Dublin — Ireland made history July 12 when it became the first country in the world to pass a bill committing the country to the divestment of all of its holdings in fossil fuel companies.

The passing of the Fossil Fuel Divestment Bill has been hailed by climate action campaigners as a boon to their efforts to pressure other countries to sell off their fossil fuel investments — industries which have been a major contributor to climate change.

The landmark divestment bill is a first among the 195 nations that signed on to the Paris Agreement on climate change in 2015. It requires the Ireland Strategic Investment Fund to divest all public money from peat, coal, oil and gas companies nationally and internationally "as soon as is practicable." Over 300 million euros is believed to be at stake.

The Ireland Strategic Investment Fund is worth about 8 billion euros, which may seem small compared to a country like Norway with a state fund of 1 trillion euros. But the significant difference is that Ireland has pledged to divest 100 percent from fossil fuels, whereas Norway has committed to partially divest from fossil fuels, targeting some coal companies but maintaining its oil and gas holdings.

The bill before the Irish parliament had cross-party support and was the culmination of more than two years of lobbying by politician Thomas Pringle, an Independent member of parliament representing County Donegal in the northwest of the country. His constituency experienced an extreme weather event in August 2017 when two hours of torrential rain washed away a substantial amount of infrastructure. Over the past 12 months, Ireland has experienced three other unprecedented weather events including Hurricane Ophelia, the Beast from the East snowstorm and the current heat wave-induced drought. Now that climate change appears to have a direct impact at home, people are worried and want the issue addressed.

Pringle was supported in his initiative by a network of civil society groups, including Trócaire, the Irish bishops' development and emergency aid agency, which has been highlighting and lobbying on climate change for well over a decade. It has seen the impact of climate change firsthand in the developing world where the agency does most of its work.

Lorna Gold, Trócaire's project coordinator on Laudato Si', told NCR that the agency was "absolutely delighted" that Ireland finally is taking a position of leadership on a key aspect of climate policy. But her delight is tempered by the realization that Ireland's recent track record on the environment has been patchy. The 2018 Off Target report published by the Climate Action Network Europe, a major non-governmental coalition working on climate and energy issues, rated Ireland as the second-worst performing European Union member in tackling climate change.

Gold, who is author of the recently published Climate Generation: Awakening to our Children's Future, which documents her personal experiences of climate activism and motherhood, believes Ireland is "at an interesting point in terms of its response to climate change." On one hand is the success of the new bill and on the other is Climate Action Network Europe's report which "placed us just above Poland in terms of our climate commitment — 27 out of 28 countries in Europe."

The government has "played a very astute and deliberate game trying to convince the public that the country is doing something about this issue while its strategy around expansion of the beef and dairy industry is undermining targets and commitments," she said. "But it is not just the agricultural sector, we need to look at transport and at the lack of retrofitting of houses — we are lagging behind in most areas."

However, Gold also detects a renewed public awareness of climate change over the last two years. She believes the government-instituted Citizens' Assembly, which deliberated on climate change and produced a report backing a robust carbon tax, investment in public transport and a shift away from beef and dairy by the farming industry, has been instrumental in shifting the public's understanding.

"When people are given the right information on this issue and when they are given the time to deliberate on it, they really understand what is happening and want robust measures," she said. "The noises coming out of the political classes now on climate change are starting to shift."

A government committee, which includes Gold and theologian Columban Fr. Sean McDonagh, has been set up to address the outcomes of the Citizens' Assembly, and a national dialogue on climate action aims to address the knowledge gap that exists between citizens and the science on climate change.

But the proof of where Ireland is headed will be in the findings of the National Mitigation Plan's report because as Gold warns, "talking is cheap — and I think people are genuinely fed up with so much talking about this issue when we can see the impact that it is already having."

Her caution is echoed by theologian Msgr. Dermot Lane, the retired head of the former Mater Dei Institute of Education in Dublin and contributor to the book Laudato Si': An Irish Response. He attended the recent Vatican conference to mark the third anniversary of Pope Francis' environmental encyclical, "Laudato Si', On Care for Our Common Home." The message from scientists at the conference, he told NCR, was "globally we are losing the struggle against climate change. We are not meeting the targets of the 2015 Paris Agreement." 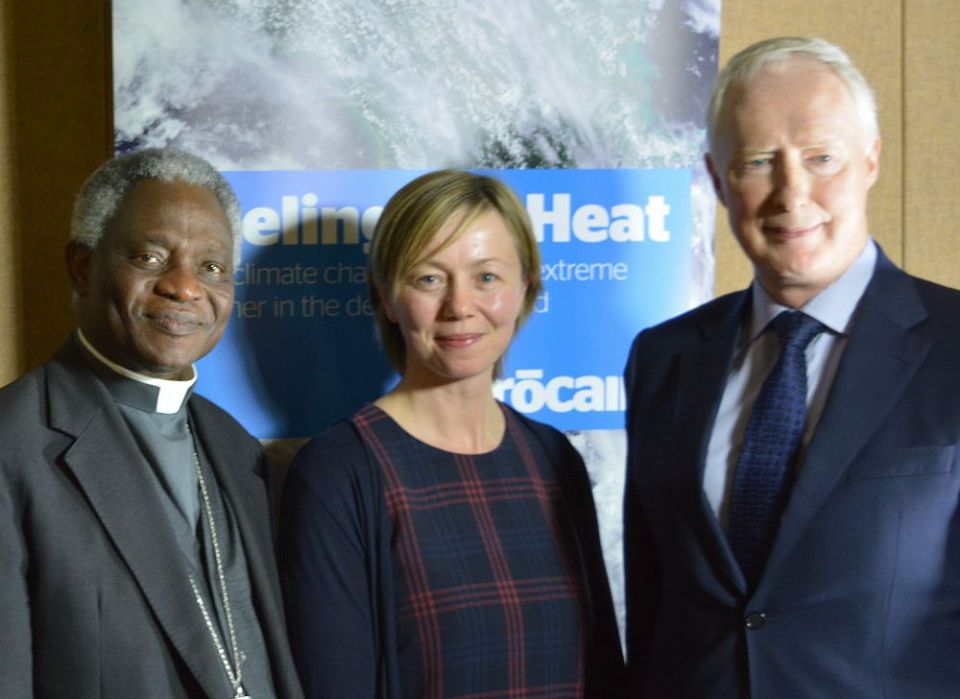 Furthermore, Lane is under no illusions that Ireland is now on top because of the Fossil Fuel Divestment Bill. The country is, rather, "second last in the class, having failed to meet its 2020 targets." In January, Prime Minister Leo Varadkar acknowledged that Ireland is a climate "laggard" when it comes to climate commitments. Lane added that failure to meet carbon emissions targets will be costly for Ireland as the country will have to pay EU fines of up to 500 million euros for this negligence.

Though Gold and her Trócaire colleagues were initially "quite skeptical" about the Fossil Fuel Divestment Bill, she ascribes its success to three factors, the first being the precedent set by Trócaire's successful 1990s campaign which pushed the Irish government to divest the national pension reserve from companies linked to landmines.

The second is the current political state of play in Ireland. The country is being run by a minority government that is dependent on cross-party collaboration to survive.

"This bill was a real example of what can be achieved when there is cross-party collaboration," Gold said. "It was cross-party across all the parties in the end. There was nobody left outside of the collaboration on this issue."

The third factor is the growing divestment movement both nationally and internationally as the public is concerned by the proliferation of extreme or freak weather events. In Ireland, that same public is incensed by U.S. president Donald Trump's climate change skepticism, his decision to withdraw from the Paris Agreement and his removal of climate scientists from the EPA.

"I think it is having the opposite effect to what he had expected," Gold said. "I think globally it has intensified and focused minds on the need to have a very robust response to climate change."

Gold is currently involved in a project to support the church in Ireland to divest from fossil fuels, "working collaboratively with the bishops' conference and their finance committee to examine what investments they have in fossil fuels and to look towards divestment, hopefully in the near future."

She is also working "very closely with religious orders in Ireland and across the world to divest from fossil fuels." To date, six Irish religious orders have made divestment commitments, and Gold is hopeful that the number will rise significantly in the next few years. So far, 90 Catholic institutions and organizations across the world, including Dayton University, the Diocese of Assisi, Italy, the Sisters of Mercy in Ireland, and the Kiltegan and Columban Fathers, have all publicly committed and signed a divestment pledge.

"It is a growing movement within the church," Gold said.

Lane said that the church in Ireland has been "moving slowly in implementing the papal encyclical but it is moving. The bishops are listening to Trócaire and to the Laudato Si' working group of the [Council for Catechetics of the Irish Catholic Bishops' Conference]."

The church has agreed to adopt a "Season of Creation" in September as a follow-up to the papal visit in August.

"The bishops have agreed to make a connection between the World Meeting of Families and Laudato Si', pointing to the link between the care of the human family and the wider family of God's creation," Lane told NCR. "I do know that the bishops are very seriously considering divesting their funds from fossil fuel, and have reached an agreement to do this in principle, and are now waiting for individual dioceses to take action and sign up to the agreement."

For Gold, Francis' recent comments after a meeting with oil industry executives and his recent remarks at the Laudato Si' anniversary conference "have really encouraged us that this issue is at the forefront of Catholic social teaching and that we need to protect the environment for creation."

"That means joining the dots between our actions in the financial and economic sphere and what we do in terms of our care for our common home," she said.

A version of this story appeared in the Aug 10-23, 2018 print issue under the headline: Ireland adopts 100-percent fossil fuel divestment .