'It has been completely disastrous': second hurricane hits Nicaragua 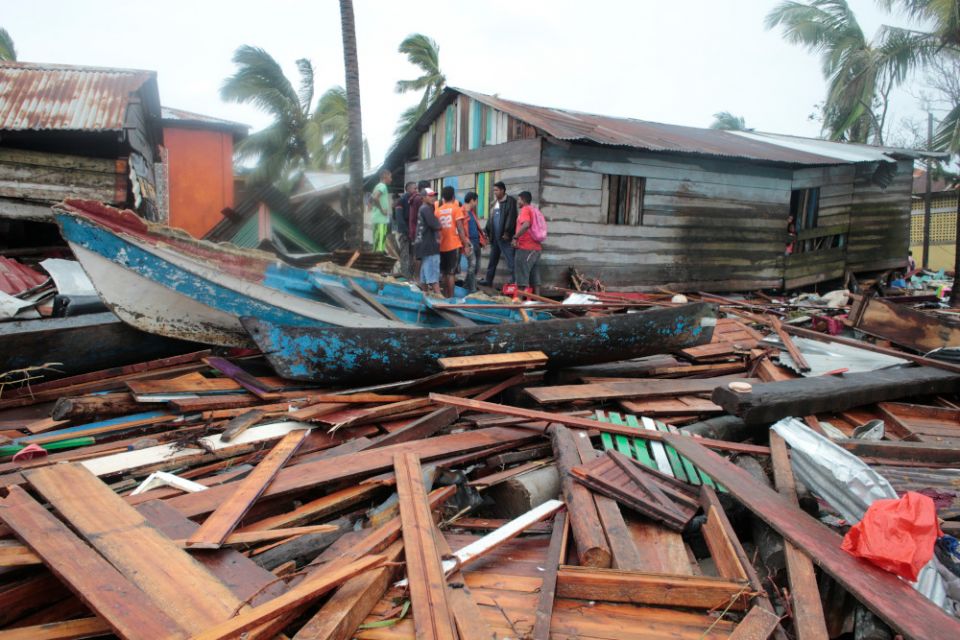 Residents stand amid debris outside homes in Puerto Cabezas, Nicaragua, Nov. 17, 2020, in the aftermath of Hurricane Iota. The Category 4 storm hit the coast of Nicaragua near the border of Honduras Nov. 16, causing storm surges and flooding and further damaging buildings already wrecked by Hurricane Eta. (CNS/Reuters/Oswaldo Rivas)

"The shelters are full of evacuated people and families ... who today cannot return to their homes. They're going to go to the homes of family members or stay in the shelters," Fr. Javier Pla García said in a message from the city of Puerto Cabezas.

"Our relief plans have to return to square one and we will have to reorganize," Pla said, adding that he was unaware of any loss of life, although some communities were still incommunicado and people were looking for family members.

The Category 4 storm hit the coast of Nicaragua near the border of Honduras around 9:40 p.m. Nov. 16, causing storm surges and flooding and further damaging buildings already wrecked by Hurricane Eta. The U.S. National Weather Service called Hurricane Iota the strongest storm of the 2020 season; Hurricane Eta was the second-strongest storm.

"It has been completely disastrous," said Fr. Rodolfo French, an indigenous Miskito priest and pastor of St. Raphael the Archangel Parish in Waspam, in the region hit by the hurricanes.

French spoke to Catholic News Service from the national capital, Managua, where he had traveled for a medical appointment and to purchase supplies for rebuilding after Hurricane Eta.

But he said the last report from a colleague in Puerto Cabezas, 30 miles north of where Hurricane Iota made landfall, spoke of the storm "completely destroying the church. The whole ceiling is completely on the ground. The seminary [was left] without a roof and the walls cracked. The bishop was staying there; they had him protected in a room, water was leaking in. But he is taking care of the seminarians locked in the room."

French said hunger was a looming crisis as many people lost their crops of rice, yucca and plantains.

Hurricane Iota weakened to a Category 2 storm as it crossed Nicaragua. It caused flooding and cause damage in neighboring Honduras and was eventually expected to reach El Salvador.

In Progreso, Honduras, Fr. Ismael Moreno Coto, director of Radio Progreso, sent a video to friends showing the flooding in front of his residence; the street looked like a river. He said the rain was expected to continue for 24 hours. 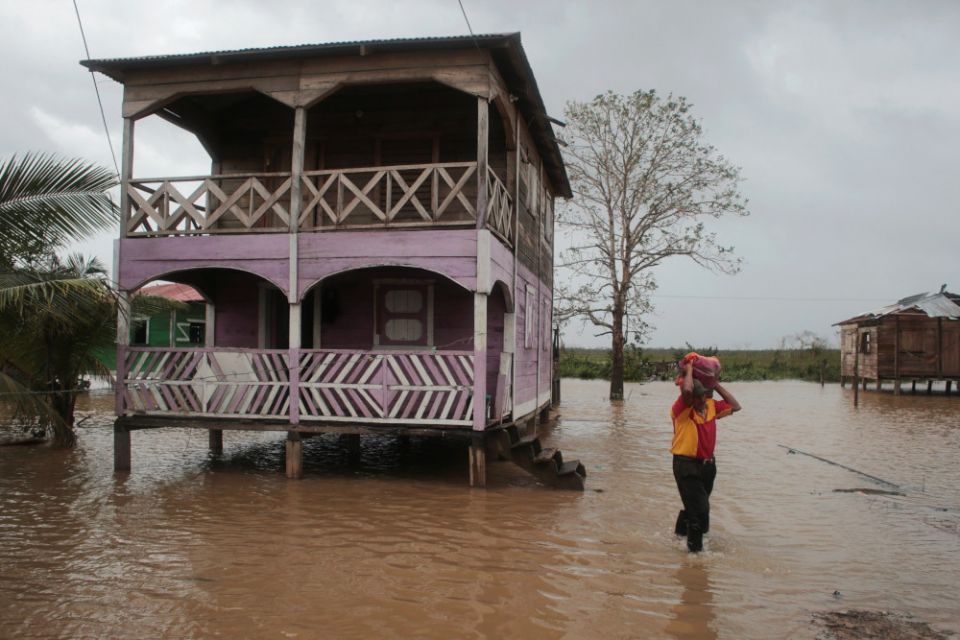 A resident carries belongings through floodwaters outside a home in Puerto Cabezas, Nicaragua, Nov. 17, 2020, in the aftermath of Hurricane Iota. The Category 4 storm hit the coast of Nicaragua near the border of Honduras Nov. 16, causing storm surges and flooding and further damaging buildings already wrecked by Hurricane Eta. (CNS/Reuters/Oswaldo Rivas)

Before Iota reached Central America it pummeled the Colombian island of Providencia, where two people died and more than 30 were injured, according to government officials.

Measuring only four miles in length by 2.5 miles in width, Providencia is one of the smallest inhabited islands in the Caribbean and has a population of about 6,000 people. Colombian government officials said eight out of 10 homes in Providencia were "completely destroyed" by the hurricane, as well as the local hospital.

"It's a devastating situation," President Ivan Duque said while visiting the island Nov. 17 to assess the damage. "But we will help this treasure of Colombia to stand on its feet again."

On the Colombian mainland, church groups helped to collect food and emergency supplies for the people of Providencia, while Caritas Colombia set up a bank account to receive donations for the island, which was clipped by the hurricane's eye Nov. 16.

Providencia's sister island of San Andres, which has about 100,000 people and lies 55 miles south, was not as hard hit, but hundreds of homes there also sustained some kind of damage from the hurricane.

Colombian officials said that it would take a year to recover Providencia's infrastructure, made up largely of wood panel homes. The island's remote location and rich marine life have made it popular with tourists yearning to experience a less-developed side of the Caribbean.

Before the hurricane hit, the church's aid agency, Caritas, and parishes again mobilized to provide shelter to populations still trying to clean up and rebuild after Hurricane Eta deluged Nicaragua, Honduras and Guatemala.

Fr. Francisco Chavarría, Caritas director in Nicaragua, told Catholic News Service Iota would bring "more intense rain" and have a wider radius. Parishes and chapels were again being converted into shelters and priests were helping evacuate people, many of whose homes had their roofs blown off and had lost their modest crops, he said.

Hurricane Eta lost steam as it moved across Central America, becoming a tropical depression. But it still deluged an already saturated region, triggering mudslides, flooding and rising rivers, which washed away bridges. An estimated 200 people died throughout Central America and southern Mexico.

Parishes in Honduras were preparing to assist people displaced by flooding, said Fr. Germán Calix, Caritas Honduras director. Some people resisted evacuation orders with Hurricane Eta, but he said those admonishments were not being ignored with a second hurricane expected.

Calix attributed the enormous hurricane damage in Honduras to an "ecological disaster," in which deforestation has been rife, and said climate change has had consequences. He also spoke of a poor government response as politicians focus more on elections in 2021 than Honduras' present problems. 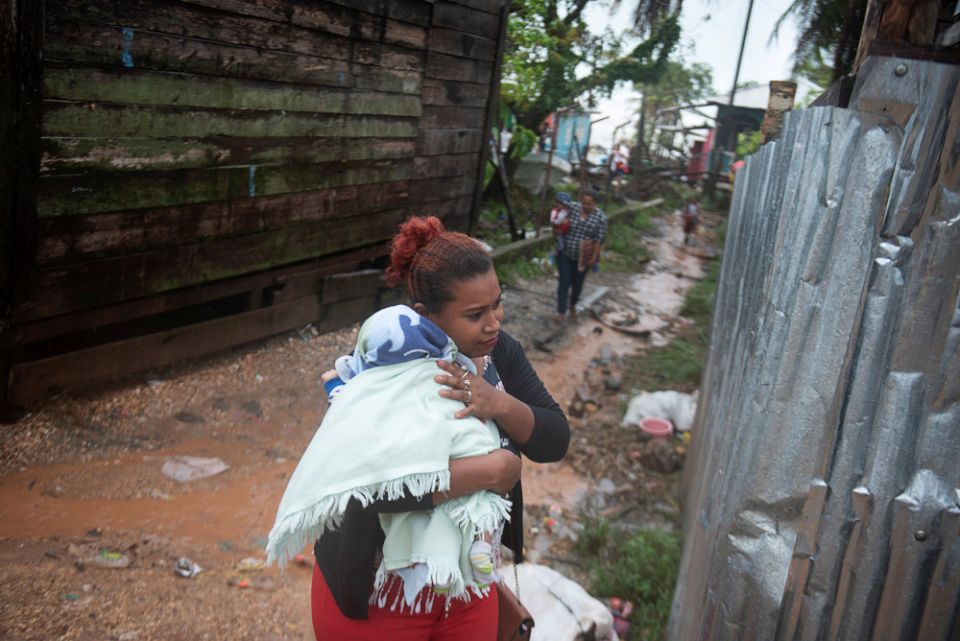 A woman protects her baby from the rain as Hurricane Iota approaches Puerto Cabezas, Nicaragua, Nov. 16, 2020. Iota was the second Category 4 hurricane to hit the area within two weeks. (CNS/Reuters/Wilmer Lopez)

Hurricane Mitch heaped misery on Honduras in 1998 as it sat over the country and dropped record rainfall. It claimed an estimated 9,000 lives. Some in Honduras say the most recent storm — while not as destructive — felt similar to Hurricane Mitch in some areas.

"This was harder than Hurricane Mitch [locally] in the sense that the water density was far bigger," Franciscan Fr. Alberto Gauci wrote in an email from the Olancho region after Hurricane Eta passed through. "What happened here was that two big rivers ... became one big ocean of water that changed all the map of Olancho."

Heavy rains in Guatemala also caused flooding, along with mudslides. A mudslide buried homes in the indigenous village of San Cristóbal Verapaz and left an estimated 100 people missing, according to Guatemalan authorities.

"The flooding was of such a magnitude that many people had to spend up to five days on the roofs of their homes ... waiting for rescuers to arrive," Bishop Domingo Buezo Leiva of Izabal in eastern Guatemala told CNS.

"Everything was lost. The hopes people had of harvesting something in three months is something they no longer have."

The bishop said parishes and Caritas responded to Hurricane Eta by organizing collections of food and household items. But a second storm would be devastating and would further motivate people — already desperate due to the pandemic — to try migrating to the United States.

"The migration, in both Honduras and Guatemala, is surely going to grow," he said, "but I don't know how because the [enforcement] measures are increasingly rough."

Contributing to this story was Manuel Rueda in Bogota, Colombia.

EarthBeat | 'It has been completely disastrous': second hurricane hits Nicaragua