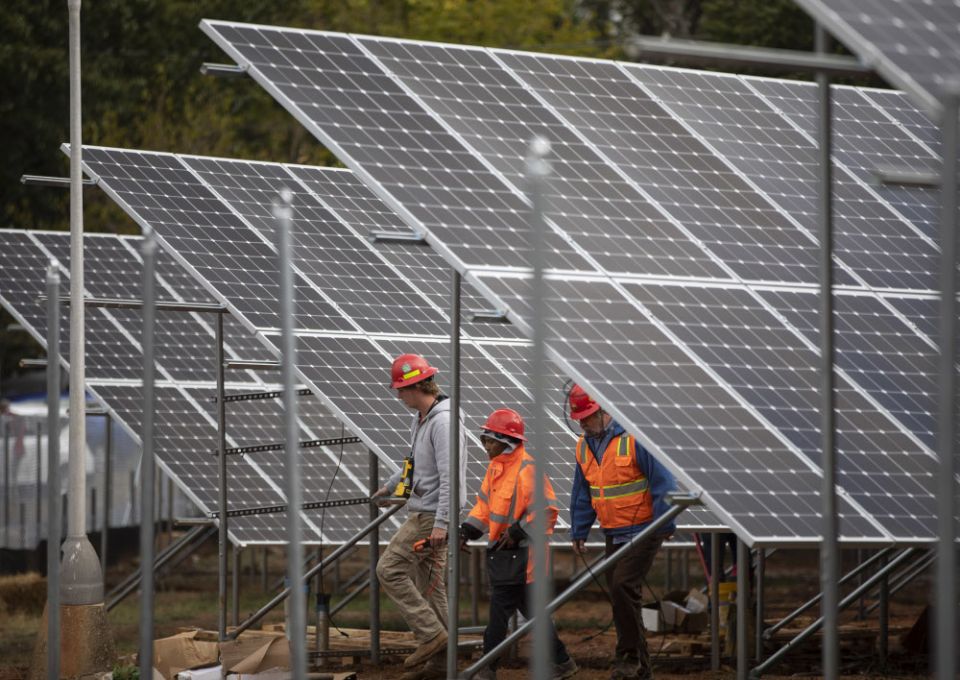 Workers in Washington are seen near solar panels Oct. 17, 2019, that are on the property of Catholic Charities of the Archdiocese of Washington. The solar panels will be leased to produce renewable energy for Washington residents. (CNS/Catholic Standard/Andrew Biraj)

About half of of the array's 5,072 panels have been installed. It is the largest solar project in Washington and is expected to be completed and operational by early 2020.

"The Lord gave us a beautiful day to celebrate something pretty special for us," said Msgr. John Enzler, president and CEO of Catholic Charities of the Archdiocese of Washington at the event.

Attendees included Washington Mayor Muriel Bowser, representatives of Catholic groups and more than two dozen of St. Teresa of Kolata's Missionaries of Charity sisters who care for the poor, elderly and sick at the neighboring home.

Enzler said when he asked the sisters for permission to have the large-scale project constructed on the field next to their home, the convent's superior and the order's superior in the United States said yes, as did their provincial council in Kolkata via a typewritten letter, all within one day.

The sisters, he said, are "superstars" and provided a key part of making the project possible as partners in the effort to follow Pope Francis' call to care for the environment in his 2015 encyclical, "Laudato Si'."

The project's partners include Catholic Charities, which is leasing the land; IGS Solar, which is financing the project; and Solar Energy Services, the general contractor constructing the array. Catholic Energies – a program of the Catholic Climate Covenant based in Washington – is the project's developer.

A fact sheet produced by the partner agencies said the array will generate 2.7 million kilowatt-hours of energy per year, equivalent to powering about 350 homes. The proceeds will offset nearly all of the energy costs of Catholic Charities' 12 properties in Washington and also fund maintenance costs for the Gift of Peace building.

Patrick Smith, vice president of business development for IGS Solar, said the project is one of the "most rewarding" his company has ever done because of how it will benefit the community.

"This project can serve as a shining example – pun intended – of what is possible when public, private, religious and community groups work alongside each other to accomplish a common goal," he said.

Gregory similarly called the project "a great expression of the collaborative spirit of this local church" in working together with industry experts and community members.

Kevin Virostek, vice chairman of Catholic Charities' board of directors, said the solar array will help the agency save about $250,000 in annual energy costs, so in addition to helping care for the environment, it "enhances our ability to serve those most in need."

"The impact I hope it has is that other Catholic agencies and institutions will see that energy efficiency and renewable energy work is the right thing to do by God's creation and helps their bottom line, so that then supports their core mission," he said. 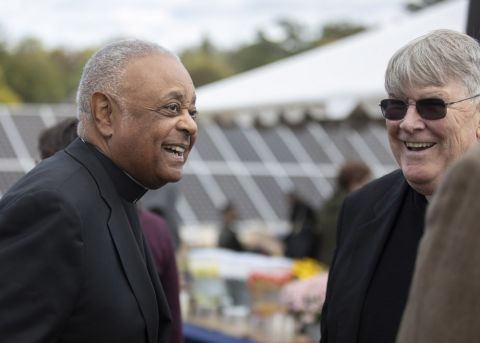 Washington Archbishop Wilton Gregory and Msgr. John Enzler, president and CEO of Catholic Charities of the Archdiocese of Washington, share a laugh before the Oct. 17, 2019, blessing of solar panels that are being leased to produce renewable energy for Washington residents. More than 5,000 ground-mounted solar panels have been installed on the Catholic Charities' property. (CNS/Catholic Standard/Andrew Biraj)

"Think how many people in need we could help and think what an expression of fidelity (that would be) to Pope Francis' call to care for God's creation," she said.

Bowser praised Catholic Charities for answering Francis' call to help preserve the environment, and said the project demonstrates to other archdioceses and organizations "what they can do" in that regard.

After the ceremony, in an interview with the Catholic Standard, Washington's archdiocesan newspaper, Dan Misleh, executive director of Catholic Climate Covenant, called the project "a dream come true."

Catholic Climate Covenant was formed in 2006 to promote ecological awareness and to implement Catholic social teaching on ecology and offer programs and partnerships.

During the ceremony, Misleh said his organization "works to help our faith community in the United States rise to the challenge (of addressing) environmental injustice and climate change," especially how it impacts the poor.

He said projects like this could be replicated by other Catholic institutions across the United States, and the savings in energy costs could go toward caring for those in need, offsetting tuition costs, paying for a youth minister or doing outreach.

"You have shown others a hopeful path forward in this age of climate consequences," he told project partners.

After the ceremony, guests toured the grounds of the solar array, including some of the Missionaries of Charity, who got a closer look at the energy matrix being installed on the former grassy field near their home.

"It's beautiful," said Sister Lizen, superior of the Gift of Peace convent. She said the sisters will be happy to be able to use the energy savings "to take care of more homeless people."

Roger Perry, vice president of Solar Energy Services, which designed and is building the project, noted that about 15 to 20 workers have been installing the solar panels for the past two months. Each panel measures about 3 feet by 6 feet and are arrayed at approximately a 35-degree angle, facing true south, he said, noting they will be able to generate some power even on overcast or rainy days.

"It's coming together well," said Perry, who hopes to have the array installed and working by the end of the year. "It'll be exciting to turn it on," he added.