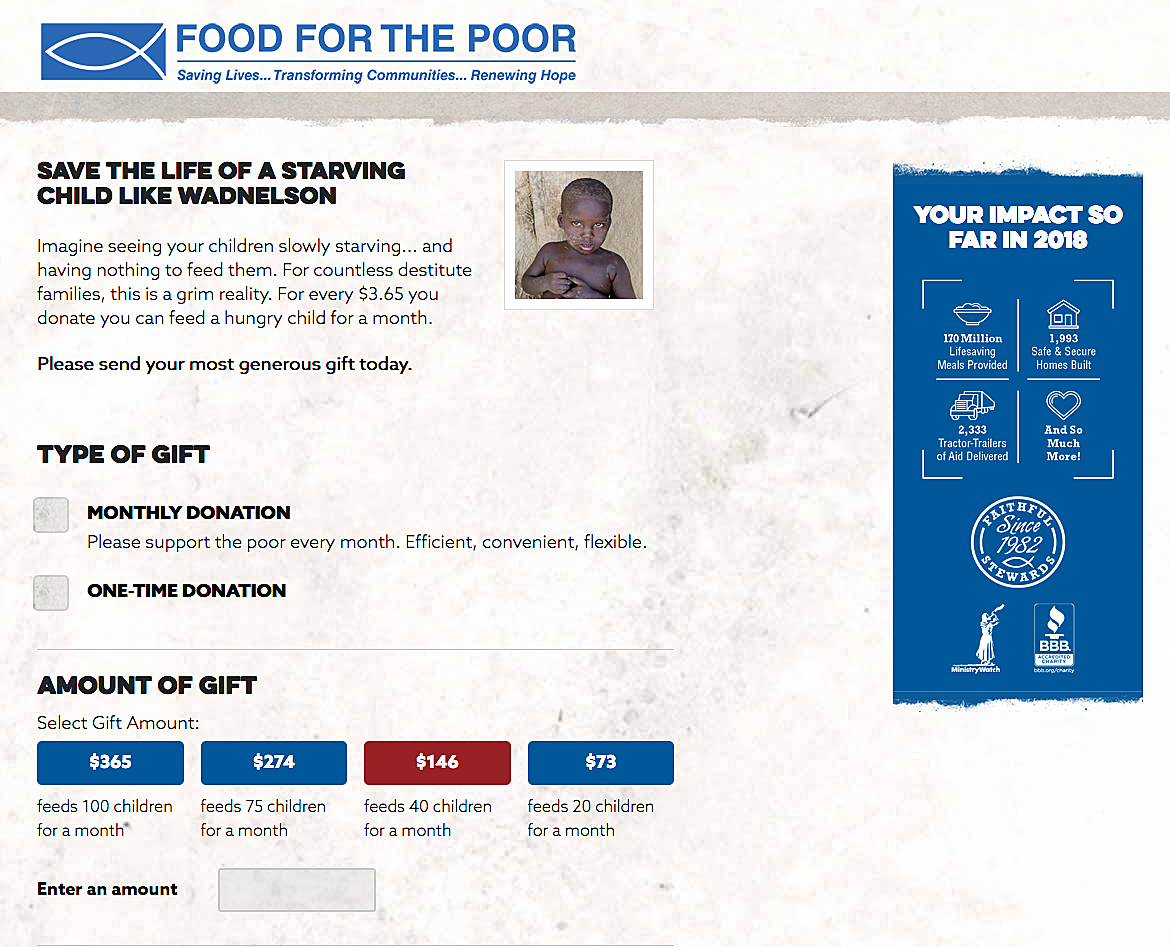 Screenshot of the website www.foodforthepoor.org. California Attorney General Xavier Becerra has taken action aimed at revoking the charity status of Food for the Poor over what he says is its "unfair, deceptive" use of some donations. The agency has appealed. (CNS photo/www.foodforthepoor.org)

The attorney general of California intends to revoke the charity registration in his state for Food for the Poor, a Florida-based Christian charity that gives food, clothing and medicine to aid the poor in Central and South American countries.

Attorney General Xavier Becerra has ordered Food for the Poor to "cease and desist" from using a statement about the percentage of donations that go to direct aid. Becerra has called the statement "unfair and deceptive."

Called the "95% Statement," it says that over 95 percent of all donations to Food for the Poor go directly to programs, and less than 5 percent go to fundraising and administrative costs.

According to Becerra's order, Food for the Poor also has inflated the value of medicinal donations it has received by using U.S. market prices to value the pharmaceuticals.

Food for the Poor has appealed the decision.

"Food for the Poor upholds the highest standards of integrity and honesty, and is exploring all available options in relation to the partial 'cease and desist' order," Angel Aloma, Food for the Poor's executive director, said in a statement sent to Catholic News Service July 31. "We have done nothing wrong and we have filed an appeal in response to the attorney general's allegations."

This practice violates generally accepted accounting principles, which California law requires charities operating in that state to follow. It also led to Food for the Poor reporting both inflated revenue and program expense figures, according to the attorney general.

Increasing the claimed value of the pharmaceutical donations enabled Food for the Poor to suggest that less of their donations as a percentage went to administrative and fundraising costs than was accurate, Becerra said.

His order claims that the "95% Statement" also was misleading because it failed to distinguish between cash and noncash donations. The noncash donations, by definition, could not be used to pay fundraising or administrative costs, and so those costs were paid entirely with cash donations. In recent years, Food for the Poor has only used about two-thirds of cash donations on direct aid, so the 95 percent figure is misleading, according to the order.

Based in Coconut Creek, Florida, Food for the Poor estimates that since its founding in 1982, it has distributed more than $12 billion worth of food, medicine, housing materials, water and other aid to the poor of the Caribbean and Latin America.

Food for the Poor has advertised with National Catholic Reporter, online and in the print newspaper.