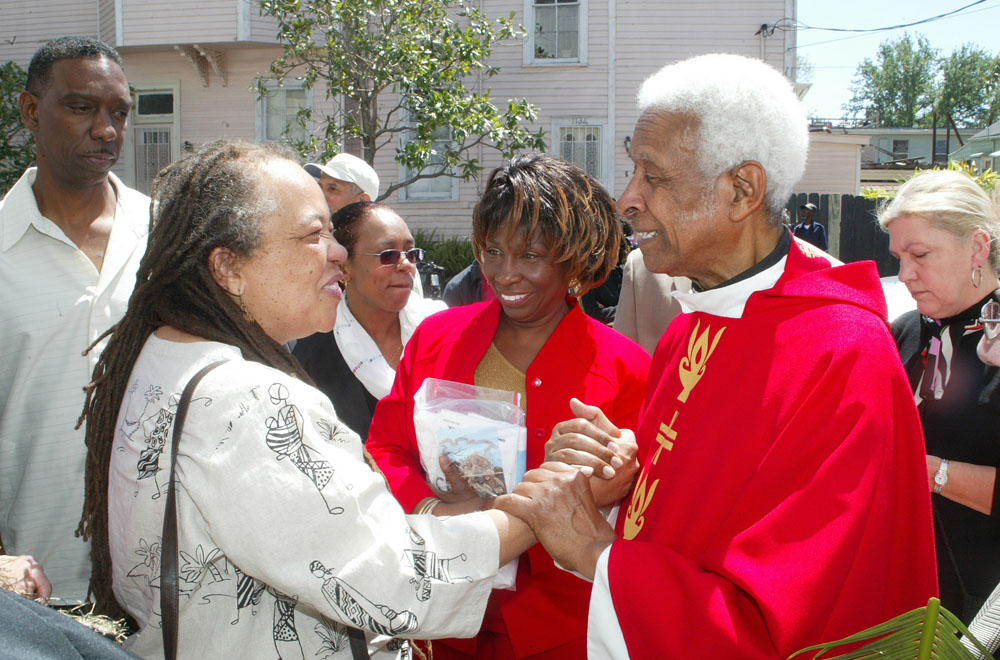 Fr. Jerome LeDoux, 88, one of New Orleans' most popular priests, died Jan. 7 in Lafayette, Louisiana, after surgery for a double heart bypass.

He had for several years been living in active retirement at Holy Ghost Parish in the Cajun town of Opelousas, making periodic visits to the Crescent City.

A slender figure with close-cropped silver hair and a buoyant smile, LeDoux had been a longtime columnist for the black Louisiana Weekly newspaper, sent essays by email to a list of friends, and in 2011 published War of the Pews, a historical novel chronicling St. Augustine, the New Orleans church he pastored for sixteen years.

Founded in 1842 by free persons of color, Italians and enslaved people, St. Augustine is a landmark in Tremé, a neighborhood that is today synonymous with the city's African-American folkways, a hotbed of brass band parades and jazz funerals.

A vegan who used a blender to make his carrot juice, LeDoux wore dashiki vestments and gave flowing sermons that sparkled with wit and hope. He welcomed jazz musicians to perform at Sunday Mass with gospel choirs that drew tour buses with visitors from around the country and the world.

Before his departure from the parish in 2006, homeless people and addicts often knocked on the rectory door all hours of the night. From his shambling residence, filled with newspapers and books, LeDoux gave out food, but rarely dollars, and directed people to shelters.

He regularly said funerals for any family, regardless of faith or their ability to pay. One Palm Sunday he rode a donkey to the church, according to the New Orleans Advocate obituary by Katy Reckdahl.

"Why do we welcome Mardi Gras Indians?" LeDoux said on another Sunday, as members of the black parading tradition sat in the pews, some in feathered outfits, dripping light.

"Feathers, tambourines, war whoops. Mmm: we hear whoops of peace this fine morn. Scripture tells us, 'Make a joyful noise unto the Lord.' " He smiled. "And that, my dear people, is what we now must do!"

Born in Lake Charles, Louisiana, in 1930, he began religious studies at age 13 in Bay St. Louis, Mississippi, at the complex of the Society of the Divine Word, "the only seminary in the nation that trained African-American men for the priesthood," wrote Reckdahl.

Ordained in 1957, he studied for several years in Rome, earning a canon law degree and master's in theology. Back in New Orleans he taught theology for several years at Xavier University, and after serving at several churches, became pastor of St. Augustine in 1990.

Tremé was beset with both drug violence and the early phases of gentrification for much of his time there, as historic structures drew adventurous preservationists to live in a hub of popular music. St. Augustine, with its colonial belfry and large parish center behind the church, had a massive yard for parking and parish fairs. The church occupied nearly a city block in an area that some developers had their eyes on before the devastating flood that followed Hurricane Katrina in 2005.

In establishing St. Augustine as a welcoming space to people of various faiths, LeDoux also oversaw erection of the Tomb of the Unknown Slave, a large anchor draped in chains, in a garden next to the church.

Soon after the hurricane, with more than half of the 454,845 population yet to return — 80 percent of New Orleans had flooded, an area seven times that of Manhattan Island — Archbishop Alfred Hughes decided to close St. Augustine. The announcement provoked an uproar in the neighborhood, including a tense sit-in by demonstrators in the pews when the archdiocese sent a neighboring pastor, the late Fr. Michael Jacques, to take LeDoux's place. Jacques, on beginning his sermon, faced protestors standing in pews, turning their backs to him, as others waved signs and began yelling. At the order of a church official, NOPD detectives hustled Jacques from the altar outside and into a car. The scene was captured in a documentary "Shake the Devil Off," made by Swiss producers who portrayed LeDoux, accurately, as a sacrificial figure to the archdiocese's plan.

Political activist Jacques Morial, the son of the city's first African-American mayor and brother of its third, was a parishioner involved in negotiations with the archdiocese, hoping to keep LeDoux and get the parish revived. As he told me in an interview for Render unto Rome: The Secret Life of Money in the Catholic Church:

"When you negotiate in a tense situation, you assume the people sitting across from you have good information and a reasonable sense of how to proceed. Hughes would not get directly involved. Father Jacques was in way over his head; he had his plan to close parishes and no idea how to achieve it."

Another parishioner, hotelier Michael Valentino, from a family with a history of Catholic philanthropy, offered a substantial donation to support Morial's proposal. St. Augustine needed renovation and was $226,000 in arrears to the archdiocese, a not uncommon status in cities where old churches sat in neighborhoods that had seen demographic changes. Many Sicilians and upper-income Creoles had left in the 1980s for safer neighborhoods.

"If I were a neutral consultant, first thing, you look at the facts," continued Moral. "A pastor everyone loves. Yeah, the guy drinks carrot juice. LeDoux's eccentric. New Orleans is eccentric. But the city's in the national media every day because of Katrina. The parish owes two hundred grand plus some change to the archdiocese. So what do you do? Launch a national fundraising campaign! Call Oprah … rally people who love New Orleans to help. We knew LeDoux would be essential for fundraising — he's a folk hero. Jacques wanted to pastor the two congregations. Hughes, from all I could tell, never thought about an alternative plan."

But Hughes was adamant that LeDoux had to go. "I will do as you say," LeDoux had told him in an earlier conversation, "but you will not change any minds and you have not changed mine."

Obedient to the archbishop, LeDoux left to become a pastor near Ft. Worth, eventually making his way back to Opelousas, with periodic visits to New Orleans. Michael Valentino withdrew the financial offer. A new pastor arrived and though St. Augustine survived, it never saw the major renovation that a national fundraiser would have achieved.

LeDoux had reason to be bitter but didn't show it. Hughes, who had been battered by media coverage over 2002 clergy abuse cases, retired several years later, trailed by a second disaster in his handling of parish closures.

LeDoux sent an email to his online readership announcing the double bypass surgery. In a subsequent edition of "Reflections on Life," he wrote on Dec. 10:

"Yet, for all the grandiose secular celebrations, lavish parties, foods and drinks the world over, Christmas is the one foundational Christian event that triggers the sequence and story of all other spiritual celebrations during the liturgical year. … The lesson of Christmas is to give and to be the gift that keeps on giving throughout the year just as Jesus was and is the gift of all time. …

"Christmas shows us the celebratory and joyous side of the great birthday. This part of the meditation and celebration is wonderful, but it leaves us with nostalgia and the holiday blues over Christmases past when we had so many of our parents, grandparents, aunts, uncles and other kith and kin still living and celebrating with us. This is part of that marvelous vision of the Communion of Saints, among whom are our ancestors who have gone home to God. So Christmas also celebrates the Communion of Saints. … Christmas seizes death, resurrection, eternal life."

[Jason Berry is the author most recently of City of a Million Dreams: A History of New Orleans at Year 300.]