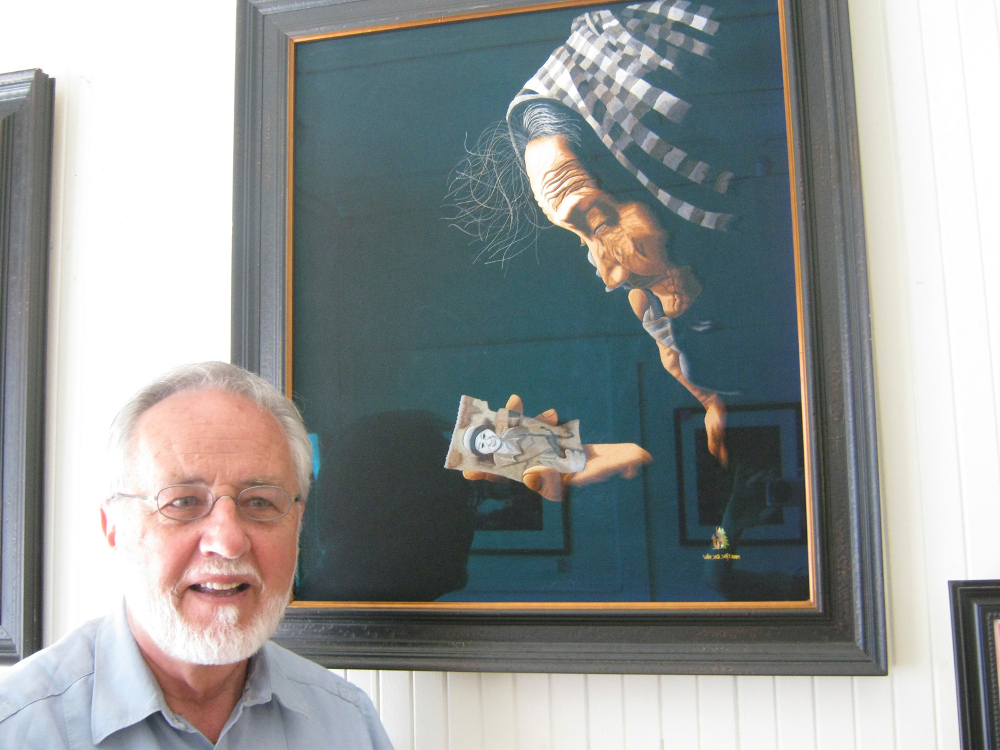 The intriguing thing about a symbol is how many ways it works. The graceful bridges in the logo of Bridging Hope symbolize relationships between:

Some bridges are hard to negotiate, but this ministry is a significant start. Many feel overwhelmed by world poverty, yet finding a direct, trustworthy way to alleviate it is the first step on the bridge. Even one small, practical action restores hope.

Unsurprisingly, a bridge plays a key role in the story of Franciscan Sr. Sen Nguyen. On April 23, 1975, as Saigon was collapsing and refugees were flooding south, she was distressed by the corpses of children lining the beach in her village south of the capitol. Telling her mother, "Wait here!" she left to seek help from the Red Cross in Saigon. She didn't know that social services had closed during the crisis. When the bridge connecting her village to the city was bombed out; her return home was delayed. Finally reaching the village, she could not find her mother, her only living relative.

Alone at 17, Nguyen was distraught for several months. Then, in what she calls "the miracle," a letter arrived from her mother, who had fled to the U.S. Since no mail was delivered between the two countries at the time, its arrival was remarkable. That launched Nguyen's journey -- without money -- to a reunion in Denver. "God brought me here through the water," she says with misty eyes. Her migration solved another dilemma: Her duty to her mother conflicted with her desire for religious life. In Vietnam, the custom then was to leave family completely. In the U.S., she could both become a Franciscan sister and care for her mom.

Yet living comfortably in the U.S. did not cloud the images of her people suffering the effects of war and poverty. When travel was again allowed to Vietnam in 1991, Nguyen returned to reestablish connections. She witnessed children living on the streets, begging for food, and young women forced into prostitution simply to survive. Bridging Hope was her response.

After her student years at Regis University in Denver, Nguyen had stayed in contact with her professor of religious studies and advisor, John Kane. Eventually, he became chair of the nonprofit's board and she received the Jesuit university's Humanitarian Award. The ministry they now lead has a four-pronged goal: raising funds for charitable programs in Vietnam, partnering with both international charities and Vietnamese benefactors, fostering awareness of the unjust living conditions of Vietnamese women and children, and increasing appreciation for the vitality and richness of Vietnamese arts and culture.

Kane visited Vietnam in 2010 to see firsthand the ministries sponsored there. He speaks modestly of their work (in 2011, nutrition, teacher salaries and student tuition for one school; nutrition for 40 mothers; breakfast for 360 children; and a shelter for elderly women). "We are not doing 'world changing' work," he said, "but we're doing what we can -- and real hope is built not of great dreams and visions, but of the little steps of people helping each other, whether across rooms or streets, or across oceans."

Among the projects Bridging Hope supports is a network of shelters and facilities for women and children with HIV/AIDS, a day-care center for working parents, and Phu Long School's Undernutrition Relief Program in the Mekong Delta. Even though the school is free of charge, the dropout rate is still relatively high, not only because of lack of funds for school supplies and uniforms or the long distance to walk to school, but because of undernourishment as well. Bridging Hope is also fundraising to support homeless elderly women in Da Nang and to build a shelter somewhere in the south. The traditional Confucian family structure is starting to fray, forcing vulnerable older women into the streets.

Nguyen visits twice a year, and hopes to stay longer each time. Bridging Hope does 90 percent of its work directly with parishes or religious communities in Vietnam. A Vietnamese doctor donated land for one orphanage; they receive almost no government funding.

Their gallery on Tennyson Street in north Denver displays remarkable art, created with detailed embroidery. The technique was refined by the French and taught by the Daughters of Charity. Most hand-embroidery has been done by polio victims, but its intensity leads to arthritis and eye strain. With these problems compounded by competition from less expensive machine stitchery, the craft may become a dying art. Another line, begun with tablecloths and pillow cases, has now expanded to silk purses, scarves and appliquÈd clothing.

A creative blend of cultures sponsors various fundraising efforts such as art auctions and the Lunar Moon Festival organized by the Asian Student Association at Regis University. The primary fundraiser, Oct. 6 at St. Joan of Arc Parish, is an evening of Vietnamese food, dance, song and art. The University of Colorado's Vietnamese Student Association serves and cleans up. A dance group and choir from a Vietnamese youth group entertain. Food and cooking are donated, so overhead is low.

Under the Bridging Hope umbrella falls "Christmas for Breakfast." It began when a Vietnamese pharmacist in California asked children in her extended family to forego one Christmas present and donate its cost to a Vietnamese orphan. Expanded and matched by corporate funds, it's grown to $50,000, buying breakfast for more than 300 children a year in orphanages.

Nguyen serves as a conduit for such gifts. She and Kane have no master plan, simply participating as people connect and projects unfold. Bridging Hope may be on to something here. When Jesus entered borderlands, important things happened. So too this bridge between cultures creates a rich and fruitful mix.

[Kathy Coffey is author of God in the Moment: Making Every Day a Prayer and Hidden Women of the Gospels (Orbis).]

A version of this story appeared in the Sept 28-Oct 10, 2012 print issue under the headline: Hope fostered in small, practical actions.