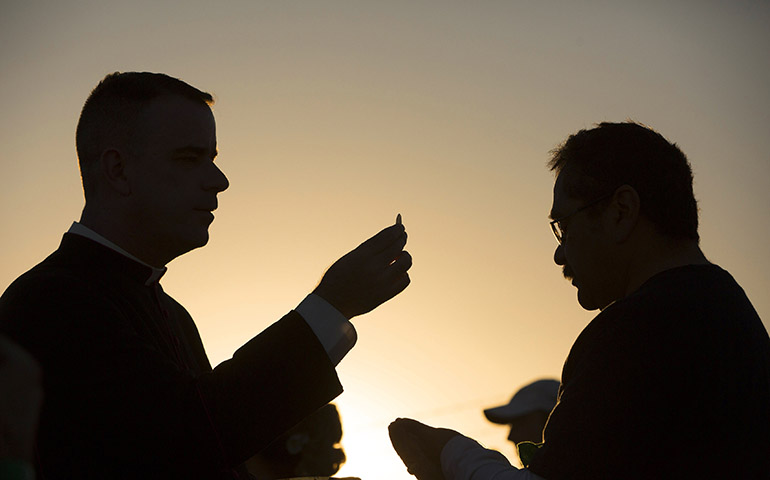 Msgr. J. Brian Bransfield gives Communion to a man attending Mass on the U.S. side of the border in El Paso, Texas, Feb. 17. (CNS/Nancy Wiechec)

While hundreds of thousands gathered for the papal mass Feb. 17 on the Juárez, Mexico, side of the border, roughly 550 people that the El Paso diocese called "Pope Francis' VIPs" -- including immigrants, activists, students and religious -- awaited a blessing from the opposite side of the fence.

"Se ve, se siente – el papa está presente!" the crowd chanted ("It's seen, it's felt; the pope is present"), which eventually morphed into a collective scream as the pope arrived at the platform where he would have a moment of silent prayer and wave to the animated crowd about a football field away.

Those in attendance said the experience was unforgettable and that they felt fortunate to be one of the few with the opportunity to see the pope. But his words, more importantly, left an impression on the crowd, primarily his call for a conversion of mercy toward migrants.

"I think that's a good understanding of what we need in American politics toward immigration," said Chris Hale, executive director of Catholics in Alliance for the Common Good -- a nonprofit that works with politicians on Catholic outreach. "We need to be converted on this issue, and the only way people are converted, Pope Francis said, is by encountering those who are excluded. What we need to do as Catholics, as well as the American people, is make sure to have experiences with migrants and immigrants, because that's the only way we're going to change people's hearts."

"And we have to acknowledge that this didn't get nearly the media coverage of his September visit [to the U.S.], so we as Catholics have to be the messengers of this," he said.

Ruben García, who attended the Mass on the El Paso side, is one person who constantly encounters immigrants and refugees who arrive in the U.S.; he is the director of the Annunciation House, which has several "houses of hospitality," or shelters, and in its 38 years of operation, has seen about 145,000 people pass through.

Mid-interview with NCR, Garcia had to take a phone call:

"Sorry, that was ACLU [American Civil Liberties Union] in Las Cruces," he said after hanging up. "They found a 20-year-old abandoned in the desert and were letting me know that they're bringing him to one of our houses."

"See, for that kid," he continued, "it's like he feels that no one's with him, and now the pope comes to say, 'I am with you.' What these people hold on to is faith and hope, so the pope's presence feeds into that faith and that hope, so they feel like they still have options."

García said that one concern he has regarding the repercussions of the pope's visit, is the temptation for the community to "use the papal visit to kind of sanitize the situation, to say, 'See? Everything's great!' but that's not why he's coming."

García continued, "He's coming to say, 'there are a lot of people who are suffering, and I want them to know that I am with you, and for those of you who are responsible for the care of those people, you're failing. You’re not protecting them. You're not being just. You're not putting in place the procedures and policies that respect the dignity of the poor, of the refugee.'"

Another group on the levee as part of "Francis' VIPs" included students from New Mexico State University in Las Cruces, who are in the university's migrant farm worker program, meaning their parents work in the fields.

"A lot of people take farm workers for granted," said Brigette Esparza, a junior whose father is from El Paso but works alongside migrants in the farms. She, too, had to work in an onion shed while her father was in the fields out in the sun.

"They don't appreciate what they do, like how things are done and how hard they work out in the sun all day and night," Esparza said. "So it's really cool that the pope gets it and knows what's going on, unlike other people who buy their food and produce without knowing what goes on behind it."

Another student, Oralia Serrano -- a freshman and first-generation university student, whose parents migrated from Mexico -- talked about the significance of this day to her.

"This is an amazing opportunity, and it really feels like Pope Francis is talking to us and our families, even though he's kind of far away," she said, joking that her seat was farther away than she expected.

For some in attendance, this wasn't their first encounter with the pope: Missionaries of Jesus Sr. Norma Pimentel is the executive director of Catholic Charities of the Rio Grande Valley and met Francis during his September visit. There, he recognized her during the ABC “20/20” papal virtual audience for her response to the vast numbers of women and child refugees on the Texas border in 2014.

She said that while the September encounter and the one on Feb. 17 were totally different, this encounter "felt like a follow-up to that wonderful moment we had before, because it's gone beyond us and the work [Catholic Charities does]. It's two countries coming together, and it's his presence that is bringing us together as countries of faith."

"He's speaking into our hearts and telling us not to forget that all the individual people who come through here, many of whom lost their lives. ... He deliberately made sure he came to the border, and the people here do feel that," Pimentel said.

García emphasized that same point, saying it's important that people understand that the pope's message is not exclusively for bishops and government officials.

"He's reminding us, the policies that your governments are carrying out, they're carrying out because that's what they think you people want."

Hale added that, though the tail-end visits from September and Wednesday are "a needed boost to an election that has been highlighted by small things," his visit alone won't change the current political rhetoric in the U.S. "It's up to the American people to do that."

"The most important image we saw today was Pope Francis through a fence: that image alone communicates so much. This is a man who wants to take away things that divide us, and what we have to do is really highlight the idea that we don't build walls -- we build bridges. ... And that doesn't just go for immigration, but also every social issue the Catholic church cares about."

While everybody seemed aware of the symbolism behind the pope choosing to bookend his trip at the borders, one person brought a different perspective, noting the positive geopolitical consequences this visit could have.

Patrick Schaefer is a professor at the University of Texas-El Paso and also runs the Hunt Institute, which studies structures and customs in the trans-boundary region (El Paso, Las Cruces and Juárez) and uses that information to figure out how best advocates can "build bridges."

"He's coming here because many of the issues they're dealing with as a region strike at the heart of the relationship with human rights, environment, energy, the relationship between capital and labor, organized crime, violence. … All of those things have consequences of international trade, and all those externalities, we have to deal with as a border region," Schaefer said.

"Everything we're dealing with [on the border] has reverberations and manifestations around the whole world. So the way we can leverage or benefit from the pope's visit is by engaging with stakeholders and policymakers around the world to let them know that we are the heart of all these issues, and let them know that we should have a stronger voice when decisions are made that affect us," he continued.

"I think that him being here can really strengthen our voice as a community."