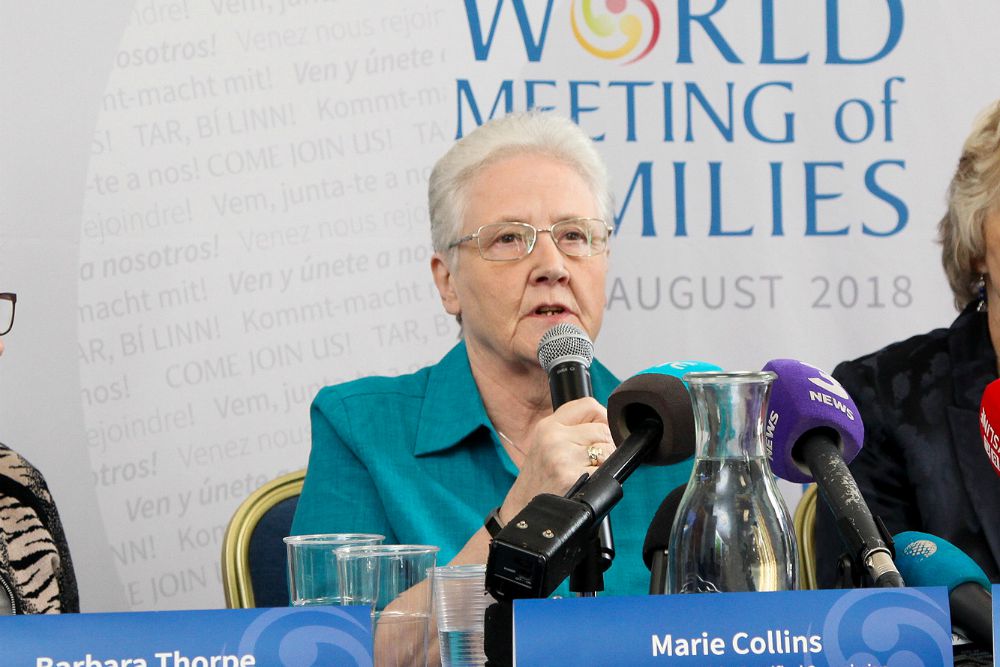 Along with seven other survivors I met with Pope Francis Aug. 25, at which time I asked him why the central Vatican Accountability Tribunal announced in 2015 was not being implemented.

In reply to me, he spoke of his belief that for cultural reasons such a tribunal was "not viable." He referenced his 2016 moto proprio "As A Loving Mother" at this time and later in his press conference Aug 26 on the plane home to Rome, rather than the tribunal.

On the plane he expressed the belief that I was a "bit fixated" and did not "understand" the process being used now. I have no problem in admitting to being determined to see those who protect perpetrators held accountable (though "fixated" is not how I would describe myself!)

The priest who abused me was exposed as a perpetrator to his bishop soon afterwards, but the bishop did nothing, and the priest went on to sexually assault little girls in his parishes for the next 30 years — hence my determination that perpetrators not be protected.

I do understand the alternative option Francis has chosen over a centralized one. The statement in regard to my lack of understanding is reminiscent to me of Cardinal Gerhard Müller, who after my resignation from the Pontifical Commission for the Protection of Minors in 2017 also said I did not "understand." I did in that case too.

Francis clearly now favors separate or local courts to hold bishops accountable, but I wonder: What has changed his mind since 2015? At that time a central Vatican Accountability Tribunal was recommended to him by his Commission for the Protection of Minors. This recommendation for a central tribunal was approved by every member of the Commission, experts he had chosen from differing cultural backgrounds to advise him.

On June 10, 2015, it was announced by the Council of Cardinals that the pope was in agreement with this recommendation and he would provide any funding or personnel needed to implement it. Later, it was reported to the Commission by a member close to the Congregation for the Doctrine of the Faith that it had been blocked by them and, as we know, it was never implemented.

Pope Francis has not explained why he accepted a central tribunal in 2015 but now feels it "is not possible." Who or what has caused him to change his mind?

The pope's main reason for different judges for different bishops, as expressed during the press conference, is because of the "different cultures of bishops who must be judged." This I freely admit I do not understand. The Catholic Church should have a universal standard to which all leaders are held.

If in some cultures practices are acceptable that are not approved in international law or in the church's own canon law — rather than lower its standards to suit the culture, surely the church should be ensuring they do the opposite and become a front-runner in changing that culture in order to protect the vulnerable. All children should be cherished equally.

Speaking at the press conference in the context of an accountability question, Francis referred to the finding against Guam Archbishop Anthony Apuron as the last time this system was used. I believe this case was one of a perpetrator of abuse and so this is not an accountability issue. Why the confusion?

The pope speaks of the reason for not having a central tribunal as being that for some bishops "leaving their dioceses ... is not possible." If it is a true impossibility, then could an exception not be made by any Vatican Tribunal to have a local hearing in that particular case?

In speaking of his process in using "As A Loving Mother," the pope said "many bishops have been judged this way." Have they all been found not guilty? Or if there have been findings of guilt, why have these not been made public?

If all is in place and bishops are being held accountable behind the scenes then why, in his recent letter to the People of God, does Francis refer to efforts "to come up with" and delay in "applying" the "actions and sanctions that are so necessary"?

At his press conference, the pope expressed an intention to meet with me when I am in Rome and explain how the new accountability process under his moto proprio is working. Due to pressure of time on Aug. 25 we were not able to discuss the issues at length, so I would appreciate that opportunity. I believe a number of the above questions would be important to ask, and then have explained, in order to bring clarity on the issue of accountability.

I will be in Rome from Sept. 9-14 on a private visit and would very much like to meet with Francis to understand better the answers to these questions. If this is not possible, I do hope he will make a statement to the faithful covering these issues and stating clearly what is being done as so many are hurting at what is happening in their church today.

[Marie Collins is a former member of the Pontifical Commission for the Protection of Minors and an Irish survivor of clergy sexual abuse.]