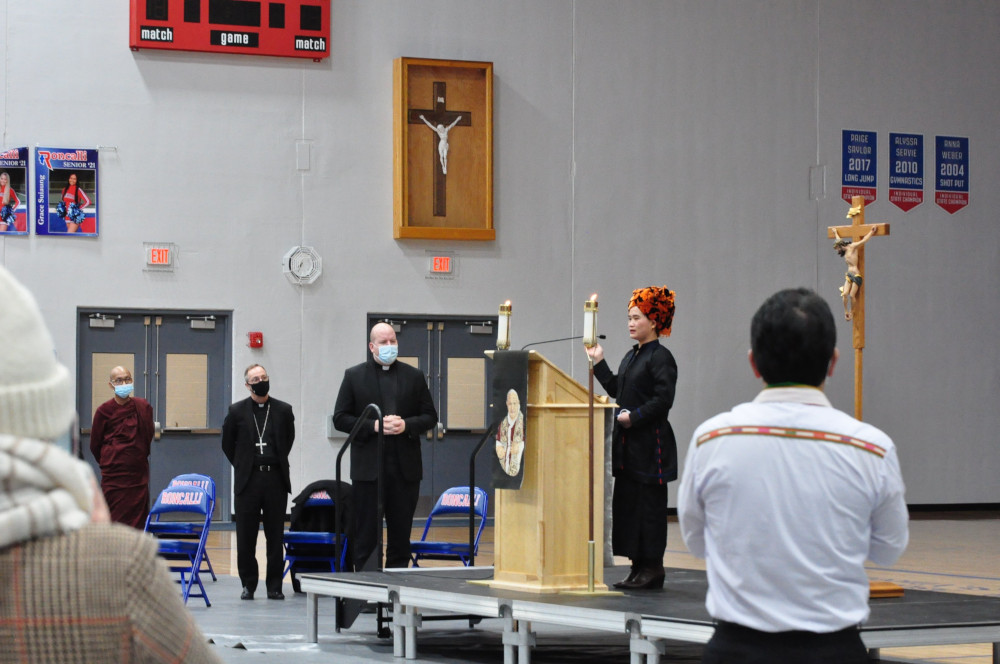 On Feb. 1, Myanmar refugee and Indianapolis resident Paul Hnin scrolled through news articles online when a headline seized him with shock and fear: The Myanmar military had overthrown the country's democratic government.

"I couldn't think," said the 37-year-old member of St. Barnabas Parish in Indianapolis. "We don't want to go through this again. We need democracy!"

With 24,000 refugees from Myanmar — formerly known as Burma — Indianapolis is home to one of the nation's largest Burmese communities.

A large number of them are Catholic. Those of various ethnic groups settled near three Indianapolis parishes: the Hakha Chin at St. Barnabas, the Zomi Chin at St. Mark the Evangelist, and the Karenni at St. Pius X.

In support of the city's Burmese population following the coup, the three faith communities hosted a prayer service Feb. 11 at Roncalli High School in Indianapolis.

"Along with praying for the situation, we hope to raise awareness by doing this so people know what is going on in Myanmar," he said. "And to allow for a show of solidarity with the Burmese who have made Indianapolis their home and enriched our community by being here."

The various traditional outfits of those gathered from numerous Burmese ethnic groups turned Roncalli's auxiliary gym into a prism of color.

Those not from Myanmar turned out for the prayer service as well, including Rusty Albertson, the St. Mark Catholic School principal.

"We have 250 Burmese students in our school," he said. "What happened in Myanmar with the coup and with so many of our families still having family there — bringing the community together to pray and show our support is the right thing to do."

St. Barnabas parochial vicar Fr. Eustace Thang noted the gathering's diversity in his welcome address. "I see people here from many worlds, and it is good to see you all," said the priest, who was sent by the Hakha Diocese in Myanmar to minister to the parish's Hakha Chin refugees.

"We thank you for your participation and prayers, and for standing in solidarity with us and especially with the people in Myanmar. We continue to pray to God for peace and democracy throughout our homeland."

He encouraged those present and watching online to "not be discouraged if we have not yet received an answer from God. ... We must never give up until we get what we ask of the Lord. The time will come. God is never late."

Among the speakers was Sayadaw Ashin U Win Ma La, a local Buddhist monk and Burmese refugee who spent 11 years in a Burmese prison. He said he was imprisoned because he "protected and fought for the democracy that the people of Myanmar want." 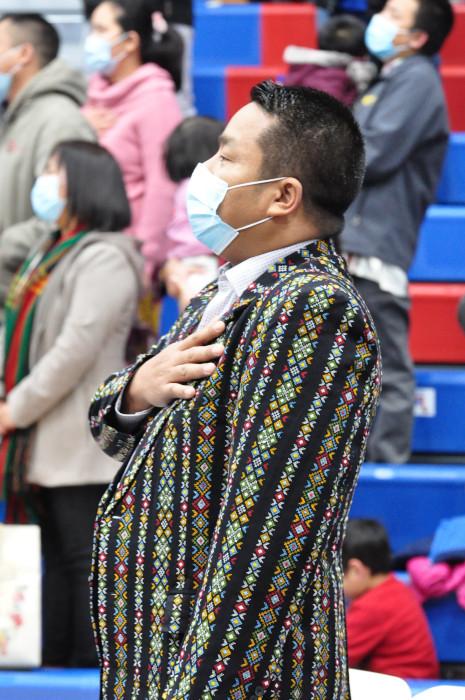 "We will not stop fighting until we get the democracy that we want," he added.

Indianapolis Archbishop Charles C. Thompson, who also spoke at the service, expressed his sympathy for the Burmese refugee community, saying: "Our hearts are with you. Our prayers are with you."

"I know the circumstances that brought you here were not the greatest," he said, thanking them for the witness and blessing they "here in the midst of your troubles and sorrows."

He said another priest from Myanmar was "just days away" from coming to Indianapolis when the coup happened and was not able to get out.

"So, we see before us a sign of hope, a sign of life, a sign of assurance that God is with your family, your friends and with you — in Myanmar, in Indianapolis and around the world," he said.

Yan Yan, a 22-year-old refugee and a St. Mark parishioner, said the archbishop's presence at the service was "so awesome."

"The service tonight really made me feel supported, especially having the archbishop here," he said. "At times, I was almost brought to tears," he told The Criterion, archdiocesan newspaper of Indianapolis.

Hnin, who read a petition during the prayer service, said he also was moved by the service and the show of support, but he is still anxious for his family and friends in Myanmar.

But the people of Myanmar are not standing idly by. Since the coup, massive peaceful protests have taken place in the country's larger cities, as reported in news outlets around the world.

Joseph Kung Za Hmung, publisher and editor-in-chief of GloriaNews.com, a Catholic media outlet in Myanmar, said in an email that the protesters are 80% young people — both Catholics and non-Catholics between ages 15 to 25.

They are protesting, he said, because under military rule "we will be oppressed and persecuted with authoritarian laws, and our developing country will be in a miserable situation again. The country will be corrupted. Religious freedom will be torn apart, and freedom and human rights (will) be extinguished."

When asked what Catholics of central and southern Indiana can do to support the Myanmar people, Za Hmung said they should "not only pray for us but they should lobby their governments to put economic sanctions and other political pressures on the Myanmar military."

She encouraged Catholics to contact their senators to express support for the sanctions and for holding Myanmar officials accountable.

"Although it is far away, attacks on democracy or abuses of power should concern all of us who care about freedom and justice," she said.

Hoefer is a staff writer at The Criterion, newspaper of the Archdiocese of Indianapolis.