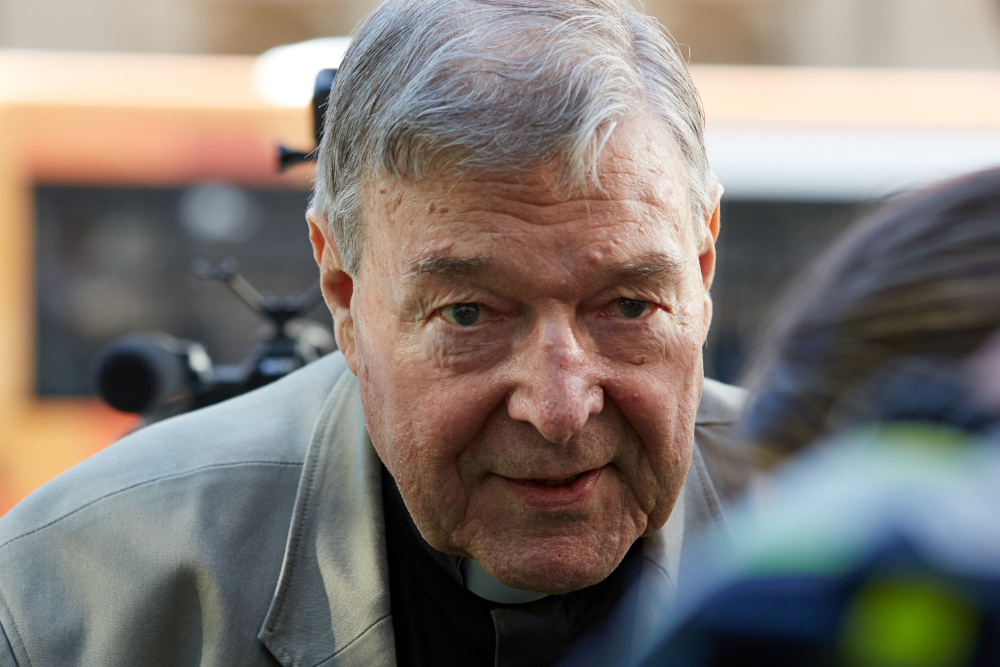 Cardinal George Pell, 77, was sentenced to six years in prison March 13, just over two weeks after a Melbourne court allowed the publication of news that he had been found guilty of sexually abusing two boys.

Pell, who continues to maintain his innocence, will try to appeal the verdict. The court has set June 5-6 as the dates to consider the basis for the appeal.

In December, a jury had found him guilty on five charges, each of which carried a maximum jail term of 10 years.

The jury unanimously found that Pell, shortly after being named archbishop of Melbourne in 1996, sexually assaulted two choirboys in the sacristy of Melbourne's St. Patrick's Cathedral. The guilty verdict regarded one count of "sexual penetration," in this case oral sex, and four counts of indecent acts with or in the presence of a minor under 16 years of age.

Judge Peter Kidd spent more than one hour explaining the reasoning behind his sentencing and the factors he considered. He repeatedly referred to the cardinal's position of authority over the choirboys and the breach of trust his actions caused.

"You were a pillar of St. Patrick's Cathedral by virtue of your position," Kidd told the cardinal.

"The brazenness of your conduct is indicative of your power over the victims," he said.

The judge also said he had to consider the cardinal's age and health problems, including noting that the stress of imprisonment would exacerbate his hypertension and heart condition.

He said he realized that "each year you spend in custody" would represent a large portion of the remainder of his life.

"You may not live to be released from prison," he said.

The judge said he did not consider Pell a risk to offend again and noted that it had been more than 20 years since the incidents in the trial. He also referred to character references he had received.

However, he ordered the cardinal to register as a sex offender and told him he would remain on that registry the rest of his life.

The cardinal will be eligible for parole after three years and eight months.

The verdict in this case was withheld from the public while Pell was awaiting trial on other abuse allegations, but when prosecutors decided not to go forward with the second case, a judge lifted the ban on publishing the verdict Feb. 25.

The cardinal's legal team has lodged an appeal that will be heard by the Victorian Supreme Court (Appeal Division) on three grounds. The first is that the conviction by a 12-person jury is "unreasonable" because it relied on the "word of one complainant alone."

"The verdicts are unreasonable and cannot be supported, having regard to the evidence," the appeal says.

"On the whole evidence, including unchallenged exculpatory evidence from more than 20 crown witnesses, it was not open to the jury to be satisfied beyond reasonable doubt on the word of the complainant alone."

On this ground, the three appeals judges can overturn and expunge Pell's conviction and set him free.

The second ground for appeal is a complaint from his defense team that it was stopped from using a visual aid it wanted to use to show it was impossible for the sexual activities to have taken place in the back rooms of the cathedral.

A final ground is that there was a "fundamental irregularity" by the judge that saw Pell not physically enter a not-guilty-plea in front of the jury. Lawyers said this was likely because he had done so in a previous trial where the jury was dismissed after being unable to reach a verdict, and the judge advised the new jury of the cardinal's plea.

On the last two grounds — which are of legal error — the appeals judge can overturn the verdict but must order a fresh trial.

The Australian cardinal took a leave of absence from his post as prefect of the Vatican Secretariat for the Economy in June 2017 to return to Australia to face the charges. The cardinal's five-year term as head of the secretariat expired Feb. 24.

On Feb. 27, just after the verdict was published and Pell was taken to jail, the Congregation for the Doctrine of the Faith announced that it was beginning a canonical investigation of the cardinal. The congregation handles the church process for allegations of child sexual abuse by members of the clergy.

One of the two victims is now deceased. Ahead of the sentencing, his father, who is now suing Pell, released a lengthy statement.

"On the eve of George Pell's sentencing, my determination to see that man rot in jail is stronger than ever," the statement read in part.

"It will mean that he can no longer hurt any children. It will not bring my son back, but if Pell is in jail forever, he will not be able to destroy any more families the way he destroyed mine.

Apart from the civil suit, Pell could face further legal battles. When he was in Melbourne, the cardinal set up a fund for sexual assault victims, who, when compensated, signed away rights to sue the church. The government in the state of Victoria is considering whether to restore the rights to sue. Other complainants whose allegations did not get as far as a trial could also sue him under Victoria's civil laws.