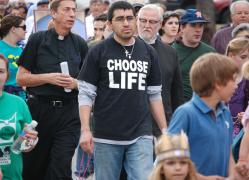 Protesters march in the Pilgrimage for Life in Huntsville, Texas, in late November. (CNS)

WASHINGTON -- As Beth O'Reilly of Manassas, Va., grows larger with child, the Catholic mother of two other young children sees her home budget getting smaller as the economy becomes more unstable.

She is seven months pregnant. She said the prospect of the added expenses that will accompany the arrival of her child has created some anxiety in her household, but her religious convictions prevented her from terminating her pregnancy.

"We're upside down in our mortgage and people all around us are getting laid off from their jobs," O'Reilly said as she pumped gas into her sport utility vehicle during a recent stop at a suburban Maryland station. "If my husband loses his job, we're going to be in real trouble."

It didn't surprise her to learn that abortion clinics across the U.S. were reporting increased traffic in the past several months. She told a Catholic News Service reporter she was convinced the economic meltdown has caused expectant mothers to panic about their finances and how they will be able to afford a new baby right now.

Planned Parenthood clinics in some states reported record-high numbers of abortions in the last half of 2008, following years of a national decline in the numbers.

If abortions are indeed on the rise in the U.S. and that is tied to the economic meltdown, Deirdre McQuade, assistant director for policy and communications in the USCCB Secretariat of Pro-Life Activities, told CNS March 30 that it's more important than ever to inform expectant mothers there is no need to resort to abortion and that assistance is available to them.

Though national private and public organizations that provide abortions don't have up-to-date statistics on abortions, a National Network of Abortion Funds spokeswoman confirmed that calls from women seeking funds for abortions quadrupled in the past year.

"Many of our affiliates have seen an increase in their call volume, and there is anecdotal evidence to suggest that some of this increase is attributable to the economy," said Erin Kate Ryan, communications and development director for the organization that helps women in need pay for abortions.

The main calls were coming from women reporting they had been laid off, had decreased social services or were homeless, Ryan told CNS March 26.

For the past century, U.S. fertility rates have risen and fallen with the economy, said Jessica Arons, director of the Women's Health and Rights Program for the Center for American Progress in Washington.

Two periods in the 20th century when U.S. fertility had dramatic declines were during the Great Depression in the 1930s and the energy crisis of the 1970s, Arons told CNS.

In contrast, the country experienced an enormous baby boom following World War II and again in 2007, both times of great economic prosperity in the U.S., she said.

"When people are deciding if they are going to have another child, their financial situation is often a consideration," Arons said. "When they feel optimistic about their financial situation, they tend to be optimistic about meeting their responsibilities in raising a child. But if they are struggling to make ends meet, they tend to question their abilities in raising another child."

These reports follow a steady decline of U.S. abortions, and in 2007 more babies were born in the country than any other year in the nation's history. Fertility experts said they expect the birthrate to drop this year because of the economic recession.

McQuade told CNS that it was important to get the message out to people that the pro-life movement is not just about convincing women not to have an abortion and then abandoning them, she said.

"It's our job to serve women in their hour of need and to offer them solutions other than abortion," she said. "Adoption is an option. Abortion doesn't solve our problems. Abortion will invite new problems."

On Capitol Hill the Pregnant Women Support Act -- a comprehensive package of federal legislation and policy proposals designed to reduce the number of abortions, introduced in the House by Democratic Rep. Lincoln Davis of Tennessee in January -- appeared to be gaining traction after the bill's previous failure in a previous session of Congress, McQuade said.

Though President Barack Obama supports legal abortion, he has said he wants to work with policymakers and legislators from both parties to find a way to reduce the number of U.S. abortions.

"We must work toward real solutions to the issue of abortion by targeting the underlying factors that often lead women to have abortions," said U.S. Sen. Bob Casey, D-Pa., who introduced the Pregnant Women Support Act in the Senate, also in January.

Lawmakers must "focus on how we can truly help and support women who wish to carry their pregnancies to term and how we can give them and their babies what they really need to begin healthy and productive lives together," he said.