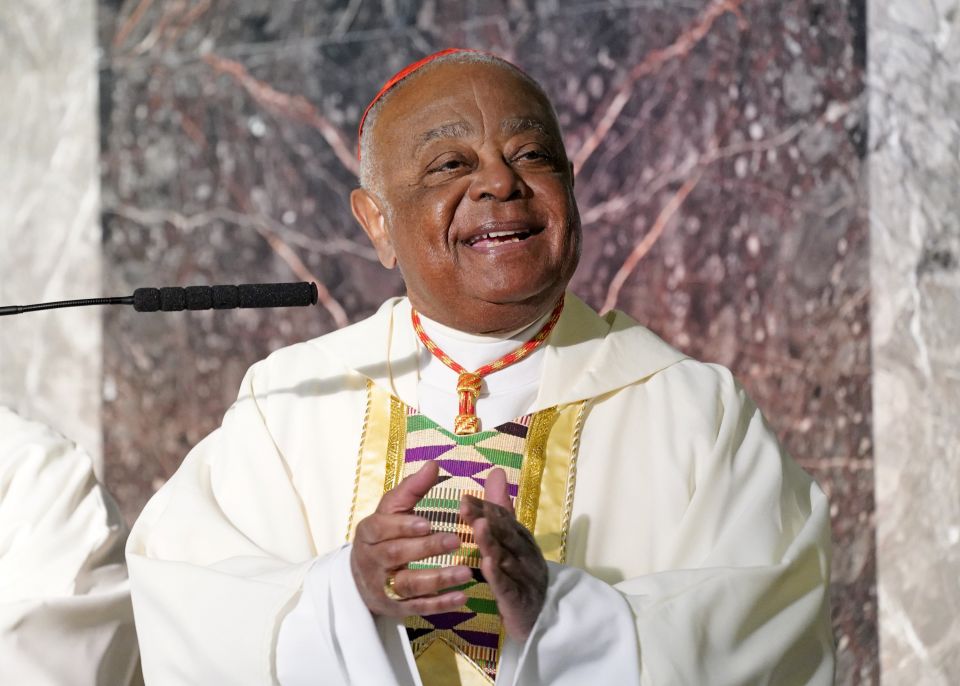 It also is the time to help others see how people of color have contributed and continue to contribute to building up this country, he said.

The cardinal was the principal celebrant at a Mass Feb. 13 at St. Catherine Laboure Church in Harrisburg, Pennsylvania, and a at a Mass Feb. 20 at Immaculate Conception Monastery Church in the Jamaica Estates section of the New York borough of Queens. Both Masses were livestreamed.

"This month is not exclusively a time for African Americans simply to bask in the pride of our heritage — although that is also a benefit of these four weeks," the cardinal said at the Harrisburg Mass.

"It is additionally a moment when all Americans can have a better grasp of our all-inclusive history and spark a hope as a nation for our common future," he said.

He told the faithful gathered in Queens that "Black History Month is an opportunity for our entire country to recognize the blessings that people of color have offered and continue to impart to these United States."

In November 2020, Pope Francis elevated him to the College of Cardinals, making him the first African American cardinal in the history of the U.S. Catholic Church.

At the Pennsylvania Mass, sponsored by the Harrisburg Diocese's Black Catholic Apostolate, Cardinal Gregory told the congregation that observing Black History Month is important because "for too long in the narrating of our nation's history, the talents and contributions of Black people were minimized, ignored or even denied."

The month "is not simply a moment for Black people to recall our achievements or maybe just our survival," he said, "but an opportunity for all Americans to understand that this great nation of ours with all of its gifts and treasures is the result of the gifts of all people — including those who may have arrived on these shores in chains as slaves."

Referring to the day's Gospel reading from Luke, Cardinal Gregory said the beatitudes "challenge us to work for justice for all people — to renounce all forms of racism, antisemitism, Islamophobia, homophobia or intolerance of the religious freedom of other people."

"For those who believe in the beatitudes there can be no place in their hearts for hatred," he said.

Calling the beatitudes "a topsy-turvy way of looking at life," Cardinal Gregory said they remind the faithful that "while the world may not always be fair, God is always just.'

"The beatitudes are designed for people who realize that life may be unfair but that God is always just — even in the face of the many injustices that everyone encounters," the cardinal said. "We African Americans have had to rely on that truth too often throughout the history of our nation as we have had to face of discrimination and bigotry."

The Feb. 20 Mass in Queens was jointly sponsored by the Brooklyn Vicariate for Black Catholic Concerns and the Office of Multicultural Diversity for the Diocese of Rockville Centre, New York. Concelebrants of that Mass included Brooklyn Bishop Robert J. Brennan and Rockville Centre Bishop John O. Barres.

"Today we celebrate in prayer the contributions of Black people to our homeland," Cardinal Gregory told the standing-room-only crowd gathered for the Mass. "However, this is also a moment for all Americans from every culture and race to appreciate the gifts that Black people have offered to our nation."

He said that now is the time "for nation-building and for strengthening the bonds that tie us together as one people."

Referencing the Gospel reading from Luke for the Mass, in which Jesus admonishes his followers to love their enemies and be merciful as God the Father is merciful, Cardinal Gregory said: "There have been too many times and occasions when God's example of compassion and mercy have not been the path chosen by some of God's people."

"Ours has always been an immigrant nation comprised of people from every continent, language background, religion and race. We are asked to fashion and preserve one nation from this wide assortment of humanity," he said. "People of color have not always received the acceptance and honor that our human dignity and cultural contributions to our nation have deserved."

The cardinal lamented that in "this the land of the free and home of the brave, there are too many lessons of disrespect and bigotry."

"Many people fleeing Europe to seek a better life for themselves and their families too often were rudely treated and scorned. Each group would have its own stories of the mistreatment that some of their ancestors endured as they came to these shores," he said. "One's experience of discrimination, therefore, should make people sensitive to the maltreatment of others."

He called on all Americans to "rejoice (during) this African American Heritage Month in a legacy of unity that promises a better tomorrow for everyone who claims this land as their home.

Reconciliation in Chicago: Voices from the open doors