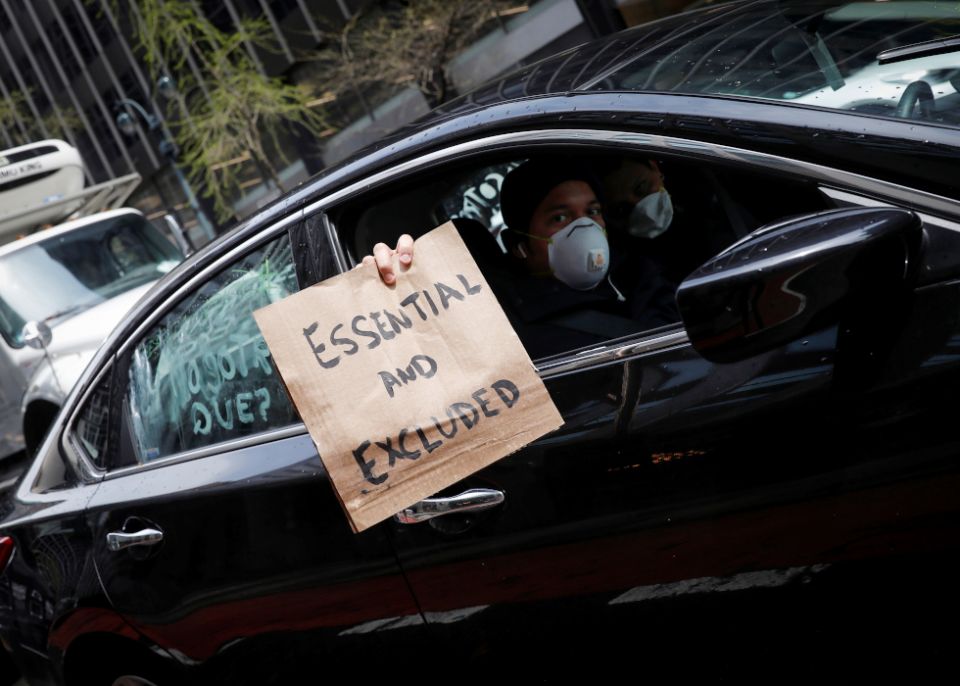 A worker in New York City holds a sign from a car during a caravan demonstration for the rights of essential immigrant workers April 21, 2020. (CNS photo/Reuters/Mike Segar)

Washington — Though it's still unclear how an April 20 tweet from U.S. President Donald Trump saying he would "suspend immigration into the United States!" will manifest itself in policy, some blamed him for trying to scapegoat immigrants as a way to divert attention from the administration's response to the coronavirus pandemic.

Catholic members of the Interfaith Immigration Coalition, a group of 55 national, faith-based organizations, joined an April 21 statement accusing the president of using a "dog whistle" against immigrants.

"Instead," it said, "Trump announced he would suspend all immigration, turning to the dog whistle to distract Americans from the many ways his administration is failing to keep us from dying."

Sr. Simone Campbell, a Sister of Social Service, who is executive director of the Catholic social justice lobbying group Network and is part of the coalition, characterized the proposal as a "racist immigration ban," and one that "comes while immigrants do the essential work that keeps our nation going during this pandemic."

"My faith teaches that welcoming immigrants is our sacred moral duty. Because of this we are called to fight this order," she said. "Trump is desperate to project blame away from himself. As with most bullies, he chooses the vulnerable to attack. He blames immigrants for his own failures. We cannot allow the president to divide us with racist tactics. We stand with our immigrant sisters and brothers."

Jill Marie Bussey, director of advocacy at Catholic Legal Immigration Network Inc., or CLINIC, also part of the coalition, said the tweet revealed the administration's "shameful plan to issue an executive order to further shut down immigration in response to COVID-19."

"The pandemic and its economic fallout, like other societal problems in this country, should not be blamed on immigrants," she said. "At this pivotal moment, we need leadership, truth, unity and pragmatism that rises above politics. Lives are at stake, yet the president continues to stoke fear and racism, using human beings as fodder. We are a nation of immigrants and we will not be divided."

Lawrence E. Couch, director for the National Advocacy Center of the Sisters of the Good Shepherd, said the resident had "only earned our skepticism regarding his newest anti-immigration pronouncement."

"Our Greatest Generation did not shut our doors during World War II. Rather than a strategy to protect our country, the president is using this crisis as an opportunity to shut the door to people in need of help," said Couch, whose group also is part of the coalition.

The tweet implied that the move was part of a need to protect jobs, though it didn't explain why the administration had moved a week earlier to relax regulations for a visa program that allowed some business owners to rapidly hire foreign workers to work legally in the U.S., a program largely used to hire farmworkers, and for longer periods of time than before.

"The economic piece is equally misguided. We have shown again and again that immigrants strengthen the American economy. The loss of work affecting millions of American citizens has nothing to do with immigration and everything to do with the pandemic," Krish O'Mara Vignarajah, president and CEO of the Lutheran Immigration and Refugee Service, said in an April 21 statement.

"In fact, the administration recently increased the number of foreign workers allowed into the United States to address the need for agricultural workers," she said. "We must question the mixed messages coming from the White House — how is it that our country is both safe enough to begin reopening soon and in such a dire situation that it must close its borders?"

But Thomas Homan, the administration's former acting director of U.S. Immigration and Customs Enforcement, told the Reuters news agency that "it's really not about immigration. "It's about the pandemic and keeping our country safer while protecting opportunities for unemployed Americans," he said.

By mid-March, 22 million Americans had filed for unemployment.

El Paso's Hope Border Institute, which has been a fierce critic of the administration, also weighed in via Facebook on the tweet, which is expected to turn into an executive order.

"We will not be fooled into blaming 'the other.' We will not fall for racist attacks for political gain. We will not be led astray by false narratives of 'good' or 'bad' immigrants," the organization said on April 21. "We will not stand by as our community members are considered expendable in the face of a pandemic. We know better and we demand better."