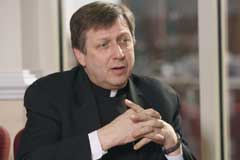 Washington
Father Larry Snyder is an ambitious man -- not for himself, but for the poor and often voiceless Americans whom he serves as president of Catholic Charities USA.

Facing the worst challenge to the U.S. and world economy since the Great Depression, he said in an interview with NCR, “Maybe with this opportunity to remake our economic system we can correct some of its shortcomings (that existed) before.”

Father Larry Snyder is an ambitious man -- not for himself, but for the poor and often voiceless Americans whom he serves as president of Catholic Charities USA.

Facing the worst challenge to the U.S. and world economy since the Great Depression, he said in an interview with NCR, “Maybe with this opportunity to remake our economic system we can correct some of its shortcomings (that existed) before.”

I mean the fact that we had 12 percent of the people (even before the recession began) living in poverty -- was that acceptable?” he asked. “Well, I don’t think so.”

He added that even with the still-deepening U.S. and global recession today, he thinks it is still possible to reduce U.S. poverty significantly in the next decade.

In January 2007 he announced the launch of a Catholic Charities-led Campaign to Reduce Poverty in America, with a goal of cutting the number of U.S. households living in poverty in half by the year 2020.

He compared the challenge today to that of President Franklin D. Roosevelt’s New Deal, which included Catholic-led legislation establishing the Social Security System and, for the first time in history, a minimum wage for U.S. workers.

As one of the first members of President Obama’s newly formed Advisory Council for Faith-Based and Neighborhood Partnerships, Snyder said he will use that position to try to promote policies and programs protecting and supporting human dignity across the life spectrum, from advocacy for immigrants, the unemployed, the poor and the elderly to reducing abortions.

The council’s first 15 members include two Catholics and several Evangelicals who are also strongly pro-life as well as other religious and secular members who are pro-choice, he said. Snyder said he expected that another Catholic would be added as the council is brought up to its full membership of 25.

He said one of the mandates President Obama has given the council is to try to find common ground to reduce the number of abortions in the United States despite the diverse views of the members on its legality.

“On the life issue ... we’re to come to common ground -- without sacrificing, of course, any of our principles, and that’s not what the point is about,” he said.

Even as the church has worked to overturn Roe v. Wade and restore legal restrictions on abortion, he said, it has also worked to reduce the number of abortions in other ways.

“Catholic Charities all along has tried to provide options for women who are facing this decision in their life, that they would be supported through prenatal care that is either affordable to them or free, and then also support after the baby is born through different kinds of services,” he said. “So for us, I think that’s something we’ve been doing for a long time anyway -- and if we can get other people more involved in that, I think, all the better.”

A priest of the St. Paul-Minneapolis Archdiocese since 1988, Snyder became president of CCUSA in February 2005 after 14 years with Catholic Charities in his home archdiocese, the last six as CEO. Before he entered the seminary he spent eight years teaching music and German at Catholic high schools in Illinois.

The CCUSA -- whose 1,400 member agencies across the country annually provide services to about 10 percent of the nation’s populace facing poverty, hunger, homelessness, health issues and a variety of other needs -- is no stranger to addressing national policy issues that have a moral dimension.

Snyder’s immediate predecessor was Father J. Bryan Hehir of Boston (2001-03), widely known before that as the chief staff architect of the U.S. bishops’ landmark 1983 pastoral letter on nuclear deterrence, The Challenge of Peace: God’s Promise and Our Response. Father Hehir, now director of Catholic Charities in Boston and a professor of religion and public policy at Harvard University, remains a major intellectual force in the United States on many issues of Catholic social teaching and public policy.

Snyder’s most illustrious predecessor in terms of U.S. domestic social policy was Msgr. John O’Grady, director from 1920 to 1961 of what was then called the National Conference of Catholic Charities. O’Grady played a major role in the establishment of the Social Security System in 1935 and in the inclusion of child benefits in Social Security.

Reflecting back on that program emerging from the Great Depression, Snyder called it “the most successful anti-poverty program in our nation’s history.”

He suggested that if Americans develop the political will -- which he said Catholic and other religious leaders could help create out of the current economic crisis -- a new America might arise that treats all of its people more fairly and equitably.

“The church’s role is not to bless any economic system,” he said. “I think as we read through the social teachings of the church, we see that the popes over the centuries have warned us about the shortcomings of almost every economic system. But they do so in a spirit of making sure that what comes first is the person, the human person.

“And I think that’s the role of the church, to make sure that we are there advocating for the ones whose voices maybe are absent,” he added. “We’re advocating so that nobody is left behind and everyone’s well-being is taken into consideration. So I think that there is a definite role for the church here.”

In February, at the annual national Catholic Social Ministry Gathering in Washington, Snyder warned that the recession could increase the number of Americans living in poverty from 37 million to 50 million.

When asked in the interview whether, in light of that, he still thinks it is realistic to be able to cut poverty in half by 2020, he said, “Well, I confess that I’m an optimist. I think it is. The issue here is not, Do we have the resources? We have the resources. As a country we’re very blessed with resources. I think the issue is more one of priorities. Our first challenge as Catholic Charities is to create the political will to really address poverty in a significant way. ... This is a matter not only of faith and values, it’s also a matter of justice.”

“This is not Pollyannish,” he said. “We in fact cut our poverty rate in half between the years of 1958 and 1972. It’s been done. Very credible economists are telling us -- and this is not just at a national but at a world level -- we as a world, as a global community, have the resources to do away with global poverty if we have the political will to do it.”

He said he was not advocating a return to President Johnson’s Great Society programs of the 1960s. “The criticism there is that the solution was social programming. I think what we’re saying today is, the solution has got to be empowerment of individuals and the development of individuals, so that they participate and bring about their own economic recovery.”

As examples of empowerment rather than social programming, Snyder cited President Obama’s emphasis on education in the economic recovery package and his declared goal, in his first address to a joint session of congress, of making the United States world leader in high school graduates by 2020.

“We’ve go a lot of work to do then, because it’s a huge problem in this country that so many young people do not graduate from high school,” he said. “And that impacts them personally but also impacts us socially in an economic way.”

Another issue, he said, is: “How do we promote asset building? It’s one thing to say that 12 percent of Americans live below the poverty line, and we certainly expect that number’s going to go up this year. But other studies show that 25 percent of Americans don’t have tangible assets. They don’t own a home, they don’t own a car, they don’t have a savings account. How do we work with people to build up assets?”

CCUSA was already giving a lot of attention to that issue before the economic downturn, he said, and “as we start to, hopefully, work towards a recovery, that will certainly be something that we see as a priority.”

He said the increase in demand on Catholic Charities services across the country in recent months “has been dramatic. It’s been very dramatic.”

He cited a recent “snapshot survey” CCUSA took of diocesan Catholic Charities agencies. The survey -- a summary is available in the newsroom link at www.catholiccharitiesusa.org -- found that 82 percent of the agencies experienced increased demand for food services, 90 percent experienced increases in requests for financial aid, 90 percent had more requests for utilities assistance, 86 percent had more requests for mortgage or rent assistance.

Nearly two-thirds of the agencies said food was the biggest need their clients faced during the 2008 holiday season, and one-third said the need was so great last November and December that they faced food shortages.

“What’s kind of surprising -- I guess not so surprising as disconcerting -- is the fact that the groups who are coming to us now have expanded, that working people who would be considered middle class are coming,” Snyder said. “And the other group that’s disturbing is that there’s a fair number of senior citizens who now have to come for assistance.”

Some Catholic Charities directors have told him that because of increased awareness of the human needs arising from the economic crisis, donations have actually gone up recently, he said. “A lot of our other agencies, I have to say, have already seen a decrease in their funding and have had to do layoffs and/or curtail traveling or have not given raises last year,”

He said member agencies across the country “are all very nervous about” a likely need to make further budget cutbacks this year even as the demand for their services grows.

“What we (at CCUSA) are trying to do is look at areas where they may find some help,” he said. “In the recovery package, for example, there are some earmarked monies that help specifically with programs that Catholic Charities already is doing. So we’re certainly going to try to get that information to our agencies.”

As an example he cited the recent reauthorization and substantial expansion of the State Children’s Health Insurance Program, which offers medical coverage to children of families who earn too much to qualify for Medicaid but not enough to afford health insurance. The $32.8 billion bill, signed by Obama Feb. 4, extends SCHIP coverage through 2013. By raising the income cap for eligibility, it expands the number of eligible children from 7 million to 11 million.

Snyder, who attended the bill-signing ceremony, said, “It was great that now we’re seeing 11 million children will have health care coverage. But the challenge in that is now enrolling them -- and it’s not an easy challenge. You may think it is, but it is not. So there is money in that bill to provide organizations with resources to enroll the children.”

Despite some new program funding such as that, he said, “I suspect (our Catholic Charities agencies) are going to be very strongly challenged to get the level of resources that they need” during the recession.

In 1971, the bishops sounded a call for justice