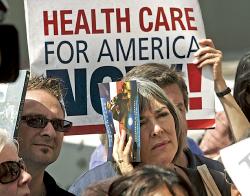 A crowd listens to speakers at a Health Care Prayer Rally at Blessed Sacrament Church in Hollywood, Calif., Aug. 11. The rally was sponsored by LA Voice, an interfaith community organization. (CNS/Reuters/Fred Prouser)

WASHINGTON -- For decades the U.S. Catholic church has pressed for major reform of the nation’s health care system. Now that such reform appears near reality, the church has high stakes in what shape it takes.

Universal health coverage, protection of the sacredness of all human life and conscience protection for health care workers and institutions are among the church’s top concerns.

care reform should be truly universal and genuinely affordable. ... Health care is not just another issue for the church or for a healthy society. It is a fundamental issue of human life and dignity.”

“The current system is not working. In a nation as strong as ours, far too many people have no access” to adequate health care, said Kathy Saile, director of the bishops’ Office of Domestic Social Development. “If we do nothing, it will get worse.”

“The hopeful sign is that nearly all the stakeholders are at the table,” she added, contrasting the current effort with the Clinton administration’s failed attempt at health care reform in the early ’90s, when health insurers, hospitals, pharmaceutical companies and others sharply resisted and ultimately subverted any real reform.

For the church, one key goal in any reform is assuring universal, affordable access to health care.

With some 46 million Americans lacking health insurance, according to U.S. figures in 2007 -- undoubtedly much higher now with the recession of the past year -- Catholic social teaching that health care is a basic human right is at stake.

Saile said current legislative proposals that would exclude federal health care subsidies for all illegal immigrants and all legal immigrants who entered the United States less than five years ago run contrary to Catholic social teaching.

The church’s core teaching on the sacredness of human life from conception to natural death is also at stake, with federal abortion funding as the main hot-button issue.

In late July, Cardinal Justin Rigali of Philadelphia wrote a letter to the House Energy and Commerce Committee about the bill H.R. 3200, “America’s Affordable Health Choices Act,” one of the key versions of health reform legislation currently under consideration by Congress.

Rigali, who is chair of the U.S. bishops’ Committee on Pro-Life Activities, urged the legislation be amended to assure that it would not become “a vehicle for promoting an ‘abortion rights’ agenda.”

“The U.S. Conference of Catholic Bishops is working to ensure that needed health reform is not undermined by abandoning long-standing and widely supported policies against abortion funding and mandates and in favor of conscience protection,” he wrote.

H.R. 3200 was amended July 31 to prohibit any public funding for abortions, “for which the expenditure of federal funds appropriated for the Department of Health and Human Services is not permitted.”

Richard Doerflinger, associate director of the bishops’ Secretariat of Pro-Life Activities, said that language currently refers to the Hyde amendment -- in force since the mid-1970s and named after the late Rep. Henry Hyde, R-Ill. -- which prohibits federal funding for abortions except in cases of rape, incest or threat to the life of the mother.

“Of course, next year [the Department of Health and Human Services] could kick out the Hyde amendment,” Doerflinger said.

The July 31 amendment to H.R. 3200, introduced by Rep. Lois Capps, D-Calif., would prohibit public funding of abortion under the health reform law for any abortions denied federal funding under the Department of Health and Human Services “based on the law as in effect as of the date that is six months before the beginning of the plan year involved.”

In other words, if Congress passes health care reform this year with the Capps amendment and then eliminates or modifies the Hyde amendment in its next appropriations bill for the Department of Health and Human Services, six months later the broader new version of federal abortion-funding legislation for the department would also apply automatically to all federally funded abortions under the health care reform law. “If that [Health and Human Services provision] changes, then that change also gets transferred over to the mandate in this bill,” Doerflinger said.

In addition, he said, since optional abortion coverage in the proposed public insurance plan would be covered by participant premiums rather than federal subsidies, it would only take a ruling by Health and Human Services to expand such coverage: The Hyde restrictions apply only to federal funding of abortions.

So what looks like a major restriction on federal funding of abortion in the Capps amendment to H.R. 3200 in fact presents a substantive loophole allowing expanded abortion coverage in the public sector of the health reform proposals. In the sector of private insurance, the proposals before Congress foresee a continuation of the current situation in which some health insurance plans cover abortion and others do not.

A third major area of Catholic concern in health care reform is the protection of conscience for individuals and institutions that conscientiously object to engaging in some of the health care activities permitted under the reform.

“Forty-six states have [laws protecting] conscience rights on abortion,” Doerflinger said. He noted that part of the Capps amendment to H.R. 3200 prohibits federal preemption of any “state laws regarding the prohibition of [or requirement of] coverage, funding, or procedural requirements on abortions, including parental notification or consent for the performance of an abortion on a minor.”

The amendment also prohibits any application of the proposed health reform legislation that would affect other federal laws on conscience protection, willingness or refusal to provide abortion, or discrimination based on a person’s or institution’s stand on abortion and abortion services.

In late July several pro-life Internet sites began to take Catholic Charities USA, the Catholic Hospital Association and the St. Vincent de Paul Society to task for cosponsoring a campaign for health care reform that did not explicitly include warnings about the reform’s potential for advancing the legalized abortion agenda.

The St. Vincent de Paul Society said it “has not supported any particular or specific legislation; it has expressed its concern for the need for the U.S Congress to deal with this most urgent need now.”

National president Joe Flannigan said the society, in collaboration with the bishops’ conference, Catholic Charities USA and the Catholic Health Association, will continue to work for conscience clause provisions and continuation of the Hyde amendment provisions in any federal legislation.

The society linked its response to its 2004 statement on health care reform, which declared its commitment to protection of the sanctity of life “from conception, to maturity, to aging.”

Similarly, Catholic Charities USA declared “unequivocally that it does not support any plan to reform health care and/or any proposed legislative provision that allows or promotes the funding of abortions or that compels any health care provider or institution to provide such a service. In fact, Catholic Charities USA will continue to work with the Catholic Health Association and the U.S. Conference of Catholic Bishops to ensure that any health care reform legislation will not include such provisions.”

“All media accounts or public comments that misrepresent this position are inaccurate,” it added.

Catholic Charities USA is promoting health care reform as an integral part of its campaign to reduce poverty in America by 50 percent within the next 10 years; however, the agency is on record opposing abortion as part of any such reform.

NCR was not immediately able to reach Daughters of Charity Sr. Carol Keehan, president and chief executive officer of the Catholic Health Association, who was abroad on business for her order, but before she left she told Catholic News Service that the Internet reports are distortions.

“We need health reform that respects the life and dignity of every person, from conception to natural death,” she said. “That means the unborn, it means the patient with multiple sclerosis, the patient with cancer, the young mother, the addicted, the mentally ill, the dying patient, and the frail, frail elderly.”

Catholic Charities, St. Vincent de Paul, the Catholic Health Association and the bishops’ conference have been sending the same clear message to the Hill that any health reform must be “at least abortion-neutral,” CNS reported.

Doerflinger said the complex legislative process on health care reform still leaves many questions of major concern to the church unanswered. He noted, for example, that the main bills before Congress have substantial differences that must still be resolved.

He noted that in a recent roundtable with Catholic journalists Obama expressed support for “robust” conscience protection for health care personnel and institutions that oppose abortion. “We would hope that Congress would make that same pledge,” he said.

“There is no ‘Obama bill,’ ” said Saile, noting that the president only set out the broad outlines and principles of health care reform and asked Congress to draft the actual legislation.

She said the Senate’s Health, Education, Labor and Pension Committee passed one bill in early July, and in the House the main bill is a tricommittee one, involving separate markups and amendments from the House committees on ways and means, education and labor, and energy and commerce. The Senate Finance Committee has been the major force in trying to fashion a “bipartisan bill” out of the Health, Education, Labor and Pension proposal in that body, she said.

A thank you to peace advocates