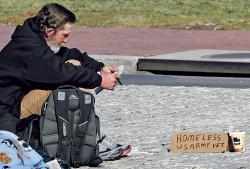 A homeless man reads on a street corner in Washington. (CNS/Bob Roller)

WASHINGTON -- The effect of the global economic recession on the nation's poor stood out as a major challenge as U.S. Catholic leaders in social ministries gathered in Washington in late February.

Diocesan Catholic Charities and other faith-based social service groups are facing staff and budget cuts and pressures to reduce or eliminate some services -- even as the recession-driven demand for those services is mounting rapidly.

Arlene A. McNamee, executive director of Catholic Social Services of the Fall River, Mass., diocese, said the diocese's food pantry served 4,900 families in the previous fiscal year. "This year in two and a half months -- October, November and the first two weeks of December -- we served nearly as many. We were 700 families shy of our total the whole previous year," she said.

The annual Catholic Social Ministry Gathering -- sponsored by 18 national organizations including the U.S. Conference of Catholic Bishops, Catholic Charities USA, Catholic Relief Services and the Catholic Hospital Association -- drew more than 500 participants from across the country Feb. 22-25. Coming mainly from diocesan charity and social ministry offices, they gather to learn, network and, near the end, lobby Congress on key issues of Catholic social concern.

"Credible experts predict that before an economic turnaround will happen, 50 million Americans will find themselves below the poverty line," he said. That would represent more than a 30 percent increase over the estimated 37 million Americans in poverty before the recession began.

In interviews with Catholic Charities officials at the gathering and in phone conversations with others around the country just before the meeting, NCR found story after story that supported Snyder's comments.

Tiziana Dearing, president of Catholic Charities of the Boston archdiocese -- which last fiscal year relied on government contracts for 52 percent of its $42 million budget -- said that the "volatility" and "unpredictability" of state budget decisions have made it almost impossible for her agency to develop a stable budget for the coming year.

She said that in recent months she and her staff have thanked God that they don't have a substantial endowment that they would have relied on for a significant part of their annual income.

Institutional endowments like individuals' 401(k) or 403(b) retirement plans have taken major hits as the stock market plunged over the past year. Such endowments have become almost a liability because their losses have eliminated them as an income source for now and the foreseeable future.

Dearing, in a phone interview Feb. 20, said Boston Catholics have responded generously so far to the economic crisis. While corporate donations have declined in recent months and the state's social service contracts are up in the air, she said, "revenue from new donors has increased 31 percent."

But she also expressed a fear that the recent expansion of individual donors may have been "front-loaded" and may not be sustainable over a longer term in a recession economy.

In other words, as the recession deepens, those one-time increases among individual donors are not likely to continue as individual Catholics assess their own economic futures.

In the Seattle archdiocese, 90 percent of the budget of Catholic Community Services of Western Washington comes from state contracts.

"We are concerned, and we are working closely with legislative leaders" to preserve as much as possible of that funding, said Fr. Kenneth Haydock, pastor of Holy Rosary Parish in Edmonds, Wash., and archdiocesan episcopal vicar for Catholic Community Services of Western Washington.

"The bottom line is, you can't shut people out. You have to fulfill the need. You know, we have to provide, to scrounge around, to the best of our ability to provide housing, to provide for people in crises, to provide whatever it takes, we have to do it."

Ursuline Sr. Christine Pratt, director of the Toledo, Ohio, Catholic Charities Department of Parish Ministries and Social Concerns, said that even before the recession the Toledo diocese had been forced to cut back on Catholic Charities staff and programs. She said the current staff of 30 is one-third what it was six years ago.

When the local United Way stopped funding counseling, the diocese was forced to drop all its counseling staff and services because it had no alternative funding source, she said.

She described part of her job as being a resource for parishes, helping them to do what the diocese cannot. "We need now to encourage our parishes, to really be neighbors, to watch out for one another," she said.

Pratt said so much of the Toledo area economy is oriented toward the automotive industry -- car plants and manufacturers of auto parts -- that it now has the highest unemployment rate in Ohio apart from Cleveland.

"We've already experienced large cuts," said Tere Brown, director of programs for Catholic Charities CYO of the San Francisco archdiocese, which receives about 60 percent of its funding from state contracts for services.

Among recent funding cuts, she said, were aid for mental health services and aid for poor people with HIV.

Brown said San Francisco Catholic Charities has had to make staff cuts as funding for some services has lowered or evaporated. "We have an incredible staff. They're not in this to make money," she said.

But as staff members see fellow employees laid off even as they try to meet higher demands with fewer personnel and less funding, it's hard to avoid a "crash and burn" mentality, she said.

Rebecca Lentz, communications director for Catholic Charities of the St. Paul and Minneapolis archdiocese, said that "Minnesotans are generous" in responding to people in need, but the current crisis has created a new situation.

She said the homeless shelters the archdiocese offers are being stretched to the limits: up 25 percent from last year and almost 50 percent from the year before. People in those shelters are now sleeping on rows of mats on the floor that are separated only six inches horizontally and 12 inches from head to foot, she said.

"Our donations are up. We haven't seen a downturn yet," said Michael W. Halterman, CEO of Catholic Charities of the Kansas City-St. Joseph, Mo., diocese. While his agency, which also serves the Springfield-Cape Girardeau, Mo., diocese, has not yet suffered budget restrictions, Halterman acknowledged, "We're not meeting all the needs. No one is."

At one plenary session of the Washington meeting, John Carr, executive director of the U.S. Conference of Catholic Bishops' Department of Justice, Peace and Human Development, reminded participants, "We are called to serve and stand with the poor. ... The moral and human dimensions of this crisis are why we are here."

Printed in the March 6 issue of NCR

Catholic groups pressure Brazil, US to protect the Amazon and its people