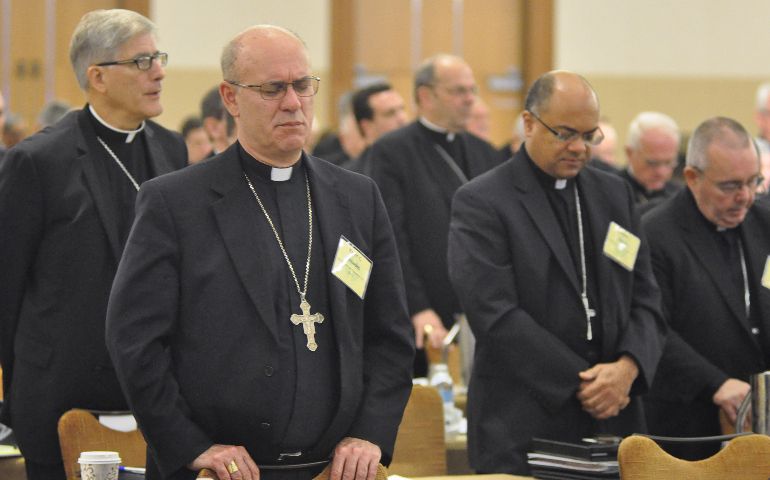 As the country awaits the U.S. Senate's plan to repeal and replace the Affordable Care Act in the coming weeks, the U.S. bishops made it clear June 15 during their annual spring assembly in Indianapolis that their efforts are focused on "ensuring the fundamental right of medical care" for all people.

The U.S. Conference of Catholic Bishops also reinforced its stand that the American Health Care Act passed by the U.S. House May 4 needs major reform — to provide quality health care for the "voiceless," especially children, the elderly, the poor, immigrants and the seriously ill.

"We find ourselves in a time marked by a deep sense of urgency and gravity," said Bishop George Thomas of Helena, Montana, in his remarks to his fellow bishops. "Within two weeks, we may see a federal budgetary action with potentially catastrophic effects on the lives of our people, most especially children and the elderly, the seriously ill, the immigrant and our nation's working poor."

Referring to the House bill, known as AHCA, and its plan to "eliminate $880 billion from Medicaid over the next decade," Thomas continued, "If left unchallenged or unmodified, this budget will destabilize our own Catholic health care apostolates, take food from the mouths of school-aged children and the homebound, and deny already scarce medical resources to the nation's neediest in every state across the land."

His passion growing as he spoke, Thomas concluded, "These are our people, our communities, our parishioners and members of our own beloved families. As a conference of bishops, we have the responsibility to read the signs of the times, to shine the light of the Gospel and Catholic social doctrine on this proposed budget."

Thomas' remarks drew appreciative applause from the U.S. bishops on the second day of their June 14-15 meeting.

He was the first bishop to speak following a report on health care reform by Bishop Frank Dewane of Venice, Florida, chairman of the U.S. bishops' Committee on Domestic Justice and Human Development.

In his report, Dewane also focused on how the U.S. Senate will soon turn its attention to repeal and replace the Affordable Care Act.

"The Catholic Church remains committed to ensuring the fundamental right to medical care, a right which is in keeping with the God-given dignity of every person," Dewane said. "Both the lives of the unborn and adequate concern for those most in need anchor the USCCB's messages to Congress at this critical time."

He told his fellow bishops that the U.S. bishops have been in constant contact with members of Congress since the House passed its version of a health care plan. Noting that the bishops sent a letter to U.S. senators June 1, Dewane said, "It called on the Senate to strip away harmful promises of the AHCA or start anew with a better bill."

The letter also provided recommendations and guiding principles for the senators as they craft their health care plan, starting with respect for life.

"No health care reform plan should compel us or others to pay for the destruction of human life, whether through government funding or mandatory coverage of abortion," Dewane said about that priority in his remarks.

He also stressed that all people should have access to comprehensive quality health care — and that the cost of health care be affordable, keeping low-income families in consideration. Any health care plan should also respect the conscience rights of people, from patients to providers.

"Those without a strong voice in the process must not bear the brunt of the attempts to cut costs," Dewane said. "The bishops stand ready to work with Congress to address problems with the Affordable Care Act in ways that protect the most vulnerable among us.

"This is an important moment for the country and for the church. The teaching we bring to bear on questions of health and health care do not fit neatly — or really, in many cases, not at all — into the single party platforms," he continued. "Because of this, the church has a unique voice. The committee's work on this issue will remain active and diligent for the sake of those most in need at all stages of life."

Following Dewane's report, other bishops joined Bishop Thomas in sharing their reactions with their fellow bishops.

Cardinal Blase Cupich of Chicago said, "The issue is about the human person. We need to make sure that we put forward that our position is that the state has a responsibility in creating solidarity within a country of caring for those most in need."

Bishop Robert McElroy of San Diego reflected on the comparison between the Affordable Care Act and the proposed plan that the U.S. House of Representatives recently passed to replace it.

"Health care is a fundamental human right, and government is its ultimate guarantor," McElroy said. "The Affordable Care Act for all its flaws was a movement in favor of comprehensive health care. This is a movement away."

"Medical care in the rural parts is in a very delicate state in terms of getting enough doctors and hospitals in those areas," Naumann noted.

He also viewed a call to repeal and replace the Affordable Care Act as an opportunity for the country.

"There was a lot of dishonesty in the Affordable Care Act, not just about the conscience rights and what was done to the unborn," he said. "It was a house of cards. The Medicaid provisions were not sustainable by states, I don't think. Also, we see that many other parts of it were collapsing in terms of what was really available to people.

Naumann added, "The new plans hopefully will really be something that is sustainable. I think this is an opportunity to do something different from other parts of the world, and to really develop quality health care accessible to all."

Before Dewane's presentation, Cardinal Daniel DiNardo of Galveston-Houston, president of the U.S. bishops, opened the agenda item on health care reform was introduced by saying, "We as bishops strive to engage in this debate as a voice for the voiceless, for the poor, the sick, the unborn."

"We also strive to bring to the fore the many moral questions in health care that can affect human flourishing, from life's earliest days to its very final moments," the cardinal said. "Our teaching has much to offer the current discussions, and we have a unique obligation as bishops to make those teachings known. We are also very concerned with how this debate affects the ability of the church to engage in its venerable ministry of healing the sick."

Bishop warns against 'weaponization of Eucharist' with elected officials