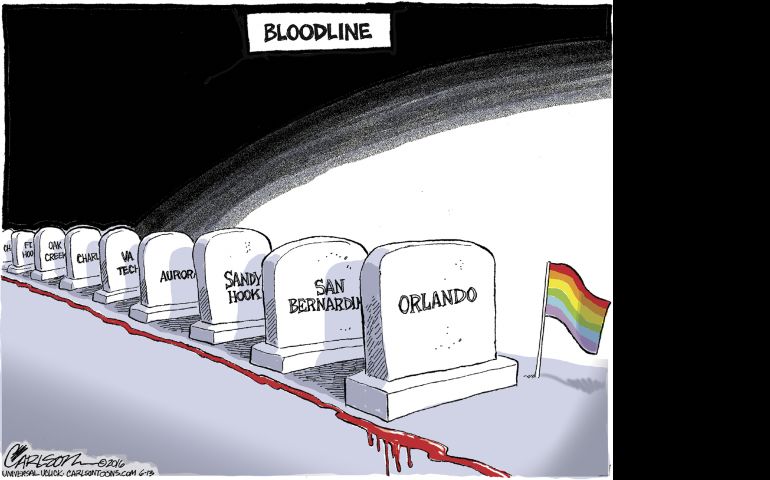 This article appears in the Orlando shooting feature series. View the full series.

Orlando now joins the growing list of previously benign locales -- Columbine, Sandy Hook, San Bernardino, Fort Hood, Virginia Tech, Charleston, to name just some of the better-known -- that have become the unpredictable itinerary of a gun-obsessed culture at the service of seething anger and irrational hatred.

We can no longer allow ourselves the luxury of wringing our hands in torment that another group -- schoolchildren, schoolmates, college kids, military personnel, moviegoers, civic workers, church congregations, or, in the latest, gays and lesbians -- has been singled out for elimination.

Two issues surface above all others in the latest incident, and they are weighted now with moral urgency.

The first is the epidemic of gun violence that has turned the United States into the deadliest place in the developed world for non-war-related hostility. Propelled primarily by the gun culture, the epidemic has been allowed to flourish -- lining the pockets of the gun industry and advanced by the twisted, demonic logic of the National Rifle Association -- to the proportions of a major public threat.

The second is the deliberate assault, driven by centuries of religiously and culturally inspired bigotry and hatred, on the lesbian, gay, bisexual and transgender community. The wider culture in recent decades has made enormous strides in accepting and understanding homosexuality and other orientations that fall outside the majority human experience, as well as the relationships that might result from non-heterosexual unions. But the horror unleashed early June 12 in a gay nightclub in Orlando, Fla., shows that the residue of hatred can inspire monstrous acts.

Younger generations may consider the LGBT community in all of its diversity a non-issue as politics goes. However, deep-seated ideas based on distortions of sacred texts and a literal reading of Christian Scripture selectively applied (how many have gouged out their own offending eyes or lopped off a right hand that was the cause of sin?) will probably ever be with us. It falls to each of us, within our religious traditions especially, to repudiate such falsehoods.

It would seem that at this point in our history -- with the long-established record of unparalleled carnage outside of the circumstances of war -- that it would be easy to make the case for greater controls over firearms and for enacting much stricter requirements for those who wish to purchase a gun of any type. How is solving this problem not a simple matter of self-preservation, when the killing arenas have become schools, churches, public auditoriums, entertainment centers and military bases?

Mass shootings are a rarity, but gun deaths are all too common: at least 12 shot dead in Chicago on Father's Day weekend. A 4-year-old shot dead on a street in Kansas City, Mo., June 20.

Rationality, however, long ago left the discussion. The NRA, once an organization that taught gun safety and promoted the interests of ordinary gun owners, has morphed into a craven, unprincipled shill for the gun industry and an advocate for unfettered access to weapons that have no place in civil society.

One of the persistent myths of the gun culture is that more "good guys" with guns would mean more safety. According to data gathered by the American Academy of Pediatrics and the Henry J. Kaiser Family Foundation, that notion is far-fetched. The top-ranked states in terms of gun ownership are also the top states for rates of gun deaths.

In 2014, according to the FBI, 8,124 people in the United States were murdered by gunshot. Thousands more were wounded. The rate of homicide by gun in the United States, 31 per million, or an average of 27 shooting deaths per day, make this country "an extreme outlier when measured against the experience of other advanced countries," according to a recent report in The New York Times. Nowhere else in the developed world do people have so much to fear from fellow citizens wielding firearms.

In any other sphere, society would demand answers and expect government intervention to seek a solution. In the case of guns, however, Congress has blocked any attempts to even understand why we kill each other with these weapons at a greater rate than that of any other "rich" or developed country.

The lack of concern may be a mystery at one level, but at another it is quite understandable. According to an investigation by The Washington Post, the NRA has donated $3.8 million to current members of Congress since 1998. But direct candidate contributions are a tiny sliver of what the NRA spends on political influence.

It spent $29.2 million in congressional elections in 2014, according to the Center for Responsive Politics. Three percent went directly to candidates. The vast majority of NRA political spending is in so-called "independent expenditures" -- broadcast ads, internet and social media campaigns -- focused on issues that target the opponents of the NRA-favored candidates. Nearly all of these "independent expenditures" are funneled through dark money organizations that have flourished in the wake of the Citizens United Supreme Court decision that decimated campaign finance laws.

The NRA's spending on lobbyists regularly exceeds $1.5 million a year, seeking influence not just in Congress but in the Departments of the Interior and of Agriculture and in the Alcohol and Tobacco Tax and Trade Bureau. It lobbies regularly against campaign finance reform.

This web of money explains how the NRA keeps Congress captive against the will of the people who, in poll after poll and across partisan lines, express strong preference for reasonable restrictions on gun sales and more rigorous requirements for background checks. In the latest example, the Senate failed June 20 to pass four gun control measures.

"What am I going to tell 49 grieving families?" asked Sen. Bill Nelson (D-Fla) following the vote. "Sadly, what I'm going to have to tell them is the NRA won again."

The NRA may finally be facing some formidable pushback. The American Medical Association, reacting to the mass shooting in Orlando, voted to deem gun violence a public health issue and to pursue the matter on the political front. The largest medical organization in the United States also has one of the largest lobbying budgets of any U.S. organization and intends to back its concern with money.

The AMA will take aim at reversing a 20-year-old law, backed by the NRA, banning the Centers for Disease Control and Prevention from doing simple research on gun deaths.

"Even as America faces a crisis unrivaled in any other developed country, the Congress prohibits the CDC from conducting the very research that would help us understand the problems associated with gun violence and determine how to reduce the high rate of firearm-related deaths and injuries," AMA President Dr. Steven Stack said in a written statement.

It is a relatively small but influential group that makes the case for the most extreme interpretation of Second Amendment rights. Controlling the flow of guns and creating a culture that makes endangering the general population with firearms at least as offensive as subjecting people to secondhand smoke are the first steps in reclaiming public spaces as territory safe to everyone.

The simplest steps in restoring sanity are available to all and are rooted in our democratic traditions. Keep unrelenting pressure on local, state and federal elected representatives. Join a local organization working to stem gun violence -- many dioceses have these groups already. Write letters to the editor and to elected officials. Sign petitions. Join a march. Vote.

Orlando was the latest expression of a deep societal illness that feeds on fear. Let's not stand helpless in the wake of another mass shooting and as people continue daily to fall around us, the victims of gun violence. It is time to confront this public menace head on.

The massacre in Orlando was a heinous hate crime, a moment screaming out for moral outrage, for the words to match the horrific reality. What the Catholic community in the United States received from the president of its bishops' conference was a three-sentence serving of sanctimonious boilerplate that, except for the use of the term "violence," might have been referring to a natural disaster or a plane crash.

We appreciate the stronger statements coming from individual bishops -- Blase Cupich of Chicago, Robert McElroy of San Diego, Robert Lynch of St. Petersburg, Fla., Gerald Barnes of San Bernardino, Calif., Frank Caggiano of Bridgeport, Conn., and Edward Scharfenberger of Albany, N.Y., notable among them. These statements not only called out the country's gun violence but named the shooting a hate crime against the LGBT community and expressed solidary with that community. Some even acknowledged religion's role in fostering "contempt" against gays and lesbians.

The Catholic community, however, does not have to wait for approval or direction from on high to know what to do in this extreme circumstance. Ordinary Catholics as a group were well ahead of the hierarchy in approving the extension of rights to the LGBT community. Catholics consistently poll as among the most tolerant of all denominations, despite some particularly ugly content in official documents and hierarchical pronouncements.

The Catholic community knows a hate crime when it sees it and should do all it can to promote understanding and tolerance.

It is good to have the language of a few members of the hierarchy who understand that intolerance breeds contempt and violence, but we can't and don't need to wait for bishops to speak. The laity are leading the bishops on this issue, and with a strong, persistent voice, we can and must advocate against discrimination based on sexuality and gender in society and in our church.

The Catholic community, making the case from the church's social justice tradition and the inherent Christian concern for the common good, can become a formidable influence in challenging the status quo. Standing together, we can say no to a culture of gun violence. We can say yes to gender justice and inclusivity.

Engage the future: Reflections on the apostolic visitation report