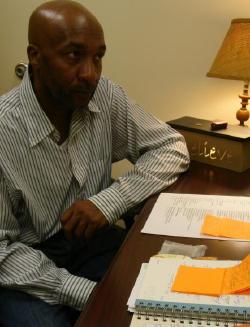 WASHINGTON -- Germain Stoddard says employers are impressed when they see the range of experience on his resumé: nearly three decades spent working construction, landscaping, printing and furniture manufacturing jobs within the prison industry. But after a brief interview, they thank him and say they will be in touch. He gets the feeling they are just going through the motions.

Since his release from prison in November, the D.C. resident has been on 21 interviews for food preparation, hotel and construction jobs. Not one has resulted in an offer of employment.

But Stoddard, 52, maintains a positive outlook. He says he is no longer the bitter, mistrustful young man who entered prison 28 years ago, one of two men convicted of breaking into a Lorton, Va., prison and murdering an inmate.

Back then, he placed the blame on everyone else rather than on himself, he says, but over the years he has become a more spiritual, self-aware and patient man.

At the Welcome Home Reentry Program office in northeast Washington, Stoddard said the time he spent in prison is behind him. In the last few months he has been reconnecting with family and discovering everything he missed during his incarceration, learning how to use a cell phone, surf the Internet and ride the subway.

He is also meeting regularly with a mentor assigned to him by the faith-based organization affiliated with the Washington archdiocese and Catholic Charities, a man who is helping him adjust to life after prison.

"He gives me the guidance and understanding of what I need to do to become a man," Stoddard said. "He's there to support me on anything that I'm trying to accomplish."

The nonprofit organization with offices in Washington, Montgomery County, Md., and Prince George's County, Md., is part of Prison Outreach Ministry, Inc., which assists former inmates via the mentoring program and provides referrals for housing, employment, health care and other services they may need.

"The mentors are recruited to help the mentees navigate the barriers that they're sure to encounter when they get out," issues that range from finding a job to dealing with family problems, said Joyce Void, program coordinator at the Washington office. But they also offer emotional support.

Void said the men and women returning from a life behind bars need to have someone believe in them. "Hope is the last commodity we all have, and if you have hope, you have courage and determination."

The U.S. Department of Justice estimates that about two-thirds of the 650,000 ex-offenders released from prison each year will be arrested for new offenses within three years. Often returning to the same impoverished communities where they were initially arrested -- and lacking employment, housing and a support system -- they frequently run into the same challenges that led them to break the law.

Gerald Grimes, project manager at the Reentry Center inside the Mayor's Office of Employment Development in Baltimore, said finding work is the biggest challenge facing his clients.

"The labor market, as well as the impediments that society puts on someone with a conviction, sometimes they can seem insurmountable to our population," he said.

The one-stop center inside Baltimore's Mondawmin Mall partners with federal, state and community agencies to offer a number of services, from career development workshops to housing assistance to bus passes. Job developers work with employers who are open to the idea of hiring an ex-offender, among them hotel and grocery store chains, retailers and local businesses.

The construction, trucking and food service industries are typically "ex-offender friendly," Grimes said. Still, finding work for this segment of the population could take two or three times as long as it would for a non-offender, when employers are doing background checks even for jobs at the lowest end of the pay scale. Some employers don't hire ex-offenders because they legally cannot, as is the case with education jobs; others are afraid of the stigma associated with having a former inmate on the payroll.

Since it opened in 2005, the reentry center has helped secure work for an average of 500 customers per year, Grimes said. He has found that the majority of ex-offenders are conscientious workers eager to get their lives back on track -- people like Phillip Smith, who made mistakes in his youth but deserves a second chance.

"I was pretty much raised in a home where drugs were more important than food, literally," said Smith, a 35-year-old Baltimore resident who comes to the center a few times a week to take advantage of job resources.

His father died of a drug overdose and his mother used heroin regularly. Smith said he started distributing drugs at age 13 and had already been incarcerated twice by the time he turned 18. At 23, he was caught with 1.5 kilograms of heroin and $22,700 in cash.

He is trying to start over after 11 years in prison.

"I put my best foot forward every day," said Smith, wearing a suit and tie donated by the reentry center, but employers will not give him a chance. "Now that I want to do the right thing, there's no door opening for me."

In the future he hopes to start a nonprofit organization reaching out to at-risk youth and ex-offenders, but right now he will take any work that brings him a paycheck.

William Wilson, director of reentry and outreach at Offender Aid and Restoration in Arlington, Va., visits jails frequently to speak about the justice organization's programs and he assists ex-offenders transitioning back into the community. Experience has shown him that rejection and being unable to find work makes people bitter, taking them back to "survival mode."

But it is possible for ex-offenders to find work, even in an economy where jobs are scarce for applicants without a criminal record. In the fiscal year that ended in January, Wilson said the organization found jobs for 76 clients.

Stoddard, the D.C. resident in the Welcome Home mentoring program, is waiting to hear back from a courier job for which he recently interviewed.

Within a year, he wants to be employed and self-sufficient, someone who gives back to his community. For now, he said, he is earning people's respect.

When friends and acquaintances from his past offer to involve him in illicit dealings, Stoddard tells them, "Thank you, but no thank you, man. I'm just trying to find me a job and stay out of the way."