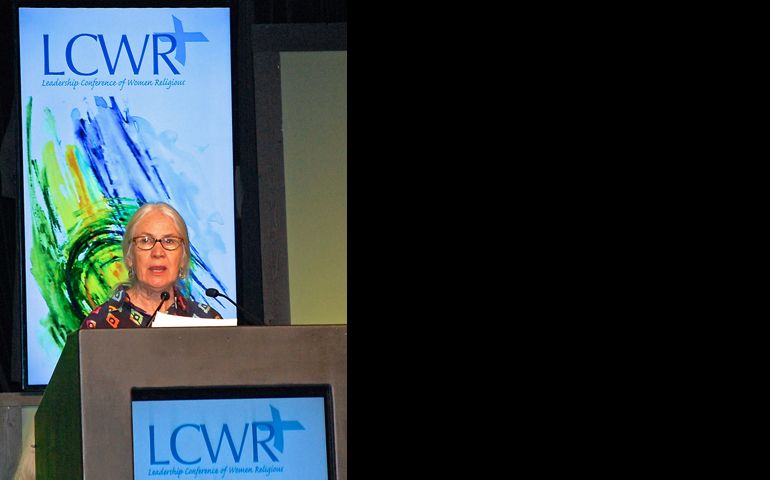 Activist Debra Pekny speaks to LCWR members Thursday in Nashville, Tenn., about her efforts to stop the proposed Bluegrass Pipeline, which was to carry natural gas and natural gas liquids such as propane, methane and butane, from Ohio to Louisiana. (Dan Stockman)
This article appears in the LCWR 2014 feature series. View the full series.

Nashville, Tenn. — The largest leadership organization for U.S. women religious on Thursday called on Pope Francis to repudiate the doctrine of discovery, a 15th-century policy justifying violence against indigenous peoples.

In a closed session Thursday, members voted to adopt a resolution calling on the pope "to lead us in formally repudiating the period of Christian history that used religion to justify political and personal violence against indigenous nations and peoples and their cultural, religious and territorial identities."

According to the resolution, modern-day indigenous people continue to suffer as a direct result of the doctrine formalized in papal bulls from the 1400s, including Dum Diversas, Romanus Pontifex and Inter Caetera.

Dum Diversas, issued in 1452, authorized the conquering of Muslims and pagans and enslaving them, a policy reiterated by the other two papal bulls.

The resolution also asks Pope Francis to publicly clarify and repudiate any remaining legal status of the bulls and to issue a pastoral statement to the courts of former colonial nations, urging them to change elements of their laws derived from the papal bulls that continue to harm indigenous people.

Also approved was a resolution urging the transition to renewable energy sources.

"We commit ourselves to use our spiritual, social, and educational resources and our public credibility to promote the national transition from fossil fuel energy sources to renewable energy sources as quickly as possible," the resolution read.

Members then moved to an open session, where they heard from a panel on environmental issues, including mountain-top removal coal mining, hydraulic fracturing (known as "fracking") to tap oil and natural gas, climate change, and pipelines carrying hazardous liquids.

"What I see is a world hurtling toward self-destruction," said Claire McGowan, a Dominican sister. "The human community faces its largest crisis it has ever faced in our long, evolutionary history. We call this crisis 'climate change,' and the crisis exists precisely because of fossil fuel usage."

McGowan noted that dozens of religious communities have transitioned from using fossil fuels to renewable energy sources such as solar, geothermal and wind.

Loretto Sr. Maureen O'Connell talked to the group about mountain-top removal coal mining, in which entire mountains are mined away, and grassroots activist Debra Pekny talked about her and her husband's efforts to fight the proposed Bluegrass Pipeline. The project has since been suspended.

"It was the grassroots efforts of everyday people ... that was a huge factor in that decision," Pekny said. "Every person in this room has the power to make things happen."

The group then attempted to put that power to work by filling out postcards to lawmakers who have led efforts to protect the environment, thanking them for their work.

The assembly concludes Friday evening, when St. Joseph Sr. Elizabeth Johnson is to receive LCWR's Outstanding Leadership Award. Johnson is a noted theologian widely considered one of the architects of feminist theology. She has been criticized by a panel of American bishops for her 2007 book, Quest for the Living God, which the panel said is not in accordance with official Catholic teaching, a charge she has denied.