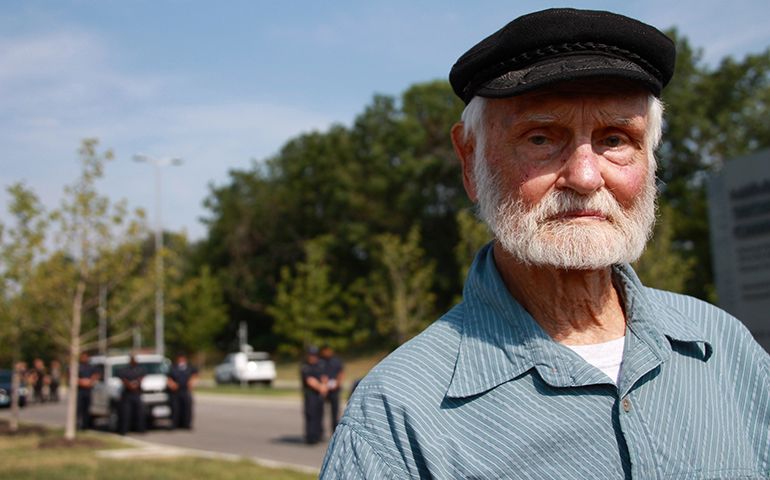 Jesuit Fr. William Bichsel was given six months to live in 2009 because of his failing heart. Not only did he prove doctors wrong, he continued his more-than-four-decade crusade against what he called "ongoing, unabated works of war" and "forces of militarism."

That included mustering enough strength to take part in a "nonviolent peace action" at Naval Base Kitsap, a naval submarine base on the Hood Canal near Bangor, Wash., about six weeks ago.

Bix, as the 86-year-old priest was called by nearly all who knew him, died Feb. 28 "in the presence of the loving community" at Jean's House of Prayer in the Tacoma, Wash., Catholic Worker, which he co-founded in 1989 and where he lived for the last several years of his life, according to friend and colleague Leonard Eiger of the Ground Zero Center For Nonviolent Action.

Bichsel "has been the voice of a prophet in the Oregon Province of the Society of Jesus," Jesuit Fr. Scott Santarosa, provincial, wrote in an email to NCR. "He has fearlessly proclaimed a message of peace and worked tirelessly for the poor and the least in our society. His stances have led him to request permission of his superiors in the Society to lead protests, to cross lines, to commit non-violent actions that led to his imprisonment. In the name of Christ, the Prince of Peace, he willingly suffered the consequences of his actions. My predecessors as provincial have always supported him in his goal to raise our world's awareness of the evils of nuclear weapons and the devastation caused by the many wars that the United States and other nations have been involved in in the past 50 years. His voice for peace and the poor may now be silenced but his message is resurrected in the lives of others who follow in his footsteps."

"I know it sounds idealistic, but I do feel very strongly in the Resurrection and how we can act together," Bichsel told NCR in a December interview following his return from South Korea, where took part in the ongoing resistance against construction of a naval base on Jeju Island. It was his second trip there.

"I believe strongly in my heart in the power of God and the power of creation and the Resurrection. They are much stronger than the powers of death," he said.

A 7 p.m. vigil rosary has been scheduled for March 13 at St. Leo Church in Tacoma. Earlier in the day, a peace walk through Tacoma ending with a vigil at the federal courthouse will be held, Eiger said.

Funeral Mass will be celebrated at 10 a.m. March 14 at the parish. Date and time of inurement at Mount St. Michael's Columbarium in Spokane had not been set as of Tuesday.

A memorial service will be celebrated March 12 at the main gate of the Bangor submarine base in Silverdale. Jesuit Fr. Steve Kelly will preside.

Over the years, Bichsel was arrested more than 40 times and spent nearly two and a half years in prison.

One year of that was in federal custody for his part in the School of the Americas protests in Georgia. The facility has long been accused of training Latin American military who have taken part in human rights abuse.

He was incarcerated for three months for breaching security at the nuclear submarine base. In 2011, he was sentenced to another three months in a federal jail near Seattle for trespassing at the Y-12 National Security Complex in Oak Ridge, Tenn. Part of the latter sentence was served in solitary confinement.

Bischel shouted, "What about the poor?" at Bush a number of times, Whitney said.

"Bush responded by turning to the audience and saying, 'Boy, you get all kinds of nuts around here, don't you?' I am not one who finds yelling out questions to be my thing, but Bush's response was so patronizing and arrogant toward a Jesuit whose methods were not mine but whose point was certainly reasonable that I got peeved. At which point, I stood up and yelled, 'Why don't you answer the question?' Repeatedly. I was removed by our security people, and Bix, as was his desire, was arrested."

When Whitney became Bichsel's provincial, "I really had the chance to come to know him. He was a man of great purpose and call, but he was also a very good Jesuit. I remember asking him not to be arrested at one point, and he was obedient to that."

Whitney and Bichsel also shared "marching together at Bangor."

"He decided he needed to cross the line," Whitney said. "I was concerned because he had already spent time in prison and I didn't want him sent back. His health was already risky. We stood together -- Bill, myself, and Fr. Pat Twohy -- and we discerned, on the scene, where we thought God was. Each of us prayed and spoke our hearts, and Bill listened, and I as provincial listened. Finally, he said what his desire was and accepted the mission to cross the line -- accepted it as a mission. He was always, most deeply, a Jesuit on mission -- and he took that to heart."

St. Leo pastor Jesuit Fr. Steve Lantry described how during a "faith sharing" event, "Bix talked about his work for peace and against nuclear arms. When one of us said ... peace work seemed to have been pushed onto the back burner, Bix said, 'I don't think it's even on the stove anymore!' Even he laughed, but we could tell that in spite of the support and fellowship he experienced with the Plowshares and Ground Zero folks, he felt 'alone' in the peace work -- although he never said that. In that, as in all things, Bix was unfailingly joyful, always chuckling, laughing and smiling. He was a genuine Christian, a true disciple of Jesus -- one of a kind. When comes such another?"

"He was not just a great priest, but a rare Christian, a true peacemaker. He lived among the poor and served them, spoke out against war and nuclear weapons, and suffered imprisonment and rejection, but he did it all with a smile and a spirit of nonviolent, loving kindness," Dear said. "That combination made him a living saint in our midst. He showed us how to be Gospel peacemakers. The best way to honor him is to carry on his life mission, to do what we can, as he did, for the abolition of abolish war, poverty, and nuclear weapons, and to follow the nonviolent Jesus steadfastly."

J.L. Drouhard, director of the Seattle archdiocese's Missions Office, said he and his wife "watched our three kids grow up with Bix at St. Leo Parish in Tacoma, where social justice ministries and the Catholic Worker community were ever present. Bix has been their hero in the church, putting a face on what 'prophet' must mean in Scripture. After the kids went off to college and jobs elsewhere, Bix always asked about them by name with genuine interest and delight. He really cares about the individual facing him -- and about the deep issues affecting the one human family."

More than 300 people attended an 80th birthday party for Bichsel at Holy Cross Community Hall in Tacoma in 2008, The News Tribune of Tacoma reported.

During an August interview with the Tacoma newspaper, Bichsel was asked if he had any regrets. He said he wished he had done more.

"I wish I had been more conscious of the call to peace and nonviolence" earlier in life, Bichsel said, and urged people to seek "the divine works in all people and to trust their calls to reach out to others, to be more human."

In a 2008 interview, the Jesuit told the Tribune: "I never got the sense that I am a lawbreaker or that I am a criminal. I am an enforcer of the law" as reflected in the Principles of the Nuremberg Tribunal or international laws on human rights.

The Tribune obituary noted that Bichsel was often "a lightning rod for praise and criticism," citing as an example his helping organize a 2009 group's trip to Japan -- the "Journey of Repentance" -- to ask forgiveness for the atomic bombings of Hiroshima and Nagasaki that precipitated the end of World War II.

The event "sparked an outcry from those who said it ignored the attack on Pearl Harbor and atrocities committed by the Japanese military," the Tribune wrote.

Eiger told NCR he was amazed that Bichsel had been able to take part in the daylong January action at the naval base given the priest's weakness.

"With every step, Bix was the embodiment of Christ in the world," Eiger said. "He exuded the power that comes with that -- without any ego or thoughts of self. To work with him was to be challenged to live to a higher calling."

Bichsel is survived by a brother, Jack, in St. Paul, Minn., and numerous nieces and nephews.

A Christmas prayer for peace

Statement: Jesus said welcome the stranger, not militarize the border